Navigator Songs for Mei and Satsuki

At first listen one might think that Elephant 6 was back in business and dropping albums from Farmington, Utah. This punk-indielicious sounding album might be Navigator’s seminal release—10 tracks of sweet happiness, only one of which is over three minutes. Fuzzy guitars lap at the shores of beautifully improvised percussions and vocals reminiscent of the early Elf Power give each song a sense of future perfection. Songs for Mei and Satsuki is the brainchild of Braden J. McKenna, an entire album inspired by Oscar-winning director Hayao Miyazaki’s Anime films. Every track is unnamed but if you can guess which movies belongs to which songs send Braden an e-mail; If correct you’ll receive a super-happy-fun surprise in the mail.
MySpace.com/BradenJMckenna 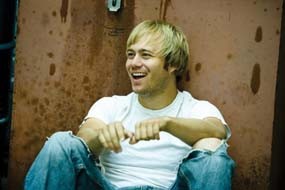 Chris Merritt Pixie and the Bear

It’s always nice to hear a local album with production value rivaling any major record label release. Often, a double-disc CD requires skipping through filler tracks to find the good stuff, but Pixie and the Bear just needs to be played—and played. Chris Merritt’s pipes bear a faint similarity to Chris Martin’s, minus the Coldplay front man’s dead-behind-the-eyes lyrics. His somber approach to love and relationships grow from heavyhearted, to joy in the wake of breaking up. On “Be Found,” a gem on the Bear, Chris sings, “You’re thinking of the worst thing to say/You’re waiting for the worst time to say it,” in the tale of a lady who’s kvetching is justified because she’s so breathtaking. This album could easily replace the tunes currently being played in coffee houses and Cold Stones throughout the state.
MySpace.com/ChrisMerritt

The buzz about La Farsa hit streets before most folks had a chance to hear them. Usually, when this happens with any art form I’m overly skeptical, but Unbraidable creates a decent foundation for any local artist to build on. We all have to start somewhere right? The album delivers moments of beautiful male/female harmonizing that too often gets washed away with uninspired drumming or nonsensical “ohs.” Just a rearrangement of the tracks could have improved the end product, instead of starting with the title track LF could have opened with the semi-stronger “Elephant in the Room” which could have bled right into “Transparent.” At that point the Mars Volta-tinged “El Vencedor” could have brought the album to a peak with its luscious Spanish lyrics and opened up to the cascading of alt-country final tracks. They’ve got almost all the pieces of the puzzle. We’ll have to wait to see what the future holds.
Myspace.com/LaFarsaBand