Energize your social conscience with documentaries about the music of revolutions. 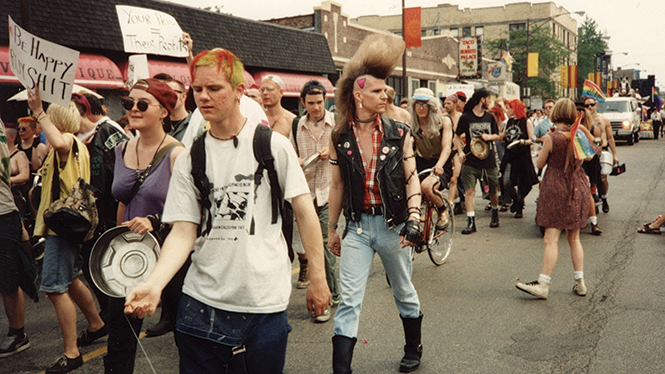 In honor of both Pride Month and the ongoing (and now-global) uprisings against systemic racism and police brutality, below are some educational and quite fine documentaries about the music that provided the soundtrack for social movements, singing out the struggles against homophobia, racism and repression in years past.

Soundtrack for a Revolution (2009): The music of the revolution has been the topic of much conversation in music lately, with media outlets compiling lists of the songs for this societal moment. From the resurgence of the 2015 protest hit by Kendrick Lamar, "Alright," to short moments of gospel return from 12 year old Keedron Bryant, to tunes from the surging movement across the pond like "My Block" by Che Lingo, this moment has got music on its side. Soundtrack for a Revolution shows that it's not the first time. Featuring interviews with early civil rights protestors and musicians like Harry Belafonte, Soundtrack explores the nuanced timeline of the movement, while seamlessly tracking the songs that accompanied it. Protesters drew on African-American spirituals that had helped their ancestors withstand the trials of enslavement, just as much as they turned to folksy songs written by white "hippie" allies like "Gonna Sit at The Welcome Table," which was used during sit-in protests. With covers by Wyclef Jean, TV on the Radio, The Roots and more, this documentary—along with its vibrant depictions of what the revolution really looked like—is a great lesson on an important time and place, and its sound. (Free on Tubi, or for rent on iTunes)

Queercore: How to Punk a Revolution (2017): Most outsiders are familiar with DIY, and none as much as the punks, who by virtue of rejecting pop and parental expectations, celebrated volume, excess and outlandishness. Still, for a pair of queer punks in 1980s Toronto, the straight punks they knew seemed to have a limit to what kind of weirdness they'd accept; despite hatred of normative values, punks couldn't get down with the gays. But one of the tenets of DIY is that you make what you want if you can't get it where you are, so the two friends decided to fake a gay punk scene where there was none. Co-founders Bruce LaBruce and GB Jones started J.D.s, a gay punk zine that spearheaded "queercore"—a play on the macho, late-punk hardcore genre, which had signaled the end of the more freewheeling early punk era. J.D.s inspired others as far off as San Francisco, whence came Homocore—a zine which listed queer punk music as often as it ironically showcased homophobic punk songs. Alongside breakneck-speed snapshots of the songs and singers that soundtracked the stirrings of a queer punk community, Queercore is a colorful testament to faking it 'til you make it. (Free on Tubi)

Pick Up the Mic (2006): For all the advances we've made, certain realms like hip hop are not generally welcome spaces for queer people (cue Offset rapping about how he can't "vibe with queers"). That's the message that Pick Up the Mic opens with, as featured queer rapper Deadlee raps about the ironies of gay existence, both in relationships and in hip hop, with the constant refrain, "No fags allowed" thrown back at an imagined, bamboozled straight audience. The documentary explores the niche community of gay hip hop, which is both a response to the homophobia of mainstream hip hop and rap, and a refuge/outlet for young queers on the fringes, like the Bay Area rapper JenRO. Shot primarily in the early aughts at the PeaceOUT World Homo Hop Festival in Oakland, Calif. and stretching across the country to New York City's Peace Out East festival, the film is a touch dated by 2020's standards, but still provides a fascinating snapshot of hip hop crafted and honed for a queer community outside of the white, queer paradigms being folded into the mainstream at the time. (Free on Tubi, or rent on iTunes)

What Happened, Miss Simone? (2015): Detailing the lonely life of one of music's greatest artists, What Happened, Miss Simone? details Nina Simone's career, and the activism that derailed it. Shunning commercially successful songs for new civil rights-inspired ones, she was swept away by the spirit of the movement, and it showed. In one of many rare interviews featured, she says of her political music, "I choose to reflect the times, and the situations in which I find myself. That is my duty. And at this crucial time of our lives, when everything is so desperate, when every day is a matter of survival, I don't think you can help but be involved." When singing songs like "Mississippi Goddam" at one rally, she claims she lost the fullness of her voice, never to return. Besides being an insightful portrait of such a complicated, beautiful artist, the documentary instills viewers with the urgency and passion Simone must have felt at that point in her life, feelings which would later hinder her career. Viewing it now, there's a sensation that this can't happen again. Hopefully, like Nina Simone, we can find the right songs, and get it all right this time. (Free on Netflix, and buy and rent on iTunes)