Music Monday: A full summer weekend in review and the week ahead

This Monday feels different, right? There was plenty to celebrate this weekend: the downtown culmination of Utah Pride Week, the two-pronged kickoff of Salt Lake City Library’s annual HUM (Hear Utah Music) project, the first big music festival of the summer in Ogden. Heck, even if you weren’t catching a metal show, a DJ night, or a dance party at one of SLC’s many fine venues on Friday, Saturday and Sunday, it still feels like a switch got flipped.

Back to the music for a minute, though—especially because this Monday feels like the beginning of something big. Fans of New Orleans jazz, black metal, Australian surf-punk, Texas swamp-rock, and down-tempo hip-hop all had reason to celebrate with shows at The State Room, Kilby Court, The Royal and The Urban Lounge. Sonoran death metal icons Gatecreeper and East Coast grindcore heroes Full of Hell blasted through the walls of Diabolical Records downtown with multi-faceted local support from Sympathy Pain, Hoofless, and Salt Lake Electric Ensemble. Slut City Punx threw another house show rager, inviting Oregon’s Not a Part of It and Idaho’s Cockfight to shred with locals Cyanine 14, Press Gang Union, and Power Beer.

By the time we crashed on Sunday night, sunburnt and sore from marching and parading with tens of thousands of our closest LGBTQ allies by day before reveling in that spirit of inclusivity at clubs throughout the city by night, it felt like we had lived two, three, even four weekends. Rest is good, especially after celebrating something so important to our community. 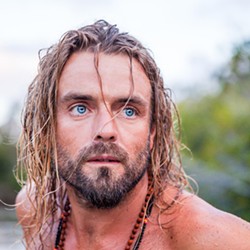 But don’t rest too long, as the beginning of this week gives summer the unofficial kickoff it deserves. Tonight alone, you can see local rock with Tenkaras at Kilby Court, didgeridoo dirges with Aussie Xavier Rudd (pictured) at The Depot, sad clown vaudeville with Puddles Pity Party at The State Room, goth-wave with Cold Cave at The Urban Lounge, avant-garden chamber folk with Free Salamander Exhibit and Faun Fables at Metro Music Hall, and Arrowfest arena rock with Styx, Joan Jett and Tesla at USANA Amphitheater.

Tomorrow, you can get your swing on with Big Band Dance Night at Gallivan Center, get crunk with Shoreline Mafia at The Complex, get sad with another night of Puddles Pity Party at The State Room or get hyped with Kilby Court’s Crucial Summer Series featuring hardcore punks FireBurn, Seven Daggers, DTA (Don’t Trust Anybody) and Stay Away. And that, miraculously, isn’t even everything—on June 7, the Ogden Twilight bursts to life with legendary psych rockers The Flaming Lips (more on that in the upcoming City Weekly issue), along with a handful of other hot shows next weekend.

Whew. Take a moment this glorious Monday to soak in all of that. Summer is here; how you soundtrack it and how you enjoy it is all up to you.