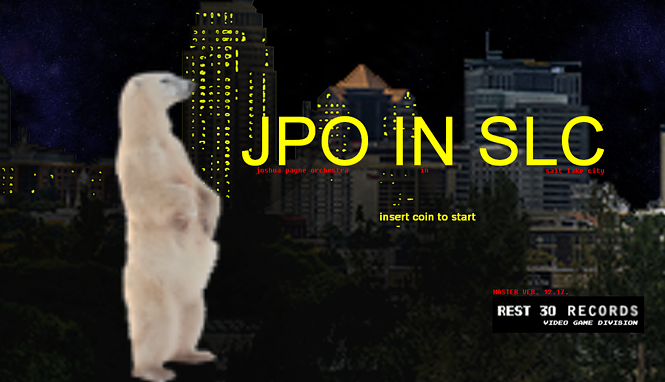 David Payne loves video games. The man behind one of Salt Lake City’s best and longest-running rock bands, Red Bennies (and myriad other musical projects), has enough video games and pinball machines in his home to call it an arcade. He builds hyperfunctional electric guitars equipped with his own Fibralten tremolo system, and hyper-directional speaker cabinets that look like the classic cabinet video games. He’s also grafted his iPhone onto his keytar. It’s no surprise, then, that he’s developed his own game, JPO in SLC.

The game follows the imaginary exploits of the Joshua Payne Orchestra, the “very special band” led by his brother. Before the JPO relocated to Los Angeles, the nine-piece orchestra used to play guerilla shows at secret outdoor locations on Fridays at midnight during the summer. JPO in SLC carries on that adventurous, avant-garde spirit in some of the same settings that the JPO played.

In a text message, Payne explains that the game is a 2-D side-scrolling shoot-’em-up, (“shmup”) game, a format that was popular in the ’80s (see 1942 and Gradius) but is now rarely used. JPO in SLC finds the player character flying through Salt Lake City dressed as Joshua Payne’s spirit animal, a polar bear, while the JPO’s music plays. As enemies attack, the bear fights back with lasers and missiles, and JPO members toss football power-ups to the player character. Payne says the levels are designed to look like the JPO’s old haunts (Bar-X, various secret show locations). The story centers on the Salt Lake City tornado of 1999, and “shows all the trees being ripped out of Memory Grove.”

Surprisingly, Payne didn’t build the game from the ground up. He might have some serious maker skills—which enabled him to design proprietary controls for it—but when it comes to software, he calls himself a layman. To create the game, he relied on an “extreme beta” of revolutionary software developed by a couple in England. “It’s in a technically non-existent medium,” Payne says. “There is no other program that will let a layperson make a game like this. I could be the only layperson in the world to do that.”

Payne uses the game, which took 500 hours to create over the course of a year, as “a device to play shows,” banking on the popularity of geek culture and the advent of arcade bars. Now, when Payne books a gig, he brings the game—housed in an old-school cabinet, of course. Afterward, he leaves it at the venue, set to freeplay for the bar’s patrons to enjoy until the next gig. But it’s more than that.

“It’s a first-ever, layman-made game about a first-of-its-kind band from SLC, [created] on a 50% finished, first-of-its-kind program from England, in an almost-extinct format,” Payne says. “So it’s a piece of fine art, specially designed, genre-wise and hardware-wise.”