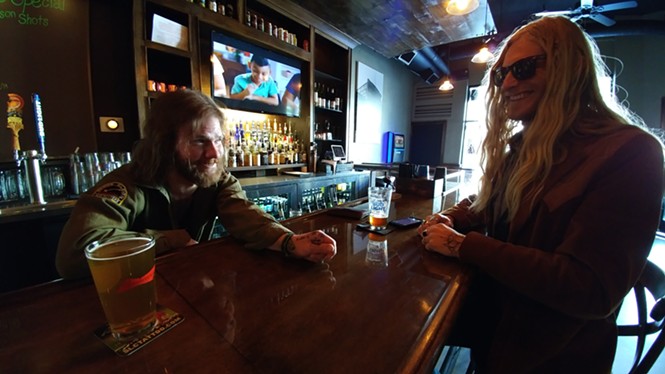 Sam Smith Sticks Around, Opens Bar in Ogden
One of Utah’s best singer-songwriter-bartenders almost landed a Best of Utah pick for “Best Worst Local Musician’s Exit.” In fact, I’d already written it up based on early morning/late night Facebook Messenger conversations with Smith after he poofed away to Thailand and then Venice during the summer to work on a book and perhaps never return.

“Quiet Oaks, Max Pain & the Groovies, Jordan Michael Young, Crook and the Bluff—they’re all gone or headed that away. But the namesake of the Samuel Smith Band went off to Thailand, then Venice, then bought a bar in Brooklyn. This, after dropping two excellent albums simultaneously in January: One with the SSB and another with his new band, Pig Eon. It sucks that so many talented folks are splittin’ town. Sam has his reasons, but here’s hopin’ something leads him back here. In the meantime, good luck to him and all of the above. May you find what you seek.”

Then Smith disappeared. Since I couldn’t get in touch with him to check facts and get an update, I yanked the pick. Then he popped back up right after the deadline, saying he was still at work on his book and that he’d decided to purchase a bar in Ogden. He’s now the new proprietor of The Yes Hell (formerly D&R Spirits) at 2430 Grant Ave., and he issued this invitation last Thursday on Facebook:  “My dearest friends, I have purchased a bar. There will be more information on that to come. Right now I need to start booking music. Please PM me if you like to be paid well for what you love to do.”

So not only do we get to keep Smith and his music in town, he’s gonna help us hear more. That’s such great news that it might be the first BoU pick of 2018—which is when The Yes Hell will open, anyway. “It’s a shithole, man,” Smith told City Weekly this morning in a phone interview. He says there’s a ton of work to do, including installing a new Bose sound system. “It’s a biker bar, that’s probably nicer than saying ‘shithole.’ But to me, they’re synonymous.”

Tony Holiday: Now Booking The Acoustic Space at the Gateway
Bluesman Tony Holiday is now booking The Acoustic Space Down at The Gateway. “I have a stellar lineup already till February,” he texts, “and an open mic on Thursdays run by the up-and-coming blues band The Arvos.” There will be two Tom Petty tribute shows on Dec. 14 and 15—the first features Royal Bliss, and the second includes various local acts including Talia Keys, Michelle Moonshine, the Wayne Hoskins Band and Zach Griffen. Watch the venue’s Facebook page for event details. Since the venue is all-ages, this is a great chance for younger fans to see local acts that almost always plays bars. The Acoustic Space at the Gateway, 124 S. 400 West, all ages.

TUESDAY 11/14
Michael McDonald, Marc Cohn
Who doesn’t like Michael McDonald, the very embodiment of blue-eyed soul? But it’s not his eyes that matter: It’s his voice, and his songs—which we’ve heard in bands like The Doobie Brothers and Steely Dan, and of course in his solo work, including his new album Wide Open, featuring his first new original material since 2000. If you missed him at the Depot a couple of years back, or the Peppermill last August, the Eccles Theater is gonna be a great place to hear him sing his blue-eyed ass off. On “Hail Mary,” from the new album, he asks, “Does my voice still carry?” Dude. You’re Michael Fucking McDonald. Only a fool would believe it wouldn’t. And fans: If you think you can’t afford tickets as low as $22.25 if you use the promo code THANKFUL at this link. Eccles Theater, 131 S. Main, 8 p.m., $22.25-$89.50, all ages, live-at-the-eccles.com