As beautiful fall weather descends on Utah, so does another wave of excellent touring bands, starting on Monday, Sept. 24 with hip-hop royalty: original Wu-Tang clan member U-God, who performs at Metro Music  Hall with support from D.E., Technition, Sin the Hidden Sound and SouLyricist. U-God’s deep, deliberate delivery provides a cautious contrast to his compatriots’ freewheeling flows, but his narrative voice shines in 2018 memoir Raw. “At the beginning of my career, I wasn’t really focused,” U-God told The Quietus in March. “I was a wild street guy who was making a transition into music. Now that I’m one hundred percent focused on my craft, you can see the difference in my work. If you want something, you have to focus on it every day.”

On Tuesday, Sept. 25, Dave Alvin and Jimmie Dale Gilmore reprise their 2017 tour full of spontaneous reinterpretations of old blues and folk classics at The State Room, this time with a backing band, The Guilty Ones, in tow. Setting their chemistry to tape on Downey to Lubbock, Alvin and Gilmore prove that country roots run deep—and that California (Alvin’s home) and Texas (Gilmore’s home) have more in common than we think. 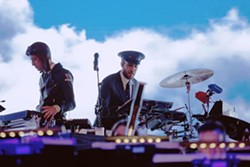 All the way from Australia, electronic duo Hugo Gruzman and James Lyell of Flight Facilities bring their uplifting pop to the U.S. on Tuesday, Sept. 25 at Soundwell. From viral videos starring comedian Reggie Watts to a string of chart-topping singles to entrancing light shows and brilliant aviator garb, Flight Facilities bring the party with them wherever they go. On their current West Coast dates, they’ve got Kylie Minogue and Phantogram co-writer Mereki providing guest vocals—and local legend Jesse Walker of New City Movement will be opening (stay tuned for much more from him).

Call it gutterbilly, gypsy punk, or hobocore—what you can’t deny is that Michigan-born, road-tested outfit The Goddamn Gallows give it their all. After drifting west and perfecting their hell-raising Americana in dive bars, squatters’ camps, railroad yards and dingy warehouses around Portland, Oregon and Los Angeles, the five-piece has started to incorporate heavier influences like stoner metal and murder punk while hand-crafting their own instruments. Frontman Mikey Classic amplifies his banjo with a dual pancake pickup system but also stuffs it with T-shirts to reduce feedback. “Then I turn it up fucking loud so we can thrash,” he told Folio Weekly last year. “That’s what The Goddamn Gallows do best: Play loud as hell.” Catch them with Gutter Demons and Grave-Robbing Bastards at The Urban Lounge on Wednesday, Sept. 26.

While we’re embracing the foul language, don’t miss Los Angeles DJ Destructo’s “F**king S**t Up” (his asterisks, not ours) tour stop at SKY for their weekly Therapy Thursday series on Sept. 27. Destructo’s latest single features Busta Rhymes’ rapid-fire flow locked into an apocalyptic groove. With past remixes for Depeche Mode, Giorgio Moroder, Major Lazer and Rob Zombie under his belt, it’s clear that Destructo (AKA Gary Richards) is serious about his stated goal: “making dance music dangerous again.” But hip-hop is his forte, as he’s procued beats for old-school legends like Too $hort, Warren G and E-40 along with new jacks like D.R.A.M., YG and Freddie Gibbs.