Music | Nap Time: After a tornado of blog hype, Black Kids frontman Reggie Youngblood could use a rest 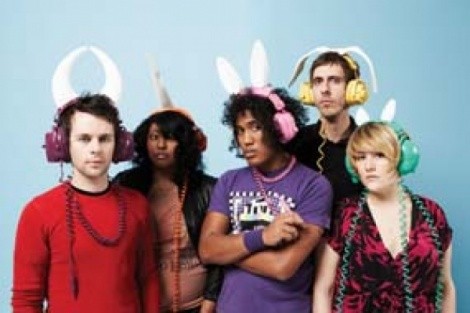 The exhaustion just leaks from his voice. Every word that comes out of Reggie Youngblood’s mouth seems to beg for a nap. “My body is just wrecked,” he says with as much laughter as he can muster. “I always used to laugh whenever rock stars used to cancel tours because of ‘exhaustion,’ but now I understand where that’s coming from.”

In fact, it’s taken damned near superhuman strength for Youngblood to get to this point. The Black Kids frontman has been doing his impersonation of a spastic electron for the last year, moving constantly at breakneck speeds typically without pause. Ever since the relatively young group posted its independently released debut EP Wizard of Ahhhs on MySpace last summer, Black Kids—only two of whom, Youngblood and his sister/keyboardist Ali, are, in fact, black—has been moving nonstop.

The reason: new media. Black Kids have become a success thanks almost solely to the power of those music geek Gollums who control the blogosphere. Several key critics started touting the group’s thick mix of influences—sprinklings of ’60s Motown with ’80s Robert Smith, touches of indie rock tossed with blatant new wave. Within a couple weeks, Pitchfork was raining praise on the band. From there, the hype was unstoppable. The press converged in an avalanche of adjectives. Then came a record deal in England. A few hit singles over there followed. So did a deluge of British press and adulation. It was like watching a well-worn script unfold, one that has played out twice a year since The Strokes treated its first trip to London as an opening salvo in a bid to take over the world.

But the thing that makes Black Kids stick out is Youngblood himself. While the Florida-based band blends all those disparate elements with a playful ease—check out the giddy dueling keyboards battling it out with Own Holmes’ on Stax-ready bass line on “Hurricane Jane” for evidence—Youngblood always plays the star. Part of the reason is his sheer presence. He’s a big guy. He holds his guitar like a M-16 at the ready. And he twitches in epileptic fits that make you wonder if he, his guitar and everyone around him are about to go off.

The other reason is his willingness to treat gender identify as a plaything. He doesn’t dress like Bowie circa ’72, but he does borrow Ziggy’s willingness to distort language. On “Hurricane Jane” he drops the line, “Oh, you’ve been playing nice, but I can see it in your eyes/ You’re thinking, ‘Christ, he’s everybody’s girl.” And on “I’m Not Gonna Teach,” Youngblood coos, “You are the girl that I’ve been dreaming of ever since I was a little girl.” It’s one word, but it’s not subtle—and Youngblood knows it. In fact, it’s the way he wants it; he wants to screw with people. Those who can look beyond it and just have fun—Youngblood knows those will be real Black Kids fans. The others: Well, he’s not sure he wants you around.

“That stuff has really been polarizing people lately,” Youngblood says. “A lot of younger kids tell us that they want to like the band but they can’t get past this idea of us playing with gender. I just got it from artists I love: Prince, Morrissey, Bowie. It’s not a new concept. And it just makes things more interesting. If I said ‘little boy’ instead of ‘little girl’ on ‘I’m Not Gonna Teach’ that would be the most boring line ever. Now it’s more dangerous. So why not fuck with it?”

The only problem is, if Black Kids wants to translate its success in England to more conservative and cautious America, the gender issue is going to keep popping up. While the band shockingly doesn’t have a record deal in the United States yet—“We’ve had more success in Mexico, for some reason,” Youngblood says in all seriousness—the group is beginning a massive home-country push. The group flew back from London to Los Angeles two days ago—jet lag: another sleep killer—to play Coachella, a massive three-day festival in the California desert.

Youngblood knows this is a key time for the band, so sleep—well, it’s not going to get better anytime soon. So he’s going to smile, give it his all and worry about taking time off for “exhaustion” some other day.

“I feel like I’m about to fall down, actually,” he says with a hint of exaggeration. “But this is what I’ve been working towards for years, so you just do it. That’s all that matters.”