Music | Outside In: Salt Lake City’s Rope or Bullets are going to make you listen 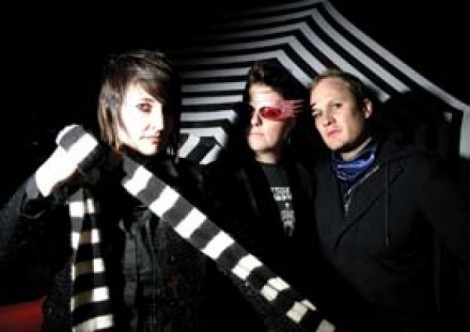 It’s early evening on Valentine’s Day, and Junior’s Tavern is starting to buzz with the likes of desperate lonely hearts looking to ease their pain in the bottom of their pints. As if offering a reprieve to such overt despair, the members of Salt Lake City’s Rope or Bullets sit three deep at one of the small booths lining the narrow tavern wall.

So what will it be? Rope or Bullets?

Although the name infers a buffet of options for doing oneself in, the name is actually a nod to Walt Whitman. Apparently, after a particularly hard day visiting the frontlines during the Civil War and witnessing the class violence and race cruelty that were par for the war course, Whitman wrote, “I do not feel it in my heart to abuse the poor people, or call for rope or bullets for them, but that is all the talk here.”

“My friend Jake and I were brainstorming, trying to come up with a name one night,” explains founding member Heidi Hull. “I remember coming across the line way late when we were both tired; it was the last thing we read before falling asleep. In the morning, it was still stuck in our heads. That’s when we knew it was right.”

Playing under that moniker for some time now, the electro/organic new-wave trio (including fellow founding member Jarom Rowland and relative newcomer drummer Claire Passey) has just settled into their current configuration. For Passey, the opportunity to join one of her favorite local bands was hard to pass up. “I’ve been a fan for years,” she says. “So it was fun to be able to come in and do my own thing. I started playing with Heidi first and then Jarom came back into town, and the three of us just worked.”

According to Rowland, it worked because Passey has “the most amazing energy. She really has helped us to go new places. She’s also helped us to feel that energy again, that energy that makes this fun … and recording has also done that.”

While Rope or Bullets released a six-song EP in 2004, they consider recent studio efforts as their first proper outing. Set for an April street date, the album will coincide with several CD release shows in Utah and also (hopefully) a late summer/early fall nationwide tour.

“We’ve been working with Jud Powell of Le Force,” says Rowland. “He has been so great to work with because he feeds us and helps us to work out ideas.” Hull adds, “It helps that we went into the studio without any egos, and he was willing to work with us and how we create our music.”

One thing they decided to do while working with Powell at B-Side Studios was to record the album on reel-to-reel. Even though that makes things more difficult when trying to capture the final on tape, the effort seems important to the band. “We like the organic sound quality,” says Rowland. “It’s perfect for us because we are kind of lo-fi, and it lends itself so much better to our sound.”

According to Rope or Bullets, that sound has been somewhat ostracized in the local queer community, a trend they hope to reverse. In fact, all three of them spoke passionately about being ignored. Sure, the trio laughs when bringing it up but you can tell that they feel like outcasts within their own community. Apparently as large and diverse as Salt Lake City’s GLBT population seems to be, its members tend to embrace one genre and ignore others.

“The sound here in the queer community is either alt-folk type stuff or really bouncy house music,” says Rowland. “We just aren’t in either of those worlds. I think that a lot of queer people here in Salt Lake just don’t know what to do with our look and sound. We really don’t want to sit out anymore, so we are going to make them listen, we’re going to bust down their doors.”

Hull notes that they aim to reach out and play more queer-friendly festivals and venues. For their first act, Rope or Bullets has been invited to play a benefit concert with the Purr Bats (their favorite local band) sometime near the end of next month, with all proceeds going to benefit the Pride Center. Until then, their upcoming gig opening for MEN (the new remix project featuring members of Le Tigre) seems a perfect fit for these Salt Lake City misfit rockers. The evening is being touted as one serious dance party and their brand of sonic noise is leaning toward electro-dance-pop.

“That’s definitely where we have purposefully taken our sound,” explains Hull. “We’ve gone more and more in that direction on our new record, and I imagine the more we play, the more we will continue down that path. So people should come on out and have fun.”

How could it possibly live up to spending Valentine’s Day in a local watering hole in the wall? Surely it can’t, but what else are your options? Rope or Bullets?