Clesh's Small Talk, Beatles are Back with SLC Concert Cruise, Eixo Finds Release in the Pandemic, and more. 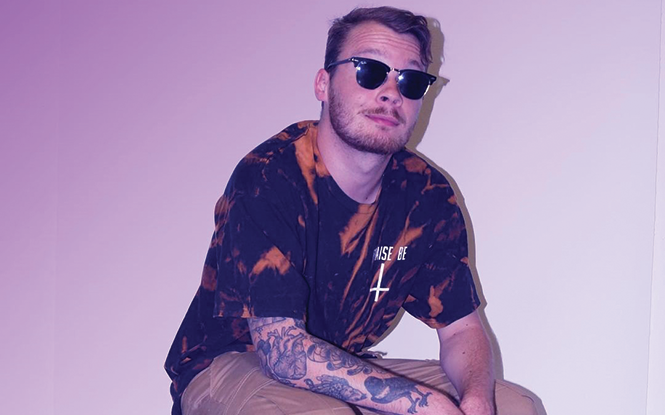 Clesh's Small Talk
Prior to his February 2021 album Small Talk, local artist Clesh has been more of a collaborator, putting out albums with fellow local Earthworm, like the 2020 EP they released together called Always the Sun. But Small Talk is a small treasure of Clesh's own. Featuring a few appearances by other talented locals like Cherry Thomas, Benjamin Major, future.exboyfriend, Dumb Luck and of course, Earthworm, the album is a playground for Clesh's beat-driven and slightly trippy synth compositions, on which his friends play. Opening with "Innocuous," the album's tone is certainly set as lighthearted—video-game plings sound off delicately in the distance of the song's immediate landscape, an easy-to-survey one made up of slight scratching, clear ringing synths and easy-hitting beats. It sounds simply like good, clean fun. On the following track, Earthworm enters, laying his raps over a slightly more intense layout. The only features who don't rap over Clesh's music are Thomas and future.exboyfriend. For Thomas' part, she immediately seems to be in her crooning element and a little sharp, invigorated into serving up a more clipped R&B delivery by the beats Clesh provides. All over the record, '90s DJ scratch culture is called up to zip lazily alongside smooth jazz parts ("A Whole Day"). The whole thing is carried calmly along by warm, clear beats, loungey synth keys—though modern hip hop vibes still come through on tracks like "Chemtrails." On "A Beautiful Feeling," future.exboyfriend chimes in with gently computer-filtered vocals, a sweet addition to the trippy vibe. Small Talk feels like that—full of brief, engaging songs that just hit the spot. A solid look at what this local artist is capable of, you can find it wherever you stream. Follow him on Instagram at @cleshmusic.

Beatles are Back with SLC Concert Cruise
Bikes and Beatles: This is how we do pandemic spring in SLC. A tradition established last year by the bookers of S&S Presents to conduct roving, outdoor shows safely, Concert Cruises are back with the warm weather, and you'd better get tickets quick—these limited-capacity shows sell out fast. If you missed our coverage about it last year when the Concert Cruises first began riding the streets of SLC, here's how it works: Different musicians are stationed in several secret locations where, once bike-riding attendees arrive, they perform a pop-up show for 20 minutes. At that point, the riders move on to their next location and the next mini-show. The Concert Cruise is composed of two different routes, five stops and a sizeable-ish limit of 20 people (riding in small household groups distanced from each other household group). For this inaugural Concert Cruise, Beatles is the theme, likely because the cover sets were such a hit last summer. Bands performing covers will include Major Tom (of local Bowie cover fame), Lord Vox, Static Replica, Mitokandrea, Drusky, Marny Proudfit, Spirit Machines, Cera Gibson, Nicholas James and The Proper Way. The shows are 18+, welcome to all forms of rolling transportation and also offer a $1 GREENbike day pass with ticket purchase for anyone who wants to go but doesn't have a bike. This Concert Cruise will also land at an after-party show in The Urban Lounge's backyard, featuring Static Replica and Starmy. Beatles SLC Concert Cruise starts at 3 p.m. on April 10, and the after-party show starts at 6 p.m. Visit sartainandsaunders.com for more info on COVID protocol and to get tickets, which are $35.

Eixo Finds Release in the Pandemic
Many artists have leaned into dropping singles with little promotion during the pandemic, for obvious reasons, and Eixo is one of them. "I realized I was being too precious about my music," he says of when he used to promote more around releases, on a longer schedule than the freer one he utilizes now. "I had a huge backlog of songs that I loved that I wasn't releasing because I had to focus on 'amazing songs that people will love.' I don't care about that anymore. I am a craftsman and my joy comes from the creative process. Releasing is just a byproduct of my 'therapy' in the studio," he explains. With a penchant for soft club beats and trance-like synths contrasted by guitar parts that go from delicately melodic to dramatic rock riffs, Eixo's compositions are many, and often complemented by vocal features and collaboration with local artists like Ryan Innes, Jordan Clark, Kelly Fellows and Hannah Lovelady. This past year, he's started releasing songs every two weeks, with upcoming release dates stretching into August of this year. "I'm a workaholic. If you want to torture me, make me sit and watch an entire movie. My restless soul needs to be doing something at all times, so I always have a big backlog of songs," he tells City Weekly. Mostly, his "feverish songwriting pace" is spurred on by the profundity he finds in making music that makes him feel something. "Sometimes I will work on an arrangement for hours and end up creating something that sounds like pure joy to my ears," he says. "If I feel it deeply, it is a good song and I put it out." He also points out that if it touches his heart, that's all that matters in a release. He plans to keep this up even after the pandemic, and interested parties can find everything he's put out so far on Spotify. Follow him for more updates on Instagram at @eixomusic.

This Weekend: Every Event That Was Canceled in 2020 Is Happening
Last year was quite a doozy, filled with little besides a bevy of cancelations. But in a sudden turn of events, in addition to the lifting of the mask mandate on April 10, Gov. Spencer Cox has issued a new order, one that some are already saying is equally as baffling: All the events that were canceled in 2020 are to return for one pre-mask-mandate-lifting celebratory weekend event—Freedom Weekend (Spen just couldn't wait until the Fourth of July). Beloved summer events like the Twilight Concert series will take over Pioneer Park and the Gallivan Center for the entirety of the weekend of April 2 through 4. Attendees can expect acts the fest has already booked two or four times already in the past, and for some reason, we will all still go. It will also be free again. For its part, Ogden Twilight is waiting until the last-minute release of SLC Twilight's full lineup, so that they can one-up them as usual, partly by flaunting what feels like a devil's pact of a deal they've got with The Flaming Lips. As for other famous downtown events, Utah Pride Festival and the Utah Arts Fest will be sharing Washington Square. There, every single singer songwriter with an acoustic guitar in the city will battle to out-volume the drag queens. For those Sundance fans who are too poor for a pass and always wonder what happens in the ASCAP Cafe sets, appearances around town at local gas stations will finally let us in on what goes on in there. And if you're thinking, "hey, what about Das Energi?," it's been left off the list of weekend revelry because the famous EDM festival did in fact happen last year—with the power of dubstep, a portal was opened out by the Saltair, and the festival plus all the attendees were swallowed whole, into another dimension where presumably they are still raving on. If this sounds like a weekend from hell, good thing, because April Fools!

Song of the Week: "Be Sweet" by Japanese Breakfast
X-Files has, to my limited knowledge as a millennial, always been a popular show—after all, who doesn't want to believe? Nowadays, it's accessible on streaming platforms, and it seems to be going through a renaissance of sorts, if the references to it by young artists are anything to go by. Joining artists like Phoebe Bridgers, whose 2020 album Punisher was sprinkled with little references to spaceships, feeling a bit alien and wanting to believe, fellow millennial indie sweetheart Japanese Breakfast (Michelle Zauner) recently came out with a song and a video that riffs on the famous phrase. Though the song focuses lyrically on just wanting an implied loved one to "be sweet" to her, one lyric in particular allowed her to craft a super campy video homage to the series. She sings in her typical high-energy, crooning way "make it up to me, you know it's better / be sweet to me, baby / I wanna believe in you / I wanna believe in something!" From that repeated line, a kooky X-Files-themed video comes to life, directed by "J. Brekkie" and alongside Mannequin Pussy's Marisa "Missy" Dabice, who dons the red Dana Scully wig. As the song's sparkly Wild Nothing-assisted synths and funk-tinged basslines play out (complete with oh-so-disco whispers of "be sweet!"), Zauner and Dabice run around in pantsuits; lean into chunky beige desktops while Zauner eats instant ramen; drive down a dark road in an old car, only to be accosted by neons flashing. Needless to say, someone gets kidnapped by aliens at the end. I don't watch a ton of music videos, but this one's charisma means it's on repeat, and the song, too. It comes as the first single for Japanese Breakfast's upcoming third album, Jubilee. Find the video on YouTube or stream the song wherever you stream.