Null's 2 for flinching
For an album that's quite the downer lyrically, Null's 2 for flinching—released March 26—is a refreshing piece of DIY rock. The EP employs grittiness that doesn't get lost in itself, maintaining its integrity thanks to quick-changing melodic instrumentals from Val Brown and Chuck Pack and the clear, constant vocals of Emily Parr. Parr's voice is low and plain, a stable slab of sound against backing instruments that shift as a heart rate does when it goes from resting to fight-or-flight. And that suits a work whose themes lie in strife, both inward and outwards; on the opener "Air Supply / Weeds," Parr sings tellingly, "pleasing you is like breathing underwater." While many of the subsequent tracks on the EP race with rhythm, "404" starts out slow, as Parr sings "I'm no angel, I dream about killing you." An interruption of tense drums in the middle is a hint at how the song ends, with a grimy cacophony of release, battering drums and a downpour of guitar as Parr continues "hope is rotting in my chest / dead like you are in my head." On the deceptively sweet-building follow-up, "Deserve To," Parr rationalizes continuing with a bad relationship by explaining self-destructive tendencies. Drums are a gentle scaffolding, and guitars swirl up around the song's lyrics: "I can't shake this feeling / I'm an imposter / I don't deserve to be happy." The EP finishes with a cover of Bjork's "Enjoy," interpreted so clearly in the style of Null that it's not immediately apparent that it's a cover. Bjork's electronica is replaced refreshingly with up-tempo drums and spare, post-punkish guitars, Bjork's iconic earnest howl transformed by Parr's downlow delivery into an expression of both despondence and aching hope. Listening to these songs, you can almost feel the knot in Parr's chest, while at the same time, these tightly executed songs make breathing room for that pressure. Find it at nullslc.bandcamp.com.

Moodlite, Brother. and Mmend at Urban Lounge
As it gets safer to go out, we have more and more great local bands to look forward to seeing. Such is the case at this upcoming Urban Lounge Backyard show, featuring Moodlite, Brother. and Mmend on April 30. Moodlite was a conglomerate of Utah transplants that City Weekly profiled in the year before everything went downhill with COVID, and it's good to know that bands like them are still around and ready to play. Moodlite hasn't released any new singles since 2020, but tracks from that year like "Bite Down" show Moodlite rippling with dubby synths, neo-soul funk and Katya Schweiner's ethereal vocals. They'll find an equally groovy partner in Brother. The Provo-based four-piece has been more than busy this past year, teasing single after single with a lot of to-do. The indie-pop group taps into all that is popular within that genre these days—dreamy, charming, slightly off-kilter synth parts, breezy, California-sunny guitars and vocal stylings that build on early indie staples like the Cold War Kids. Singles from last year like "Oxidate" promise to be engaging live; that track soars with a little bit of Americana grandeur. It seems that they just must have some larger release on the horizon, but until then, seeing them here with Moodlite is a good way to tide over eager fans. Opening for both is fellow local band Mmend, who will provide a bit of the moodiness for the night. Their 2019 album Spectator is a lo-fi, somewhat spooky synth affair, also dabbles in moody indie themes—a little Radiohead, a little Bombay Bicycle Club. Altogether, they're more minimalist and delicate than either of the acts they're supporting, but balance is important, right? These shows still have the potential to sell out fast for having limited capacity, so get your Friday night plans covered ahead of time. Show has doors at 6 p.m. and tickets are only $10. Visit sartainandsaunders.com for ticket purchase info and more. All COVID restrictions from before the mask mandate lift remain in place. 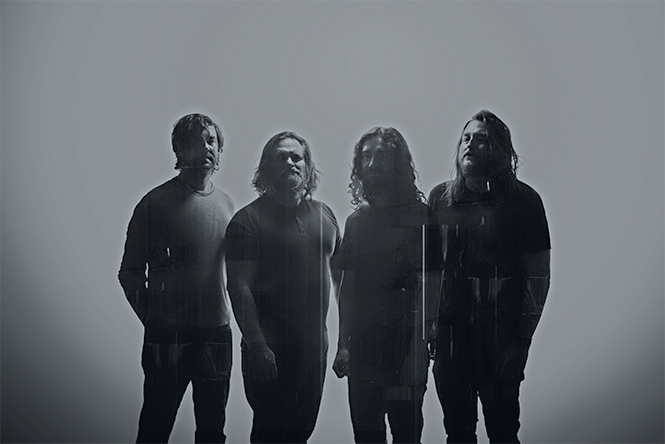 Blackshape Release Debut Album
Math rock is alive and well in SLC, and it's thanks to bands like our own Blackshape, who are releasing their debut album April 23. By working with the legendary Matt Goldman—miner of big sounds for bands like Underouth, The Chariot and As Cities Burn, and pop rock like SLC-famous bands like Meg and Dia—the band has managed to bring forth an 11-track tidal wave of math, heavy post-rock and even ambient-leaning post-metal. They self-dub as 'post-mathcore." In true math rock fashion, things start out slow on this self-titled album, with the staticky opening of "I," which then employs distorted guitar and synth parts to set the atmospheric tone. From there, "II" launches into a guitar-heavy onslaught that carries on into most of the album—it's a maze of chopping guitars and a haze of sun-shot light. The mayhem churned up in those first songs settles back down into some rhythm and delicacy on "IV," or at least until it too ramps back up into a cyclone of ripping noise towards the end. After more triumphant riffs sound off on the following track, we get an intermission of ambience on "VI," which transitions to the slow spill of yet more electricity on "VII. The album is made up of this kind of push and pull between calm and chaos. There are breakdowns galore, but the presence of ambience and math keeps this feeling mature and sophisticated. This release will excite fans of Godspeed you! Black Emperor's atmosphere or the heaviness of Thou, and really, all guitar freaks of the doomish variety. Follow Blackshape on Instagram at @blackshapemusic and stream their album when it comes out on Spotify or at blackshapemusic.bandcamp.com.

the moss Release Kentucky Derby
There is a rotating cast of local Utah boy bands doing the indie rock thing, and they're very popular. But nobody's been releasing as many singles in this early new year as the moss, so they get a win there. Like local contemporaries Dad Bod, Adult Prom or The Backseat Lovers, the moss's EP—a preview to Kentucky Derby called Some of Kentucky Derby—features some songs about girls, flush with youthful proclamations about the wants and needs of love. "Secretariat," for example, is about a private girl whose crassness is a thing to be admired by the lead singer, Tyke James, who sings "I've never heard a human use profanity so well / fallen straight from heaven you're an angel sent from hell." This is in good company with songs off their last full-length, 2019's Bryology, where they've got a song about another feisty girl, "Salt Lake City (Girl)." The songs of Kentucky Derby also build on that album's blues inclinations, while also setting the moss apart from other local bands that are more "indie first." While Bryology was at times pop, at times big rock 'n' roll, on Kentucky Derby, they lean more into the blues. For example, on "Heartbreaker," folksy, bouncing guitars contribute to a larger sound than just plain indie. "Storm Cloud Baby" also goes this route, employing a series of pauses and crashes, with guitar parts that sound as stricken and vocal as James is. the moss has been slowly releasing the singles on Kentucky Derby for the past few months, building on the name they've been making for themselves since they first started out way back in 2015. This dedication has turned up opportunities for the band even during the pandemic, like their recent feature on Audiotree on April 8, where they debuted the last two songs off of the full Kentucky Derby album. If you want to hear those two songs on the full release, look out for it on Friday, April 23 on Spotify. Follow the moss for more details and updates on Instagram at @themossband.

Song of the Week: "Your Body Changes Everything," Boy Harsher remix
As announcements for shows and festivals slowly trickle in (I even got news of a brand new one just as I typed this), one of my greatest dreams post-pandemic is that Metro Music Hall once again begins hosting its Berlin nights. Sparsely attended even back before COVID (they were on Thursday nights), the red-lit, industrial-themed nights were a brainchild of a friend of mine who was just cutting her teeth in the show-organizing world when everything shut down. They played bumping hits by grimy, sexy dark wave revival bands like Boy Harsher, who are the part-subject of this week's song of the week. Boy Harsher have a brilliant spotlight on a recently dropped album of remixes, IMMEDIATELY, featuring songs off of Perfume Genius's 2020 release, Set My Heart On Fire Immediately. Names like Actress and A.G. Cook appear on the remix list, but it's the Boy Harsher effort that's got my heart. The duo tackles the deeply cool song "Your Body Changes Everything," a cascading, art-popish song with late-'80s quirks that make it ripe material for Boy Harsher's synthetics. They turn the dreamy, meandering track into, of course, a dance track. Cold beats pick up the pace, and the winking flute-ish synth part that is peppered throughout the original provides an eerie beat of its own. Perfume Genius's vocals become less ghostly and melancholic, more strife-stricken as they're pushed to the front. Gothic, long-drawn synth parts extend the drama and the darkness, and Boy Harsher vocalist Jae Matthews drops in to pant, "can you feel my love?" in her uber sensual way. It's a fun track, one that makes me miss dancing. I hope to hear it at a Berlin night some night not too far from now.