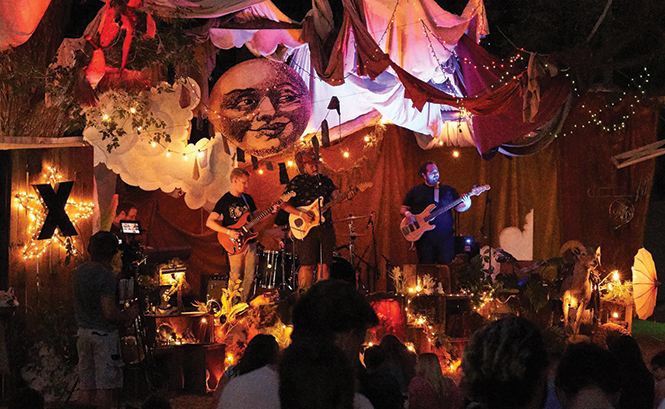 Fork Fest Announces June Date
Utah County's Fork Fest was one of the only Utah festivals to go on as planned last year, though they did, of course, adjust for social distancing and other COVID precautions. And as for 2021, the Harrington Center- and Velour-presented event is back this year on June 19 at Art Dye Park, and they've already got a lot worth looking forward to. For starters, iDKHOW (short for I Don't Know How But They Found Me) will headline. The local band features the notable, SLC-famous artist Dallon Weekes, who before joining Panic! At The Disco's lineup for a few years, was at the center of the popular local band The Brobecks. The rest of the lineup dropped April 20, and includes tons of other beloved locals, especially those from the Utah County scene. Bands like Sego seem to be coming out of what felt like a hiatus of sorts, as well as big acts like Fictionist, Book on Tape Worm and the legendary Mindy Gledhill. Lizzy O'Very, recently of American Idol fame, will make an appearance, too. The long list of locals then goes on as such: Joshy (FKA Joshy Soul), Libbie Linton (of Mideau), Lantern by the Sea, The Solarists, Goldmyth, OFI, Mia Grace, Mia Hicken (of Drusky), Kin Lodge, 19 Miles Per Hour, Indigo Waves, Sunfish, Rally, Texture Love, Iris, Joseph Moore, Nicole McMahan, Mt. Everett, Beeson, Seth Brown and Utah COPA. Two things are for certain: These locals rock, and Fork Fest might be the single most locals-packed day of the year in Utah. Tickets range from GA for $25, $10 for kids, $45 for VIP tickets. Visit forkfest.org for tickets and info.

The Brown Bag Concert Series Kicks Off
A low-key Salt Lake concert series is kicking off this Thursday, April 29, just in time to welcome in spring. The Brown Bag Concert Series celebrates local artists, planting them in interesting locales around the city to add vibrancy to Salt Lake City, while giving artists paid opportunities to perform. The first performance kicks off with music from local indie rock project The Gontiks, who will also demonstrate the new virtual hybrid model the Brown Bag Concert Series is employing during COVID. That means IRL sets will be happening still in cool spots around the city, but they'll also be streamed online, all for free. So, The Gontiks will kick things off and set up at the Capitol Theatre on April 29 at 7 p.m. Following that, on May 6, The State Room will play host—which in itself is special for a venue that's remained very quiet throughout the pandemic—opening up their stage to duo Mary & Will at 7 p.m. Then it's grunge and blues-rock fusion Ark Animalz on May 12 at 7 p.m. on the Kilby Court stage, then jazzy soul-pop from Fonteyn on May 20 at 7 p.m., streamed from the Jeanne Wagner Theatre. For classical lovers, there's the Meadowlark String Band on May 27 at 6:30 p.m., out in the open streets at Exchange Place, followed on the same evening with sets by the Mel Soul at 7:30 p.m. and Branson Anderson at 8:30 p.m. This series is a collaboration involving Salt Lake Community College, The Blocks, S&S Presents, The State Room and KUAA, the latter of which will play the sets on the radio the following Thursday at noon at 9.99FM. Find the livestream links at SaltLakeArts.org/BrownBagConcertSeries.

Quarters Announces Re-Opening of DLC
A few months before the pandemic began, the nerdy-but-cool underground bar Quarters (which, for older Salt Lakers, is where the old Manhattan Club used to live) had started booking small shows in a little backroom, cordoned off from the rest of the noisy, neon-lit bar by a wall of dead pinball machines. Or so I remember. I stumbled into one show there before the pandemic began, at a time where it felt like more bars were starting to get into the "hosting live music" thing, a time-worn bar tradition that feels a bit absent from some of our popular downtown bars. But bars like Quarters were going ahead with plans to do music nights, with a whole part of the building dedicated to it—before the obvious happened. But hooray! They've just announced that they're starting to book shows for the space once again, as the prospect of going into a less-than-ideally ventilated bar space becomes more appealing and safer for more patrons. After a little test run of a show back in March, The DLC (what this acronym means is a mystery to me, but it's likely game- or nerd culture-related) is opening back up for real, and is looking to book shows. If you're a musician reading this and are interested in playing in a modest room underground in an arcade bar, inquire at thedlc@quartersslc.com. Shows will kick off in June, and will only take place on Thursdays and Sundays—no weekends, since weekends bring the zanies out. Follow @quartersdlc on Instagram or visit quartersslc.com for updates and news on shows. 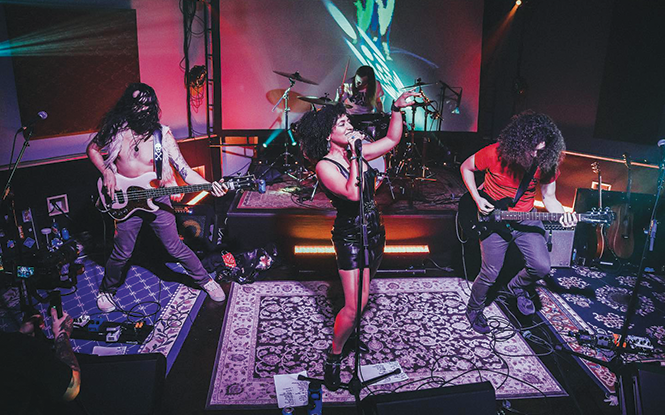 Bored? Head Down Beck Street
SLC's most bona fide biker bar has been keeping up with their musical goods throughout the pandemic, but now that it's safer for most all of us to go out again, you'd better swing by to catch their talent. The Garage on Beck barely discriminates against any kind of music, so a variety of Utah musicians have made appearances at the rough 'n' tumble spot on Salt Lake's most refinery-filled stretch of pavement. Shows can be found at the bar throughout the week, and there are a few notables on the horizon. On Friday, April 30, Spirit Machines visit, hopefully with some of the new tunes they've been alluding to on social media. The door cost for that show is $10, and the show starts late, at 9 p.m. Can't make it to that weekend kick-off? On the following night, Saturday, May 1, there'll be funk tunes from Clinton, Utah, by way of BBx, (8 p.m., $10). May 2 finds John Whipple—of bands like Tycoon Machete, which specializes in dark, psychedelic and vintage rock 'n' roll—stopping in (7 p.m., $7). After a few nights off, The Vitals kick things back up on May 7, with their particular brand of family-oriented pro-labor folk rock (9 p.m., $10). After that there's two longtime SLC staples: Hectic Hobo's gritty Wild West-meets-traditional-folk balladry on Saturday, May 8 (9 p.m., $10), and Nick Passey and the Perpetual Sadness on Sunday, May 9, who typically play so many shows around the state you've had to have heard of them by now (7 p.m., $7). Visit garageonbeck.com for more info.

Song of the Week, "Live 4ever" by Magdalena Bay
Who do you think of when you hear the words "vocal fry?" A character from 90210? Alicia Silverstone's Cher from Clueless? Or does Britney Spears immediately come to mind? It's the latter for me, and what I immediately thought of when hearing the song "Live 4ever" by contemporary pop duo Magdalena Bay. Lead singer Mica Tenenbaum channels the vocal-fried, sexy baby-speak that Spears made popular in pop in the '90s, and it's half the reason why this song is so fun to listen to. Magdalena Bay's releases over the years have shifted from breezy beach pop to glossier bops (the A Little Rhythm and a Wicket Feeling EP), but on their 2020 EP Mini Mix, Vol. 2, they shift gears into hyperpop territory, and it's good. The ultra-sultry opening track sounds thematically like one of Charli XCX's sexy, slightly high songs, and the shimmering, ethereal synths keep things soft even as they quickly explode into big atmospheric moments filled with bass thumps. But the best part of the song is Tenenbaum's delicate, fried vocals cooing, "Can we go faster? Let's go," before her infectious demand to "go, go, go" seduces and thrills, sending the song into warp speed. Ending abruptly with a nod to dubstep, the song feels sent from the same gods who gave us Britney, but with an ambitious, modern energy that goes far beyond any pop that came out of the 2000s. It's a treat, and you can stream it wherever you stream.