Sunfish Are Running for President
Not really, but that's the name of their new album, sort of. In an online announcement, they explain that Sunfish For President is a mixtape of everything they've done since their 2020 single "Whatever." Released April 2, many of the songs have already been out for a while, though there are some unfamiliar tracks among the lineup. A few months ago, for a show they played with Courtney Lane at Kilby Court, I described them as a rather undecided-sounding band, and that's still true, though that's not necessarily a bad thing. It is, however, pretty weird to see bonafide zoomers making music ranging from a '90s alt-rock style that feels like it'd be the soundtrack for a tweenage rom-com of the era (opener "Doors") to the glam rock-heavy riffs of hooky tracks like "New Mistake," to, somehow, ska! It's a novel mix, especially on "Insecurities" where squealing, heavy thrash riffs are a vehicle for vocalist Carter Sears to howl the lines, "insecurities! I hate the way that you speak to me!" On songs like "Whatever," which feels somehow central to the band's sound, they remind me of exactly one Dramarama song, "Anything, Anything," in that they enjoy the unhinged spiral of a guitar let-loose and hedonistic, impassioned lyrics written quickly. Things calm down on the mournful break-up track "The World's So Small," before picking back up into that ska-ish track I mentioned, "Bad," which features jazzy keys, swinging rhythms and a background chorus—early Panic! At the Disco—before those damned stadium riffs come back randomly to carry it out. Of all things, a piano track ends the album. It is unclear what the hell kind of band they think they are, or who their influences might be, but it's clear that they—as stated in "Whatever"—do whatever they want. Lucky for Sunfish, somehow, it works. Stream it on Spotify and follow them on Instagram at @sunfish.sunfish.sunfish.

SLAM Welcomes Back Summer Camps
With a year of safe, in-person COVID-safe instruction under their belt, Salt Lake Academy of Music is back for the summer and ready to rock, this time with summer camp. If the musical kid in your life is raring to get out this summer—after what was surely a strange pandemic year for both in-school and virtual-school kids alike—SLAM is offering numerous all-day camp options for SLC youth. SLAM offers multiple camps, focusing on genres ranging from rock and punk to bluegrass, folk and classical chamber music, with weeklong classes running for 15 weeks this summer between June and August. Each camp is performance-based and fast-paced over five days, Mondays through Fridays—the final day where students get to conclude the week of classes with a finale performance. Camps are offered for age groups between 7 and 12 and between 13 and 18. The in-person camps will take place at Parley's Creek in Hidden Hollow, across the street from SLAM headquarters. Early-bird pricing runs through April, with each class costing $300, and pricing shifts up to $400 after May. To find more info on SLAM and registration, visit slamslc.org/camps.

Kilby Records Discography Goes Online
The modest—yet famous—all-ages venue Kilby Court has played host to national acts before they got famous and has housed locals who would become staples of our own Salt Lake music scene. And during the span of 2007-2013, there existed Kilby Records, an off-shoot of Kilby Court that featured a catalog of SLC-made albums. The owners of Kilby Court, Will Sartain and Lance Saunders, hope to preserve the history fostered by the venue and the label by re-releasing many of Kilby Records albums digitally. They'll also feature albums by artists who weren't originally on Kilby Records, including Form of Rocket and their 2002 album Se Puede Despedir A Todos and 2003's Lumber, as well as The Devil Whale's Teeth and The Tremula's S/T. The label also hopes to help release upcoming local albums that feature bands that have been integral to Kilby's particular music scene. It is, after all, a venue that's fostered a lot of local music over the last 20-plus years, and a diverse set, too. Lately, it's been home to indie pop acts like The Backseat Lovers, who even have a song dedicated to the venue—or rather, the girls that it attracts—called "Kilby Girl," about a 19-year-old with a fake ID and a nose ring, who "tends to know things." Kilby Records has a playlist up on Spotify of some of their offerings so far, including music by SLC classics like Birthquake!, Palace of Buddies, Red Bennies, Sleepy Passenger, L'Anarchiste, Band of Annuals, Will Sartain himself, and many others. It'll be a trip back in time for some, that's for sure. Find it on Spotify by searching for "sandspresents."

DeJoria Center Announces Summer Concert Series
The best thing about summer, whether in a pandemic or coming out of one, is hanging out outside. Even more so when it's somewhere a little beyond your usual string of haunts. For those friends in Summit County and anywhere else remotely local, one of those novel summer spots can be at the DeJoria Center, who have just announced that they'll be hosting their Summer Concert Series again this year, with a lineup soon to come. Who doesn't love a trip up into the mountain towns? The modest Kamas venue is located on the High Star Ranch, offering ample space, an outdoor stage and a large grassy lawn perfect for the shows, which will hopefully make for safe and conscious concert-going this summer. For those in the valley looking for stay-cation spots, DeJoria Center has local hotel partners listed on their website so that, post show, you can linger and have a little drink at the State Road Tavern and not have to worry about driving back down the mountain and then the canyon in the dark. It's always good to find new ways to enjoy the wilderness up above the Salt Lake Valley while also avoiding the hubbub of Park City, and if the DeJoria Center is new to you, fix that this summer by visiting one of these free shows. Oh, doesn't that sound nice? A summer night in the mountains, with music, merriment and nary a thought of a pandemic. Keep eyes out for their summer lineup at dejoriacenter.com. 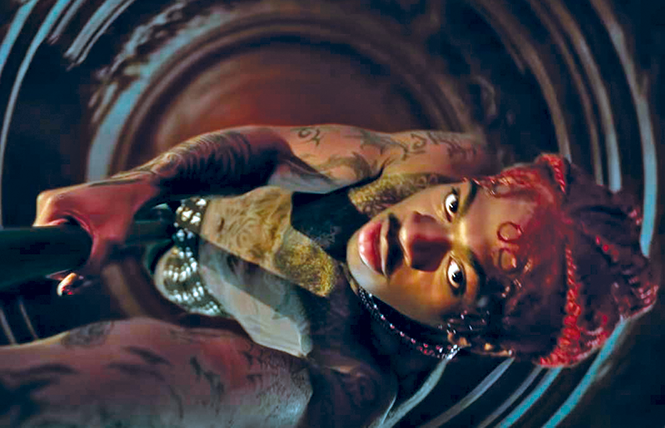 Song of the Week: "Montero (Call Me by Your Name)" by Lil Nas X
There's literally no other song to talk about this week than the latest thing to piss off American bigots, and it's the most recent in viral success by the one and only Lil Nas X. The 21-year-old artist has somehow thus far avoided one-hit-wonder status, which I think many expected for him after his first viral hit, the campy cowboy-themed "Old Town Road," became something of a meme. But it also sparked friction within a country music community that was disapproving of a young Black man mixing the deeply white genre with modern hip-hop motifs. While his record held the top spot on the Billboard Hot 100 list, he came out as gay, becoming the only artist to ever do so and spurring further friction in not only the country music community but in the rap community, too. But Lil Nas X took it all in stride, and now he's back with another big splash. "Montero (Call Me By Your Name)" is a simple song about heading over to your crush's house—it's really no more horny than much of the pop by straight artists we regularly consume—and references in its chorus the 2017 queer romance Call Me By Your Name. But it's the video that's got people in a tizzy. While the Internet at large has delighted in what is ultimately a rebuke of the "gays go to hell" narrative young people like Lil Nas X grew up on, good American Christians are pissed. Apparently even Satan is sacrosanct now, because they really hate to see Lil Nas X dolled up in black heeled boots and riding a pole from heaven to hell, where he gives Satan a lap dance and then snaps his neck to steal his horned crown. Talk about throwing it back in thy enemy's face. Stream it wherever you stream, watch the video on YouTube.