If you’ve never checked out Salt Lake City reggae acts Carlo Cornia and Soul Redemption or ska fiends 2 & 1/2 White Guys, tonight presents an opportunity to catch up—for a good cause. Last November, a local construction worker suffered a serious injury on the job that left him paralyzed from the chest down. His wife, an ER nurse, has been out of work since the accident, caring for her husband and their two children. For safety reasons, they’re keeping their names out of the press. Help them get their lives back on track, tonight. Elevate, 155 W. 200 South, 9 p.m. Info: 478-4310

MINISTRY
Arguably, Al Jourgensen can do whatever the hell he wants. He’s been setting and breaking his own rules for nearly three decades, reinventing the sound of his main gig
Ministry (while largely retaining the legendary group’s rapid-fire industrial underbelly) as well as several side projects including the lovely Revolting Cocks. After releasing Ministry’s last album of original material in 2007, the group delivered a nice April Fool’s Day surprise with Cover Up, featuring strange and nicely ear-splitting tributes to Rolling Stones, ZZ Top and Louis Armstrong, among others. Their version of The Doors’ “Roadhouse Blues” sounds like a big rig careening out of control, set ablaze with diesel fuel. It’s got to be a hurricane force live. Other monster forces on tap tonight: Tommy Victor (Prong), Sin Quirin (Revolting Cocks), John Bechdel (Fear Factor, False Icons), AAron Rossi (Prong/John 5) and Tony Campos (Static X). Special guests may or may not show up. Prepare to be blown away and—possibly—surprised. In the Venue, 579 W. 200 South, 6 p.m. All-ages. Tickets: SmithsTix.com

Is it better to burn out, fade away or star in a reality television nearly two decades after your heyday? Bret Michaels has a pretty good idea. Once recognized as the goldilocks heartthrob behind ’80s/’90s hair metal band Poison, Michaels has since attracted a new generation of fans who are more interested in which sleazy chick he’ll (temporarily) wind up with on VH1’s Rock of Love (see True TV) than in whether he can still pull off “Every Rose Has Its Thorn” (he can). Jest if you want, but the dude attracts quite a crowd. So do car accidents, but whatever. Indulge your nostalgic—or ironic—impulses Sunday. Club 90, 9065 S. 150 West, , Sunday, April 13, 9 p.m.

Monday 4.14
RJD2, DALEK
I only caught the tail-end of Dalek’s official South by Southwest showcase this year, but the New Jersey hip-hop duo left a lasting impression with just one “sick” song. That’s right. Sick. Not just sick, like cool—sick, like unsettling. Disturbing. Even emcee/co-producer Dalek (who started out as a solo act before recruiting co-producer Oktopus) likens their latest full-length release to a David Lynch film. Abandoned Language (Ipecac Recordings) is sinister and shocking, not so much in its lyrics, but in its grotesque samples and beats. Each electronic backdrop creeps up on the listener like an underworld thug lurking in the shadows of a damp back alley. Think Doomtree, Cannibal Ox, Mike Patton—Rated R bordering on NC-17 material. It’s not vulgar or explicit. It’s smart and deliciously wicked. Don’t miss headliner RJD2, the widely respected underground producer who is taking a break from his Lost, Wire and Prison Break consumption to unleash new material on followers who are as stuck on him as he is on Jimmy McNulty. The Urban Lounge, 241 S. 500 East, 10 p.m. Tickets: 24Tix.com 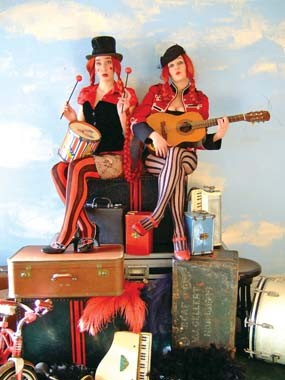 Wednesday 4.16
VERMILLION LIES
It’s hard to get a straight answer out of Vermillion Lies. Even when the Bay Area sister act (twins, born two days apart, if you believe them) delivers straight talk, it’s like the boy who cried wolf. But vague rumors and innuendo are all part of the duo’s mystique—and image is very important to understanding Lies. It’s not that their music doesn’t stand up on its own, but it’s much better to take in the whole package—to watch Zoe and Kim Boekbinder whip out wonders from their signature trunk (thus the title of their new album, What’s in the Box?) and play the (surprisingly melodic) barbeque grill with a sense of flirty whimsy or throw down an axe while one sister repeatedly asks, “Why do you fuck me up?” Their voices are sweet and their tongues are firmly planted in their cheeks. Global warming is “hot”—as is the solar system (“Your Milky Way is all over me”). Believe it or not, Vermillion Lies is like nothing you’ve seen or heard. Burt’s Tiki Lounge, 726 S. State, 10 p.m. Info: 521-0572 (with Juan Prophet Organization)