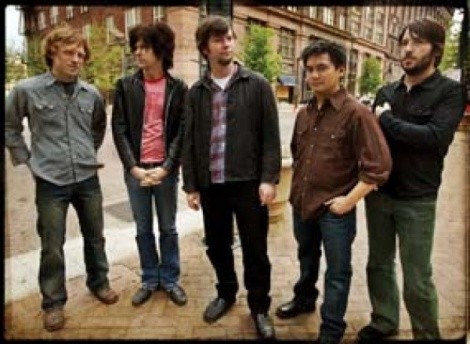 Friday 8.15
SON VOLT, BOBBY BARE JR.
When an awesome band splits, the original members can either 1. Stop while they’re ahead (Sleater-Kinney); 2. Stop, then reunite and release a mediocre album (The Stooges); 3. Spin off into one brilliant, if insane, group and one that’s “eh” (At the Drive In = The Mars Volta Sparta); 4. Spin off into two equally awesome, if quite different, new groups (Uncle Tupelo = Wilco Son Volt). It just so happens that Wilco and Son Volt are in town this week, but Wilco is sold out and Son Volt’s Salt Lake City stop is one of just four summer dates for the alt-country greats. Make it worth their while. The Paladium, 615 N. 400 West, 9 p.m. Tickets: SmithsTix.com

UTAH COUNTY SWILLERS CD RELEASE
We’ve heard it all before: Folks outside of Utah fancy us a state full of polygamists, backward-ass liquor laws—and not a damned thing else. Rather than roll their eyes and set the record straight, the Utah County Swillers take those cliché perceptions and play them up with hilarious, catchy results on Polygamist. The new root, toot and hollerin’ Big Bender release is nonstop rockabilly/trucker punk with grizzled vocals and lyrical content that swings from salty love songs (“It’s been all these years/and I must admit/I still think you’re the shit") to wayward trips down memory lane and cautionary tales of short-tempered friends. And, in keeping with their hard-drinking, redneck ways, Polygamist delivers just enough crass-as-hell ditties to maintain the group’s bad-boy reputation. You don’t need to be drunk to enjoy this bar band’s music—“but if you end up at Burt’s Tiki Lounge, you’re guaranteed a drink, a fight, or screw.” Not sure if that applies to other venues. Bar Deluxe, 666 S. State, 10 p.m. Info: 521-5255

Saturday 8.16
RICK DELLARATTA
Rick Dellaratta is more than just a piano man, though he tickles the ivories with flair and grace. An equal opportunity good Samaritan, the New York pianist, composer and vocalist is recognized around the world for his altruistic work with Jazz For Peace—a band he formed in 2002 to raise funds and awareness for worthwhile nonprofits and charities. Five years later, DellaRatta is fast becoming the Bono of jazz (minus the U2 frontman’s ever-present shades), with more than 350 benefit concerts under his belt. Tonight, Jazz For Peace takes the stage in honor of Habitat for Humanity (Weber and Davis Counties). Proceeds will go towards the completion of the Doxey Housing projects. Peery’s Egyptian Theatre, 2415 Washington Blvd., Ogden, 6 p.m. All-ages. Info: 801-395-3227

Wednesday 8.20
JOHN LAMONICA
John LaMonica is a musician of relative mystery—a man behind the curtain of his own indie accomplishments. He played in the Polyphonic Spree, a notable band of epic proportions where a single member can easily blend into the whole (they have their own version of Wikipedia—Pspree.Wikia.com—for gawdsakes), and released solo material as Buck Dexter, The Soundtrack Scene, Tek Tekniik and Tiebreaker, to consistently critical acclaim. And yet, he remains largely under wraps. Why? It could be that he’s more interested in sustaining a music career rather than hitting his 15 minutes of fame (which is more like five these days). Plus, he’s plenty busy—DJ-ing and doing live remixes every gallery stroll outside of Model Citizen and Disorderly House, working on mixtapes and a new 10-inch vinyl on Doll House Recordings, following by a full-length release. Get to know LaMonica tonight as part of the monthly Music @ Main series where he’ll create an “on-the-fly” performance with original sample-based drum patterns, keys, looped guitar and vocals. “It’s a challenge and creates what I believe is a truly personal “live” music experience,” he says. Main Library, 210 E. 400 South, 7 p.m. All-ages. Free. Info: 524-8200