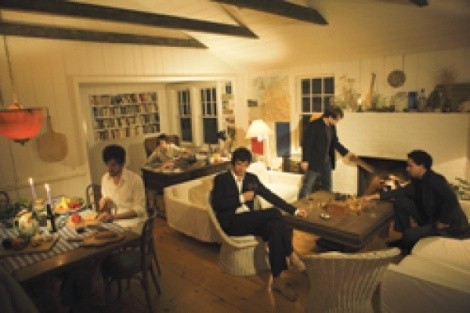 Thursday 8.23
CALEXICO, FRENCH KICKS
Following the 2005 release of Calexico/Iron & Wine’s quiet, but forceful, collaborative EP In the Reins, enamored listeners crossed their fingers for a second joint effort between the expansive Tucson collective and introspective folk artist Sam Beam. Instead, Calexico released Garden Ruin, whose slight departure from their signature Southwestern sound (read: less cinematic, more contained) confused and even angered a few diehard followers. But that’s Joey Burns & Co. for you—restless wanderers seeking new experiences at every turn, but always with great attention to the earth, the land, ancient cultures and giant horn sections. French Kicks can’t keep still, either. Besides touring constantly, the New York group likes to keep things interesting by swapping instruments and by dabbling first in sounds straight of the garage, then groovy Hall & Oates, rock, dance-pop and static-electric indie rock. Oh, this week’s is the last in what has been a tremendous 2007 Twilight Concert series. Get ye downtown, already! Gallivan Center, 239 S. Main, 7 p.m. All-ages. Free

DAN SARTAIN
There might be strength in numbers, but when Dan Sartain opened for the White Stripes this summer both groups proved that one or two members are really all you need to rock. Just don’t confuse Sartain for a sensitive singer-songwriter. An Alabama cowpunk with Jack Keroauc-meets-James Dean zest for life—and looks to match—he’s sure as heck a hopeless romantic, but he sports a stiff upper lip and strives for danger, twirling his rockabilly guitar with a sly devil grin. “I only fall for the girls that are going to break my heart,” he says on Join Dan Sartain’s “Totem Pole,” but rather than cry about hurt pride, he swears “It makes me want to kill, it makes me want to strangle.” Sartain reveals a softer side on his latest album, pleading for his girl to love him forever (“Besame Mucho”). But one line brings us back to Sartain’s Sisyphean dilemma: “Young girls are stupid and they’re cruel/ I still want them and what am I do?” The Urban Lounge, 241 S. 500 East, 10 p.m. Tickets: 24Tix.com (with Detroit Cobras)