Cinders Album Release at The Complex
Local band Cinders is back with their first album since 2018's Looking Forward to Looking Back, an indie-pop-rock effort that gave them a lot of popular fuel. Earlier this year, they began dropping singles once more, among them "Growing Up," "A Fix of Nostalgia," "Eyes Half Open" and "Rock Bottom." One of them, though, "Afternoon," came with a music video, and highlighted the struggle of life under COVID, a reality that influenced and affected the band and the writing of this new album, No One's Home. However, statements from the band about the album imply that while they may have been feeling and internalizing these sad times, that doesn't mean they can't still stick to their happy-go-lucky musical guns. Produced by the band and mixed by the Grammy award-winning engineer Phil Joly (of Daft Punk, Lana Del Rey and The Strokes fame), the album drops this Friday, Aug. 27. They'll celebrate the following night with an album release on Saturday, Aug. 28 at The Complex, in collaboration with X96. Support comes from fellow locals, the indie rock bands Squid Panic and With Andrea. This all-ages album release has doors at 7 p.m., tickets $16. Visit thecomplexslc.com for more info and to purchase tickets.

Not Your Mama's Backyard Drag
Who said that in order to see a glitzy and glam drag performance, you have to be a city-dweller? Heber City plays host to its very own drag event coming up on Saturday, Aug. 28 at the Five Penny Floral Studio. The event benefits the Heber City Encircle House, one of many locations around Utah where the youth-focused LGBTQ+ resource non-profit operates. Among the night's entertainment are local drag queens Darcy Willey, Ivory Larue, Rose Nylon and Ava Zawhore, and the real-deal performances that start at 8 p.m. will be preceded by a special pre-show at 7 p.m. Attendees can also enjoy dinner with their show, with local food truck Cucina Rustico Pizza on-site from 7 p.m. to 8:30 p.m. Tickets are $25, with all proceeds going to the Heber City Encircle House, where local queer youth can find a safe space to talk to peers, get accessible and free therapy, participate in daily programming and just drop in to be somewhere where they can just be themselves. As the drag artists performing at Not Your Mama's Backyard Drag show could probably attest, that kind of support in Utah communities is invaluable. Follow @rose.nylon on Instagram for more info on this event, and go to encircletogether.org for more info on Encircle.

Utah Arts Festival's Musical Offerings
August 2021 is festival season in SLC, pandemic or not. And now it's the Utah Arts Festival's turn this weekend. The fest highlights art of all kinds, from the crafty 'n scrappy to the fine and high, and they also make room for musical artists. This year's musical lineup is a wonderfully diverse local set, with something for everyone for the duration of the fest, which runs through Friday, Aug. 27 - Sunday, Aug. 29. Headliners include locals like Pixie and the Partygrass Boys and The Will Baxter Band, but there are also diverse touring acts, including The Nth Power, a funk and jazz trio loosely based out of New Orleans; Los Angeles-based Las Cafeteras and their fusion of spoken word, folk and Afro-Mexican music; and the Northern Idaho Americana of Jeff Crosby and the Refugees. Other notable acts on tap include Zac Ivie and Ocelot, a Pink Floyd Tribute show from The Great Gig, Brother., SuperBubble, Stop Karen, Jazzy Olivo and many, many more. Youth artistry will also appear by way of performances from Salt Lake Academy of Music, Random Acts of Symphony featuring The Utah Youth Orchestras & Ensembles, The Music and Art Collective and more. Tickets to the fest are $13 presale, $15 day of show; free for children under 12; $35 for three-day festival pass; $8 for seniors 65+ and military; and $2 for bike valet. Visit uaf.org for more info, full lineup, schedule and tickets. 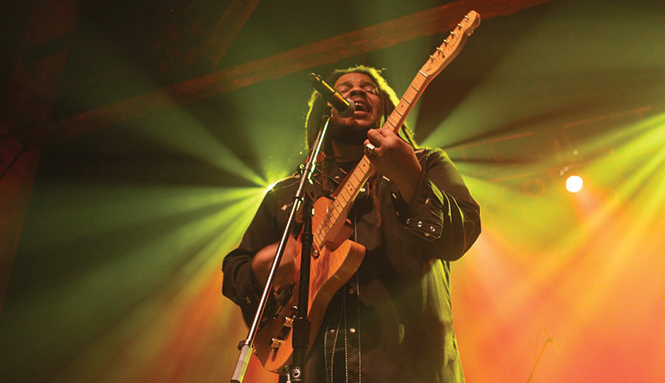 Stephen Marley at The Depot
While the world no longer has the most prominent member of the music-making Marley clan, Bob Marley's kids live on, and have made incredible reputations for themselves with their own work. Playing since he was a child with his siblings and mentored by his father, Stephen Marley is one of seven musical siblings who would keep up their work together in Ziggy Marley and The Melody Makers after their father's death. Stephen would also go on to become a talented and award-winning producer for brothers Damian and Julian Marley. After a life's career of producing and backing up the Melody Makers, Stephen made a name for himself with his first three solo albums, starting with 2007's Mind Control, 2008's acoustic version of that debut and the 2011's Revelation Pt. 1 - The Root of Life—all Grammy winners for Best Reggae Album. Clearly a reggae powerhouse in his own right, he's kept busy over the last few years with his 2016 album Revelation Pt. 2 - The Fruit of Life and singles featuring artists like Pitbull and Shaggy. Don't miss the momentous chance to catch the prolific reggae rocker on Tuesday, Aug. 31 at 7 p.m. Tickets are $30, and the show is 21+ at The Depot. Visit depotslc.com for tickets and more info.

ZHU at Salt Lake City Live
The Gateway has become many surprising things in recent years, as the sprawling mass of defunct-mall has yielded its commercial spaces one-by-one to new dining, bar and art experiences. Its transformation has also included the addition of musical offerings, most often at the stage by the Olympic Plaza. And thanks to Salt Lake City Live, the latest performance to grace the area will be ZHU on Friday, Aug. 27. The Grammy-nominated electronic dance artist will bring his classy, minimal take on contemporary EDM to the Olympic Plaza, a thus-far-unusual venue for such a bumping kind of set. But it's a refreshing pairing, and a great way for Salt Lakers to get out and enjoy the last of the warm August nights as summer flows into September. ZHU will be visiting with his new album, DREAMLAND 2021, in tow—a perfect chance for fans to hear the pandemic-inspired material IRL for the first time. While tickets at press time are $30 for GA and $75 for VIP, these tickets come with the promise of roughly five hours of entertainment, with the show starting at 5 p.m. and going until 10 p.m. While many of us would maybe never have imagined raving at The Gateway, never say never when it comes to this ever-changing space. Visit saltlakecitylive.net for tickets and more info.