Spend Winter with the Warrens, Hive Live Presents Skumbudz and Friends, Adam Fuller and Matthew Sommers Release By Your Side, and more. 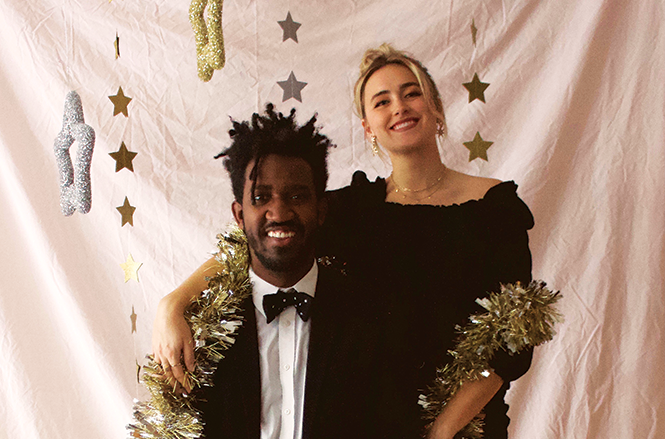 Spend Winter with the Warrens
Earlier this year it was Jay Warren's sincerest goal to be the first Utah artist to reach No. 1 on the iTunes R&B charts with his 2020 album, Give Love. Turns out he did just that upon the album's September release, but he's stayed busy since then. On top of releasing music videos for singles like "Dangerous Thing," now the local R&B crooner is inviting fans to enjoy Winter with the Warrens. A family affair of easygoing Christmas songs, it's definitely a well-deserved, indulgent break for Warren, who's hustled on his original releases throughout the pandemic. It's also a glimpse at the musical talents of Warren's other half—his wife, Annie Warren. The EP is not the first time Warren has collaborated with his wife, since the two share a podcast, The Internet's Mom and Dad, where the parents of two discuss all things domestic bliss and otherwise. So, leaning into the most wholesome of holidays together for this release is a logical next step, and a welcome one for fans of both Christmas music and Warren's signature smooth musical stylings. Warren's familiar, soulful voice is contrasted by Annie Warren's high and sweet contributions on the opening track "Baby It's Cold Outside"—which the marrieds do easy justice to—and on their popified take on "White Christmas." Bossa nova guitar parts shed some warmth on "The Christmas Song," which features fellow local musician and frequent Warren collaborator Nait Waite. Among all these familiar Christmas tracks, with their catchiness and modern pop ring (including the closer "I'll Be Home for Christmas"), Warren mixes it up with a honeyed take on "Ave Maria," which is the EP's anchor to the religious spirit of Christmas. So, whether you just want some new Christmas songs to soundtrack your holiday activities, or a sense of the Warren family's warmth and company, give Winter with the Warrens a listen. Find all streaming and purchasing links at jywrrn.com/music.

Hive Live Presents Skumbudz and Friends
Hive Live is back again this week with sponsorship from City Weekly, and this time around the locals under the spotlight for this post-Christmas show on Dec. 26 are some folks we've profiled in the past. Last year, we caught up with the trio of reggae rockers that are Skumbudz, who are bonded over their love of all things snow, skate and a certain kind of scum that can easily be guessed at by their name. Their 2019 album Valley Vibes is full of references to their favorite substance, but also filled to the brim with their fusion of psychedelia, rock, hip hop and, of course, reggae. They'll be joined by like-minded folks inclujding Braden Lee Waiters, a funk and blues aficionado in the vein of Gary Clark Jr., who returns to SLC after sojourning to L.A. to make music there. He'll do so on the tail of his 2020 release Deep Blues, which came out just last month. It's a shame he left SLC, because the brand of out-of-this-world funk rock he's got on display isn't commonly heard here. Rounding it out will be The Fervors, who also deal in all things psychedelic, and who have been playing outdoor and socially-distanced shows these past few months. Like the Hive Live event before it, this night will find Soundwell operating at limited capacity, and tickets must be sold in groupings of at least two and no more than six. Groups will be seated six feet apart, social distancing outside those groups is required, and so are masks when guests aren't eating or drinking. Doors are at 6:30, and tickets for the event are only $10. If you need a pick me up after Christmas (sometimes it's not all merry and bright!), this just might be the show for you. Visit soundwell.com for more details and tickets.

Adam Fuller and Matthew Sommers Release By Your Side
The title track that introduces By Your Side—the new collaborative album by Adam Fuller and Matthew Sommers—is a warm, heart-tugging piano tune that stands alone among the rest of the album, while also opening up the ears for the sunny instrumentals that follow. Released Dec. 9 of this year, By Your Side was recorded roughly a year ago in November 2019 before COVID stopped the SLC-based Fuller and L.A.-based Sommers from being able to connect. The seven-song album is an experiment in the genre of vibes, contributing to the realm of 'lofi hip hop beats to relax/study to" with upbeat fusions of jazz and funk house. While Sommers also released the more acoustic-leaning but sonically similar Sanctuary this year, By Your Side's freeform fluctuations provides a chance for Fuller to shine away from his usual place in the lineup of local pop boy band Ivouries (whose single "Take Back" is listed in this week's feature story on best local singles of the year). Sommers and Fuller met while both attending the U, and there Fuller also picked up a jazz degree. That background is only too evident on tracks like "These Loops," where he contributes sharp and airy keys that dance among the shifting, saccharine beats. Along with the jazz influence, there are snappy, jungle drums that grab one's attention on "Gotanda," and elsewhere club beats become dreamy recollections of the past. A version of disco comes out to play on the spare, spiraling track "Happy Accident," which is 6 minutes and 30 seconds of repetitious funk riffs perfect for a spell of trancelike dancing. On the closer "Without You," the up-tempo new millennium is called up again with the help of Fuller's gleaming keys. A fine example of the skills and promise of both collaborators, this perfectly-trimmed work is one sure to perk up your ears next time easy listening is sought. The album can be streamed on Spotify, and bought at matthew-sommers.com, with all profits going to The Trevor Project, a non-profit organization that provides crisis intervention services to LGBTQ youth.

Braden Lee Waiters Has the Deep Blues
Speaking of Hive Live and Braden Lee Waiters' appearance there, the Utah native will be performing in the wake of his debut album, Deep Blues, released Nov. 13. It's a short album at only seven tracks, but startles throughout as it outlines Waiters's ambitious debts to blues, funk, soul and psychedelic rock. "Green Pig'' opens the album with attitude, thanks to the steamy, traditional blues rhythms and gritty features from G. Love and Special Sauce. And though the rest of the album does not follow the same blues-driven path, it's a strong opener for an album that sees no limits. From there, Waiters travels far, skipping right over to funk and psychedelia on the catchy, punchy "Purple Ink" with its '70s hues and compelling groovability. The vintage tributes don't stop there, but shift again when "Everything You Dreamed Of" highlights Walters's ability to croon, which he does well alongside a feature from Kat Hall. Beyond those three distinctive opening tracks, the middle of the album returns to the jammy psych rock previewed on "Purple Ink," with an emphasis on the "jam" on the single "Think About It." However, the track "War," which tries to be a rallying cry of sorts, falls a little flat—the guitars wail sparingly, the drums sound a little lonely—which is a shame for a song that one can tell might be strong when played live. "War" is redeemed, though, by the much stronger subsequent beat-driven track "Still Want More," which serves as the starkest departure from the general vintage feel of Deep Blues, referencing the rap tradition of longing for the bag. Following that, "Mushroom Cloud" is the apt closer as a return to Waiters's rock 'n' roll strength, with guitar parts that wind up and spring back with verve while Waiters's vocals convey all the ease and confidence needed to really close out an album as ambitious and strange as this one. While rock 'n' roll with heavy '70s aesthetics like this can often feel played out, Waiters is doing something notable here. Listen for yourself wherever you stream, or pick up a hard copy at bradenleewaiters.com

The Aces Release Video for 801
This year found many musicians operating in different ways and places than they were used to, but for the Provo-native four-piece The Aces, that meant coming back home. Or at least, it meant that for half of the powerhouse quartet, who found themselves split between their native Utah and Los Angeles through the summer release of their second full-length album Under My Influence. Despite relocating to L.A. as many in the pop world do in order to make it, The Aces are still very much focused on the influence that growing up in Utah has had on their lives, and in particular their senses of being "black sheep" as a group that's three-fourths queer and grew out of the conservative Provo scene. They return to their erstwhile home in the video for Under My Influence's song "801," which finds them dressed as outsiders indeed—a leather-clad bike gang of ski-masked Aces cruising the streets and alleys of SLC. "801" sways with reggae rhythms, while frontwoman Cristal Ramirez wryly sings about the oh-so-Utah experience of growing up different here, doing things like going to the club, dancing with girls and smoking j's. "Leave your church shoes and your Sunday clothes," she implores, "But bring your guilt and we gon' let it go." Many people in the Utah counterculture lean into the edgy anti-Mormon thing, but it's rather rare to see artists like The Aces also doing so, despite having made it as rising pop stars in their own right, far outside of the Utah scene. The video concludes with their lighting the 801 up, literally, by setting the ground on fire in the shape of the area code. While it could be read that they're burning their hometown down, it feels more like a tribute to surviving the place, its limitations and judgements—more like burning down 801 expectations. Stream the video on The Aces' YouTube channel.