Octave Willis Slow-Releases ain't it gr8, TSR Merch for the Holidays, Get in the Spirit with the Mouseketeers, and more.

Octave Willis Slow-Releases ain't it gr8
The first song on local beat experimentalist Octave Willis's new album is called "reaching," a lightly ethereal opener to the soothing, slightly funky collection of songs that make up ain't it gr8. Those who are familiar with Willis's work will already know that he's a member of the diverse set of synth and beat makers in SLC; back in March, City Weekly wrote about his more hi-fidelity release Agora. This time around, though, Willis presents a work that is softer around the edges, an altogether pleasant listen that feels warm to one's ears during this turbulent season of 'rona spikes, election disputes and unique holiday stress. As an opener, "reaching" shies away from the winking lo-fi vibes found elsewhere on the album, almost carrying the calm of a holiday song, though of course it isn't one. The song is filled out by what sounds like woodwind or brass instrumentation, soaring like a golden herald of some kind, or the sun on a brisk winter day. With the more down-to-earth beats on the rest of the album in mind, "reaching" almost seems like it's signaling a celebration of the easygoing, of the simple. "cruuuuzzin' at 118 mph," for example, is actually quite the slow song, hazy like a feel-good daydream. ain't it gr8 was also released over a slow amount of time, with multiple songs—most of the album, in fact—drip-released over several weeks leading up to the special early release on the last Bandcamp day of the year (Friday, Dec. 4). Also up for purchase is the hard copy, ain't it gr8 on a beat tape—a gift well worth considering for the electronic music lovers in your life, or for the cassette collectors. Whether you get it on Bandcamp (octavewillis.bandcamp.com) or stream it in two weeks when it hits Spotify, this is a sure pick-me-up of an album for the gloomy winter months ahead.

TSR Merch for the Holidays
The State Room has been just one of the many local venues affected by the pandemic, and one of the few locally not to attempt re-opening—a sacrifice and judgment call that is noble as hell, given that the logistics of hosting indoor shows during a pandemic are still dangerous no matter how many social distancing policies one puts in place. To make up for lost revenue and keep floating on until the pandemic lifts (maybe fall 2021 if vaccines come through?), they've come up with a few nifty ways over the last few months to create revenue. In the spring, it was an auction of their archive of posters from bygone shows. Now, just in time for the holidays, they've got stylish TSR-themed gifts for you and yours. TSR's new online store is full of hoodies, tees, stickers, magnets, mugs and even koozies (perfect for pairing with RoHa Brewing's special TSR Brew) for The State Room fan in your life who probably not only misses shows, but hopes to see the rebirth of them sometime in the next year at one of SLC's most beloved venues. And on top of that, thanks to the Shop in Utah Grant that's been given to many local businesses just when they need it most, The State Room is also selling Merch Cards at double value for a limited time. All of the items in the store are available for pre-order only, with up to a three week's wait on some, so get over to that merch store (the-state-room.square.site) right now and send your orders in to get the goods before the holidays arrive.

Get in the Spirit with the Mouseketeers
It should surprise no one that Utah, as something of a pop-making super-realm, also has roots in the pop-making super-realm that is Disney. Many of today's biggest pop stars—like Justin Timberlake, Britney Spears and Christina Aguilera—all started out in the junior singing group the Mouseketeers, part of a 1990s Disney revival of The Mickey Mouse Club, which was chock-full of many other musically talented youths. Among them was Jason Blain Carson—known variously over the years as Jason Carson and Blain Carson—who is the Mouseketeers' Utah connection as a Salt Lake City native. After his two seasons with The Mickey Mouse Club as a youth, he grew up to front the country band Shiloh, and later joined up with his wife to perform as the duo The Carsons. As of this holiday season, Carson and his fellow Mouseketeers of yesteryear have teamed up once more to create an album full of their unique renditions of classic Christmas songs, and the explanation is in the name: Why? Because It's Christmas. Among those Mouseketeers are Tony Lucca (now of The Voice fame) and Rhona Bennett (now part of the R&B group En Vogue), with Lucca and Carson teamed up for a bluesy, almost-jazzy take on "God Rest Ye Merry, Gentlemen." A portion of the proceeds from this Christmas album goes towards those extremely affected by COVID-19, through the non-profits Cast Member Pantry, MusiCares and The Brave of Heart Fund. Cast Member Pantry specifically benefits those Disney Parks employees affected by the mass layoffs enacted by Disney—making this tribute from the former Mouseketeers a rather meaningful one. Stream it on all streaming platforms to get into the holiday spirit, or purchase the commemorative CD at MMCHolidays.com 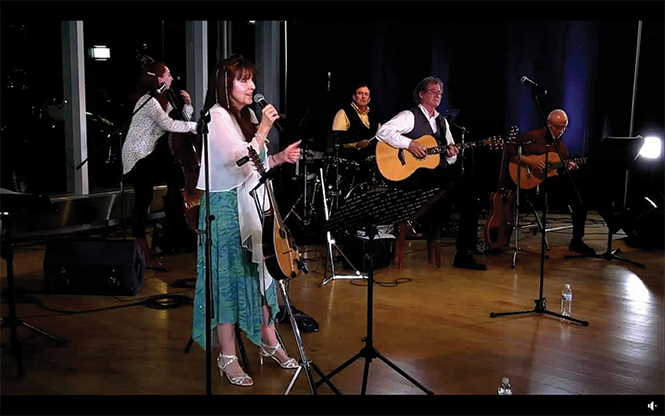 Excellence in the Community Presents Lark & Spur
One of Utah's longest-running musical groups, Lark & Spur has been churning out their jazzy, folksy, spirited takes on classic tracks since the 1970s—and not just locally, but with tours all over the nation and world. Core members Jeff Whitely (guitar) and Lori Decker (mandolin and vocals) have filled out their live performances in the past with woodwinds, bass, guitar, piano, accordion and drums played by a dependable band. Though Lark & Spur has two whole Christmas-themed albums under their shared musical belt (2009's Star of Wonder, Star of Light and 1995's Season of Light), they've often through their long career drawn upon Irish and English heritage via songs from the Middle Ages, old Celtic tunes. But they've also swerved into more modern forms via experimentations in Bossa nova, jazz, swing and Broadway. Those inclinations come out on their other 2009 album, Once In France, a title which perhaps references their years spent on and off touring Europe, where they had much success, from busking the streets to playing big jazz festivals. At home, they've found popularity over the years performing around Salt Lake City and Park City, including with the Utah Symphony. With all that background in mind, let's get back to what's relevant for this time of year: the Lark & Spur Christmas Concert, put on by Excellence in the Community and live streamed from The Grand Theatre at Salt Lake Community College. The group brings grace to all the most classic Christmas songs, maybe even enough so that folks who "hate" Christmas music could be won over to the genre's status as a true classic, just as evergreen as Lark & Spur have been and remain. Visit facebook.com/excellenceinthecommunity for the event page and stream on Tuesday, Dec. 8 at 8 p.m.

Mundi Project's Online Meet n' Greet
Among Salt Lake City's programs for kids with musical inclinations is Mundi Project, an organization that not only specializes in giving young ones music education, but in opening doors even to those who might not otherwise have the opportunity available to them—battling the barriers faced by kids from all socio-economic backgrounds. It may seem hard to acquaint oneself with new things, but if Mundi is new to you and yours, there's still a way to get to know the faces and talents behind the non-profit, specifically this Saturday, Dec. 5, when Mundi opens its virtual doors for an open-house via Zoom. The ever-handy pandemic platform will host a safe meet-and-greet with Mundi staff, students, teachers and board members for a night of fun and learning, including live performances and prize raffles, featuring both family fun and more adult-friendly prizes. The online event is open to all, and to all kinds of questions about Mundi and its goals of accessibility and learning for all, from 12 p.m. to 1 p.m. It's not just an afternoon shindig for adults to pop in to, but one that kids will enjoy too if they've got a favorite crazy Christmas sweater to don, which is a suggested dress code for those who join the meeting. For anyone unfamiliar with Zoom, anyone with the room passcode can participate, so don't miss the chance to tune in and get your questions answered if you've got a young'un jonesing to learn an instrument, any instrument! Visit mundiproject.org or facebook.com/mundiproject for more info on how to attend via Zoom.