Slamdance Films for the Musically-Minded
In case Sundance season came and went too quickly—or perhaps just passed you right by, by virtue of it being online this year, providing none of its usual clot of tourism to remind Utahns to get tickets—Slamdance is right on its heels, also virtually this year. The oddball answer to Sundance's austere take on indie returns for its 26th year as a festival for emerging artists, and with options for movie-lovers of all kinds. If it's music-focused stuff you prefer, there are a few great entries to catch. Those going in for the long shows shouldn't miss the documentary feature Bleeding Audio, directed by Chelsea Christer, which focuses on both the stunted climb to fame by the early aughts band The Matches, and the social/economic changes felt in the music world at large as the Internet took a toll that's still evolving today. If it's narratives you favor, Claes Nordwall's Autoscopy follows a young man who escapes into the Swedish wilderness, only to make strange discoveries both around him and within himself, facilitated by psilocybin mushrooms (magic mushrooms for those less science-savvy) and soundtracked by drone artist Evan Caminiti, formerly of the duo Barn Owl. Anyone who knows mushrooms or drone music can likely be ensured a trippy ride with this one—but perhaps also a soothing and even revelatory one. There is also a huge selection of films with focuses on disability, or at least just the exposure to stories featuring disability that is deserved in a world full of actual disabled people. A$$ Level, directed by Alison Becker, is a music video that playfully references the color and life of '90s music videos, but with an emphasis on "living the best life—in a wheel chair." Slamdance is just one of seven festivals that the video—produced by a majority female-identifying cast and crew—has been welcomed into with open arms. The joie de vivre of this disability-focused video is met with the flip-side of what disability can often mean for women with I Wish I Never, by Shaina Ghuraya, a music video that explores the crushing statistic that around 40% of women with disabilities experience abuse. Browse these and the many other films on offer over at slamdance.com. The festival starts Friday, Feb. 12, and runs through Feb. 25. All-access tickets are a whopping $10, so don't miss it.

Valentine's Day at DuVin Pintor
What goes together more classically than wine and nodding at art in a dim room? There may be an answer out there, but it doesn't serve the purposes here, or of DuVin Pintor. The Texas-based company recently opened their SLC venture, another one of their wine-fanatic and art-gallery fusion spaces. They're meant for both fostering access to diverse collections of fine art, and offering opportunities to engage in and learn more about wine. After a soft opening in October 2020, the space is now opening its rooms to more than just visual art, by hosting weekly music nights, too. Every Wednesday night is now home to music to accompany all the art and wine, brought to attendees by enigmatic artist Motto. The vibe will shift from week to week and from genre to genre, depending on the mood of the evening. These nights start at 8 p.m. and cost $25 for access to wine, food and beer; table reservations are highly recommended since, as all businesses are right now, DuVin Pintor is heeding COVID risk by offering a limited amount of space each night. In addition to this new development for SLC's latest nightspot, they've got good Valentine's Day options for folks too—which calls to mind the fact that Valentine's Day and wine might be an even better pairing than wine and nodding at art. On Saturday, Feb. 13—Valentine's Day eve—they've got an evening of eats and jazz to join their libations, provided by Barrio SLC for the former and Kimberly "Kaz" Woods and The Jazz Vespers Quartet for the latter. That 5:30 p.m. early show yields at 9:30 p.m. to La Conga Social for rounds of salsa and bachata dancing. So whether you want the Wednesday beats or the Friday dancing, visit DuVin Pintor on Instagram at @duvinpintorslc or at duvinpintorglobal.com and get your RSVP on. 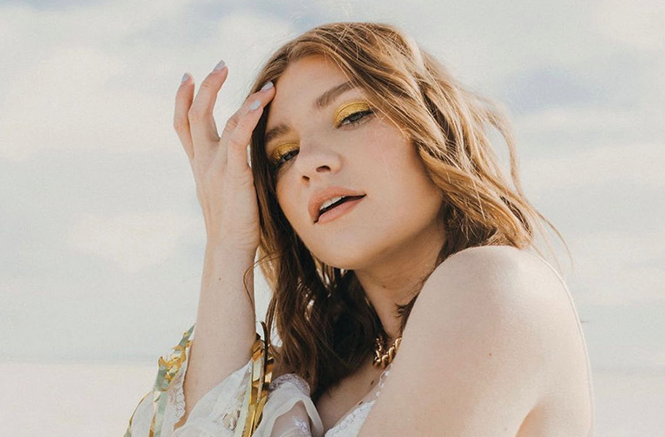 Sophie Blair's New Release and Kilby Date
On the heels of her 2020 debut EP Arteries, Sophie Blair is back as promised by her new label Wonderwild Records (a new label on the local scene that City Weekly profiled a few weeks ago). This month, it's with a single off of her upcoming EP Flatline—which is tentatively scheduled for a June 25 release. In the vein of singles like "Don't Be Like That!" off of Arteries, her latest single "Are You Thinking About Me??" has all the same flushed energy—of a big crush, of breathless hope and endless spirals of fixated affection. It's almost like an answer to her other romance-fueled singles, but Blair feels like she's more in control here; instead of imploring her crush to behave differently, she's all in her feelings and flirting when she asks if they're just as enthralled as she is. Her breathless delivery sounds more confident, and when she sings lines like "you make my heart half-break, I'm blue in the face," it sounds almost like a love song to her own music. The song is otherwise filled out by electrified strings and groovy, colorful slap bass that bring a new dimension to Blair's quickly evolving brand of youthful pop. Fans of the artist have time to acquaint themselves with the track—which released on Feb. 5—before Blair visits Kilby Court on Feb. 20 with opener Sean Mena. It will mark not just a rare pandemic performance for Blair—who hasn't had much opportunity to play her new music live since it all released—but in fact her first performance in a whole year. Meanwhile, Sean Mena will join her for a solo set that's rare for him, too, but because usually he's playing with his band, the locals Kipper Snack. This all-ages show is $15 and starts at 6 p.m., and as always these days, requires attendees and performers to wear masks while at the venue, as well as that everyone maintain social distancing. These capacity-capped shows sell out fast at the small venue, so consider this your advance notice! Visit kilbycourt.com for tickets and more info.

Tony Holiday Embarks on Mini Soul Service Tour
For an artist who released an album in the spring of 2020, chaotic as that time was, local Tony Holiday has still been pretty damn busy spreading the good word of that album, Sunday Service. A triumphant rock 'n' roll blues effort for a veteran of the genre, Sunday Service has certainly made its way out into the world with aplomb—Holiday managed to score a #9 spot on the Billboard blues charts with it, scored a #1 most-played international release on the Australian Blues & Roots Airplay Chart and cracked the top 15 of the Living Blues charts, too. On top of that, he's spent some time wandering, spending time in Mississippi this summer, and more recently, producing an album in Nashville for the similarly-aligned local J-Rad Cooley. Soon, he'll be on the move between Memphis and Arizona for a small tour of sorts (a foreign concept these days), and he of course will be including an SLC stop in there, on Feb. 17. Though the artist has stayed busy with online streams like his Porch Sessions series and with outdoor shows, this is one rare opportunity to catch Holiday at a local venue in support of Soul Service. Locals in the blues scene are sure to snatch up the limited tickets, fast. Holiday will also be joined by a few other staples of the Americana community by way of Michelle Moonshine and Andrew Wiscombe, performing as their duo project Turtledovin', so there's all the more reason to head over to soundwellslc.com to grab yourself a pair of tickets. Tickets sell in pairs or groups of up to six. This 21+ show has doors at 7:30 p.m., masks are to be worn at all times except for when actively eating or drinking, and the venue will have a capacity limit and socially-distanced seating for each group. Tickets are $15. In the meantime, stream Soul Service wherever you stream, and follow Holiday on Instagram at @tonyholidaymusic for more updates on his busy, bluesy life.

Song of the Week, "It's Okay to Cry" by SOPHIE
As if things couldn't get more heart-wrenching in this world, the future of music just got a lot duller with the loss of one of the most prolific modern producers last month. On Jan. 30, Scottish producer and pop star in her own right SOPHIE died in an accidental fall while climbing up to see the moon in Athens, Greece. If you're familiar with her music, you know how poetic that reads, but it's a poetry hard to focus on in light of the tragedy of it. Making a name for herself by producing boundary-pushing electronic music for pop stars of the highest sets and the underground alike, SOPHIE started releasing music under her own name just a few years ago. That independent effort culminated in 2015's PRODUCT and 2018's widely celebrated OIL OF EVERY PEARL'S UN-INSIDES, on which the 2017 single "It's Okay To Cry" resides. That's my song of the week, and while it's obviously appropriate for the loss of truly one of the most innovative and indisputably unmatched music makers out there, it's also a remarkable song because it departs from most of SOPHIE's other famed work—from her albums or for others, like the hyperpop work she all but established for artists like Charli XCX and PC Music. While OIL OF EVERY PEARL'S UN-INSIDES is a riot of industrial sound, SOPHIE's synthesizers clanging over one another with both precision and abandon, "It's Okay To Cry" is soft, heaven-sent. A twinkling piano line leads up to ethereal, drawn-out synths that trade her usual staggering drops for tender slowness, and gentle whispers that "it's okay to cry," a sentiment that carries the song to heights that feel both spiritual and deeply intimate. An artist who resonated with fans for both her musical savvy and also for her being one of the most successful trans artists of her generation, her loss will be felt forever—but as she's already established, it's okay to cry. Stream the song wherever you stream.