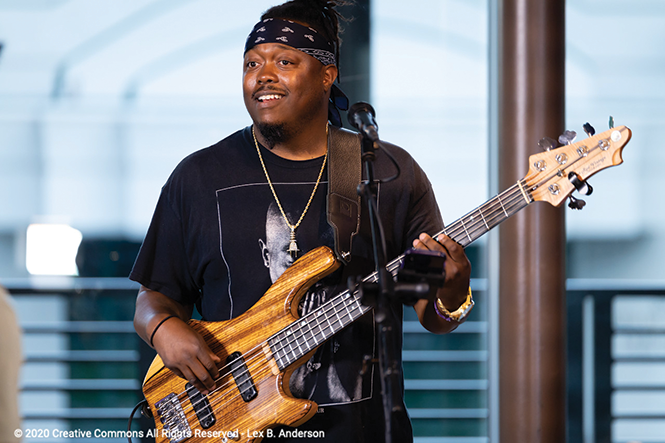 Excellence Concert Series Welcomes CJ Drisdom
If you've got the double-mask blues, and are still looking for a way to safely find some entertainment this weekend while also celebrating Black History Month, Excellence in the Community has got you covered. Throughout the pandemic, the locals-focused community music event has adapted what were once live, in-person performances for the Gallivan Center Stage to a live-streamed event series instead, which takes place at the Gallivan Center. Each concert is free, and this month, the emphasis of each show has been on some of Utah's notable Black performers, including Bri Ray and the Junction City Blues Band. To finish the month off, one more performance is still to come, this time by CJ Drisdom, on Saturday, Feb. 27 at 8 p.m. Drisdom has performed for the Excellence series in the past, for another live-streamed event playing as CJ Drisdom and the Feel Goodz, a group which also featured Utah's rising pop star Jay Warren. This time, though, Drisdom will be solo, showing off musical chops that he's honed over the 15 years he's spent working as a professional musician—mainly with the shifting talents of the entertainment group he runs and is part of, Changing Lanes. The group is the perfect home for Drisdom, who knows his way around all musical genres thanks to his studies in Vocal Performance at California State University-Long Beach. Usually strapped to a guitar on stage, he knows his way around any kind of song an audience could want to hear, and that talent has earned him much local acclaim, as well as a lot of business all over North America. While watching shows virtually may still feel a little strange for some, it's truly wild that we have the opportunity to view such talented individuals in the SLC music scene for free, and from the comfort of our own homes. If this sounds like the right way to spend your Saturday night, visit facebook.com/watch/excellenceinthecommunity for the events page where the set will stream, and where you can also retroactively view the month's sets by Bri Ray, Junction City Blues Band and Harry Lee & The Back Alley Blues Band.

Live-Stream with Living Jazz
Another good way to acknowledge Black History Month as February comes to a close is by sitting in on a live-stream that's all about jazz. The Oakland, Calif.-based organization Living Jazz has been a champion of all jazz-related things since the 1980s, when they began fusing the love of jazz and its history with love of their community, subsequently fostering many enduring musical and social programs in the Bay Area. While Living Jazz is not local to Utah, of course, our state has a thriving jazz scene of its own, especially in the communities around Ogden, home to its own traditions like the Jazz at the Station annual series. So, our community will certainly find some interest in their live-stream series Call & Response, which features intimate conversations with all sorts of jazz icons. The upcoming episode—which streams for free on livingjazz.org—features conversations about "the role of the artist as catalyst," and centers on Christian McBride, a jazz man of almost too many talents to list. Equal parts musician, educator and radio host, McBride is a talented bassist, composer and arranger who has won six Grammys, and worked with jazz musicians like Herbie Hancock, the recently-departed Chick Corea, Diana Krall plus many others, and has also dabbled in the worlds of pop, hip-hop, soul and classical. He now finds a home on radio, hosting and producing jazz-centric radio shows like SiriusXM's The Lowdown: Conversations With Christian and NPR's Jazz Night in America. Besides his musical experiences, his familiarity talking about jazz makes him perfect for ruminating on the question: What is the role of the artist as catalyst? He'll be joined by Andre Kimo Stone Guess, who will be moderating the conversation, and who in the past served as CEO of the August Wilson Center for African American Culture in Pittsburgh, as well as the Vice President and producer for Jazz at the Lincoln Center in New York. If there's any doubt that these two bring authority to the subject of jazz, its history and the way it changes the world around it, there shouldn't be. Jazz lovers are well-advised to tune into livingjazz.org for this and whatever follows in the Call & Response series. The show airs Sunday, Feb. 28 at 5 p.m.

KPCW's Winter Pledge Event
It's that time of year at KPCW, so listen up, Park City readers especially—it's time to give back to one of Utah's ever-valuable community radio stations. Like the SLC-based KRCL, KPCW is a free, local non-profit radio station that focuses on giving its listeners in Summit and Wasatch counties access to free local news, NPR programs and of course, "mountain sound" tunes to listen to on the road or online. But just like any non-profit in the radio business, they need sustenance from the people who use their services all year round! So if you're reading this and you rely on KPCW for any of these things, don't flip the station when they start their Winter Pledge Drive on March 1, a fundraising push that will run through March 4. Donate ahead of time by calling in to 435-649-9004 or visiting kpcw.org. Because of COVID, donors can't look forward to the same range of promised prizes for signing up to be a sustainer, but they can still look forward to a number of COVID-safe, mailed-out gift cards once everything is said and done—and these include cards to local cafes, bars, restaurants, small businesses, parks and museums, even a resort for the big spenders. Also featured are words from other local non-profits in the area, with lots of focus on orgs doing good in the social, arts and of course, outdoors and snow-centered sectors. All of this contributes to what KPCW sees as a unique fund drive, unlike others in that they have a lot of fun goofing off with their guests on-air, and letting the listeners in on the fun while they do. If you love KPCW, whether for their savvy on all things resort-related, their access to wider national news or their open-to-submissions Fresh Tracks Fridays, don't miss the Winter Pledge Drive, starting on Monday, March 1. Support local, and listen at 91.7FM, 91.8FM, 88.1FM or at kpcw.org. 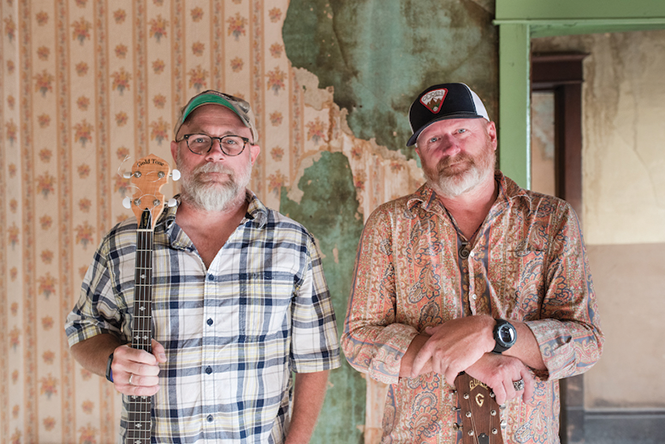 The Proper Way Releases EP It's All In Your Head
The streaming world has changed a lot about the way we listen to music, but it's changed the way artists release music, too. And when it comes to trying to game the streaming system, even locals like The Proper Way are trying to do it the right way. Hence, their two-part EP release schedule, which began in 2019 with the release of Beautiful Melodies. Terrible Things and now concludes with the other half of the songs, released as It's All In Your Head, which drops on Feb. 26. The move was inspired by the realization that albums just don't get streamed in full these days as frequently as shorter releases. It's All In Your Head also departs from recent work by The Proper Way by blasting to the past—the EP is made up of many songs written only by Scott Rogers and Shane Osguthorpe many years ago, before they were joined by third member Carrie Myers, who has been incredibly influential on the band's sound since. While the band describes the 2019 EP as gloomier, It's All In Your Head at least sounds about as low-down, even though it isn't thematically. For example, "Hittin' My Stride" is a low and slow piano-assisted track that sounds sad, even though it really finds the 51-year old Osguthorpe pushing back against the idea that musicians need to follow a certain trajectory, one tied to youth. It's also the only song that actually came out of the past year, the only pandemic-written track. "Wanna Go My Way" departs from the low-key tracks that precede it, instead presenting a firm backbone of hearty guitar while The Proper Way muses on the passing of time and the inherent joy of shirking the expectations of a lifetime filled with workdays. Lyrics like "we're just wasting our time / being nickels and dimes / our days don't have a price, so what do you say?" are delivered with a humble Neil Young-ish confidence and conclude with an invitation to go another way. The song is also the first Osguthorpe and Rogers wrote together, well before either had any way or place to record besides makeshift home studio setups. The EP concludes with the track "May You Be Well," a stab at an anthem which receives a vital assist from drummer Joshua Arena and lap steel talent Ryan Hawthorn. A song that well-wishes all good things onto the listener, it's a good way to close out this perfectly pleasant EP, at a time when people could use all the well-wishes in the world. Look out for the album on streamers Feb. 26, and for some upcoming Myers-included material, too. 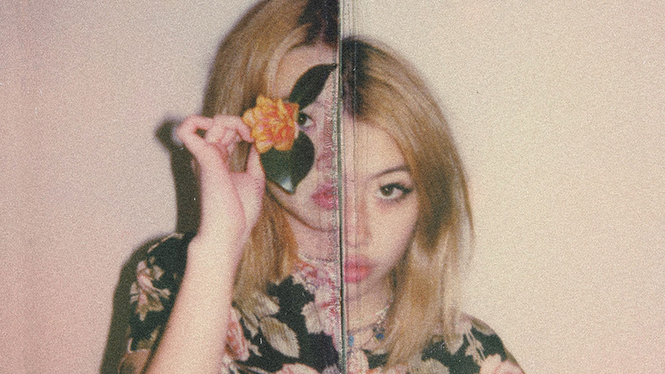 Song of the Week
There's a certain subset of indie music that just sounds like the apex of youth—in particular, that of a feminine kind of teenage-hood, flush with romanticism and introspection. This sound, even as it's been re-invented in the last decade or so, recalls a specific kind of '90s feel, too—that revolutionary pop rock made by the likes of Liz Phair, or The Sundays. In the last few years, the rising stars of this specific sound's revival are super young women—Snail Mail and Soccer Mommy come to mind. And like them, the owner of this song of the week, beabadoobee, fuses bedroom confessionalism with big, crushing guitar parts that make one wonder how someone born in 2000 can so easily co-opt the sound of '90s indie rock for her own purposes. The 20-year-old UK-based artist, born Beatrice Laus, spent her teen years crafting early fame out of soft, melodic bedroom pop on her 2018 and 2019 albums, Patched Up and Loveworm. She also has a TikTok-famous song, an ultra-twee remix of her already quite twee track "coffee." And while these productions have held up, they got nothing on her 2020 album Fake It Flowers. The whole 12-track album is superb, combining the grit of aforementioned peers like Soccer Mommy with the high-energy sugary-sweetness of fellow '90s-nostalgia-miner Hatchie. It's hard to pick a favorite, but it definitely lies somewhere between the first two tracks on the album, "Care" and "Worth It." "Care" is what hooked me, but "Worth It" finds Laus letting her super-high, sweet voice fly as she narrates the spiral of going back and forth with a crush who defaults to lead-ons. Synths shimmer subtly around the crashing guitar parts that carry the song even higher, into a territory that takes it beyond the mere angst that is the bread-and-butter of similar artists. The album does have its moodier moments, but Laus's vocals and compelling song structures are unshakably magnetic no matter what she does, and it's impossible to turn it off. On songs like "Sorry," she sings low while channeling the drama of early 20-teens bands like Wolf Alice, showing range that extends beyond the confidence of her more sugar-spiked songs. It's a damn shame she didn't get to tour this album last year, because if she had, it's likely I wouldn't need to be doing so much explaining about what makes her special—she'd already be up on the indie rocker throne. Stream Fake It Flowers wherever you stream.