Honoring Courtney Isaiah Smith, To Go Out or To Not Go Out?, Idi et Amin release singles for Candy Suck, and more.

Honoring Courtney Isaiah Smith
Despite the strange reality of shows-during-COVID, it somehow is still a shock when members of the local music community are affected by or lost due to the pandemic. That unfortunately now includes the recent loss of one of Utah's most prolific musicians, Courtney Isaiah Smith, who died after a battle with COVID on Monday, Jan. 25. A Salt Lake City native, Smith was born in 1983, and grew up in our community with an affinity for the piano that started at the age of three—he was playing church songs by the age of five. His talent was fostered by Christy Anderson at the Calvary Baptist Church, where he furthered his learning on a Hammond Organ, and where he would later, at the age of eight, go on to be a tenured musician. He continued that role throughout his life, all while becoming a brilliant composer in his own right. After studying composition at the University of Utah, Smith would go on to teach jazz piano at most of Northern Utah's major colleges and universities: Utah State University, The University of Utah, Weber State and Westminster College. Besides teaching his craft to scores of students at those schools, Smith was a pillar of the local jazz community, playing and collaborating with many, including Jazzy Olivo, and also playing with his own Courtney Isaiah Smith Quintet—notably in 2020 on the stage for Excellence in the Community's celebration of Black History Month. Beyond his well-known abilities when it came to piano, composition and jazz, Smith also experimented in beat making, releasing playful and diversely-influenced tracks on SoundCloud that ventured from his jazz roots to the likes of warped funk, psych, loops of rock 'n' roll riffs and samples from '90s cultural touchstones. That is all to say, Smith was an artist and a person with talent to spare, but also with a clearly multi-faceted approach to creating art—and showing up as an invaluable teacher, entertainer and friend to so many others in the process. To lose any member of this tight-knit music scene is a heartbreak, but to lose one of the best is a different loss altogether. Rest in Peace, Courtney Isaiah Smith.

To Go Out or To Not Go Out?
Every few months it feels apt to do a little check-in—a surveying of the grounds if you will—when it comes to where we are and how we are handling COVID in our music scene. As we enter the second month of 2021, things don't seem to be much different from—or indeed better than—they were last year, despite all the "good riddance" vibrations we collectively sent off on December 31, 2020. A positive note is that musicians seem to be continuing the roll-out of new music while they're stuck at home with few opportunities to perform safely—City Weekly is tracking around five locals with albums or EPs on the way in the coming months. But on the negative side is the looming threat of—shudder—new strains of the virus. On top of the now-officially-spreading U.K. variant, we now have one that's developed exclusively in California, the state that's been booming with cases in the last month, and which, as of press time, found Southern California at 0% availability for ICU beds. Now, anyone in the entertainment industry knows how much movement there is between California and Utah, even with COVID restrictions in place. Utah has always been a hot spot for out-of-state creatives to come do their thing on the cheap, and that hasn't changed with the pandemic (your editor may or may not know a few people in the film, photo and production world). What I'm getting at is, the likelihood of new variants reaching Utah is probably pretty high, and so the question arises—is there another all-venue shutdown coming soon? Most venues that closed in 2020 haven't re-opened at all, but a few have. Will the many different social-distancing models developed by these few venues hold up against a more contagious virus, as the UK strain is purported to be? Even with a new President in office, will the federal government come through for small businesses in time for those that have reopened to close their doors before the new COVID storm hits? These are questions this little writer doesn't have the answers to, but ones that I think we should all be considering as we decide "to go out, or not to go out?" 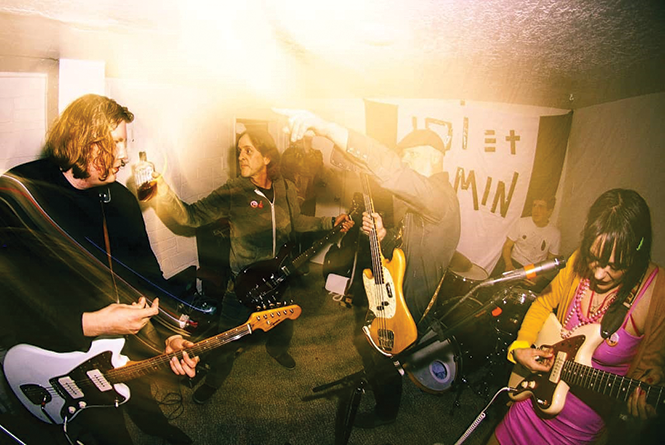 Idi et Amin release singles for Candy Suck
Shoegaze is the kind of music that gives and gives—reverb-erating, one might say (that's a pun about reverb pedals). And the shoegaze of local couple and musical power duo Idi et Amin keeps giving and giving, too. After their 2019 release Texas Rose quietly established them as one of the better bands exploring the sound—which, with all its guitar layers, is difficult to perfect and very easy to get lost in—they released the pandemic EP A Phone in Kyoto, all while prepping for another full-length release in this year's upcoming Candy Suck. While those two prior releases perfectly balanced glittery, crunchy, punchy noise with saccharine guitar melodies—Texas Rose truly feels like something that would have found a home at Creation Records during their heyday—their new singles, released as the EP The Remedies for Violations on Jan. 21, are altogether more chill. Guitars don't wail here as much as they saunter along merrily, under a quite sunny disposition. The vocals of Rocky Maldonado and Catalina Gallegos are the same as they have been on past releases—perfectly subtle delivery of incomprehensible lyrics that are a wash of soft sound, meant basically to contrast with the roughness of the guitars. "Rain Brunette" and "Porcelain Boy" are honeyed tracks that fit well together, though almost too similar in pacing to notice there's been a switch when the first cedes to the second. While listening, one feels slightly nostalgic for the aggressive melodicisms and more freely noisy production from past releases, but it also feels nice to catch a glimpse of Idi et Amin's softer side. And that's not to say that these new songs are necessarily soft—they still hammer slowly—but "Porcelain Boy" really is a gentle ride. The songs are up on YouTube as what Maldonado calls an "analogue release," but one that shouldn't be too much of a hassle for fans of vintage music who already use YouTube to listen to music. The new full-length Candy Suck will be out later in February, along with a collection of singles from their last releases and a few pieces of unreleased material. Visit the YouTube page of Rocky Maldonado to listen to The Remedies for Violations, and follow @idi_et_amin on Instagram for updates and news on the upcoming releases.

Sweetheartz DIVAZ asks "Be Mine?"
Don't have a date this Valentine's day? Well, luckily it's never seemed like a more appropriate time to be single, and to instead turn to your squad—or, as it's called more often these days, your pod. There's also no better space to go with your closest besties than the wild'n-out friendly space of a local drag show, so if you don't have plans for V-day yet, you have them now. Swing by the Metro Music Hall for a night of fabulous drag drama put on by the one and only DIVAZ. The theme-maniacs are taking on the season of love this time around, and their over-the-top antics will feature covers and costumes referencing all sorts of maestros of love—"I Love Lucy," Elvis, Lady Gaga, Tina Turner, Neil Diamond, Bette Midler and of course, Dolly Parton. Anybody ever notice that "Parton" could be an anagram for "Patron?" As in, "Patron of the Drag Arts," "Patron of the COVID vaccine Moderna," etc. There are also some newcomers to the DIVAZ's camp-ification of icons, including Lizzo—the voice of confidence in modern America—and, in a way that feels a long time coming, Taylor Swift. Now, maybe queens have been parodying Swift for some time already, but now feels like the most timely moment for Swiftian interpretation, since she has recently become a queen of sorts herself by way of her wave of quarantine releases. But Swift is also obviously the modern queen of heartbreak and love songs alike. Her repertoire is perfect fodder for the DIVAZ, and the only question left is which of Swift's hits will the audience be graced with? "Wildest Dreams," "Love Story," or the tumultuous "Blank Space?" My money's on the high-drama of "Blank Space," since rage over heartbreak may well resonate with an audience full of people still navigating a rather heartbreaking pandemic. If this sounds like the perfect Valentine's date to you and yours, visit thevivaladivashow.com for more info on their COVID protocols and tickets, which are discounted for groups. 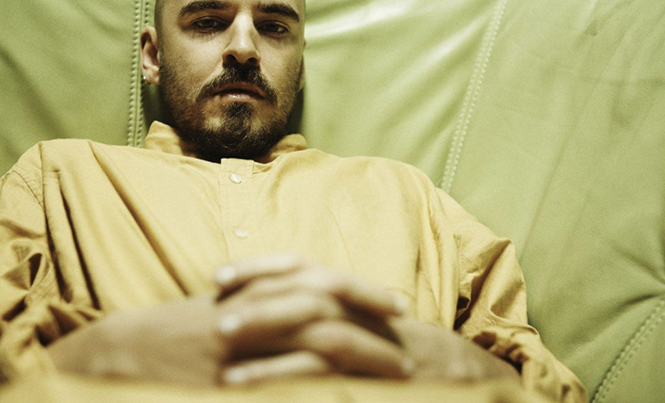 Song of the Week: "Cheater" by Wilma Archer
With local music news a little shriveled up this dry COVID winter, your music editor thought it would be a fun idea to reserve this last spot of the music section for a new weekly tradition that's easygoing and honestly, a little self-indulgent for your grumpy, moody, live-music-missing editor. Introducing Song of the Week, a new mini-feature that will persist till the end of the pandemic, whenever that might be. Our first entry will sit well for fans of Kanye-era R&B production, the electronica-luv of Caribou and or the jazz-rooted, collaborative experimentalisms of BADBADNOTGOOD. "Cheater" by Wilma Archer hails from a delightfully unpredictable album, 2020's A Western Circular, which follows the 2019 debut by Archer and his collaborator Wilma Vritra, Burd. Criminally under-reviewed in the U.S. at least, the U.K.-based Archer uses a handy cast of well-known names like the late MF DOOM and Future Islands' Samuel T. Herring to add extra flair to his pile of lackadaisical funk 'n' jazz, which flits from dense yet atmospheric gloom to bright catharsis from track to track. While most of the album relies on plucky upright bass to create its wash of emotions, "Cheater" is the song that will make your ears truly perk up. The song ripples with a linty, persistent beat on which brass instrumentation marches along with an irresistibly sexy swagger, one that finds a perfect partner in Sudan Archer, the song's vocal feature. The drama of "Cheater" makes it hard to place within the dull days of COVID, and while I usually queue it up while I'm slinging beers at my bar job, I think it warrants putting on repeat while you mix an ice-cold cocktail in low light on some otherwise mild night, then letting the rest of the album play out after it while you sip the whole thing down at your kitchen counter. Cheers to "Cheater." Stream it wherever you stream.