Southernmost Gravy and Aurhe Shake Up Kilby Court, The Beehive Has a Patreon Now, , The Depot Opens the Year with Carver Louis, and more. 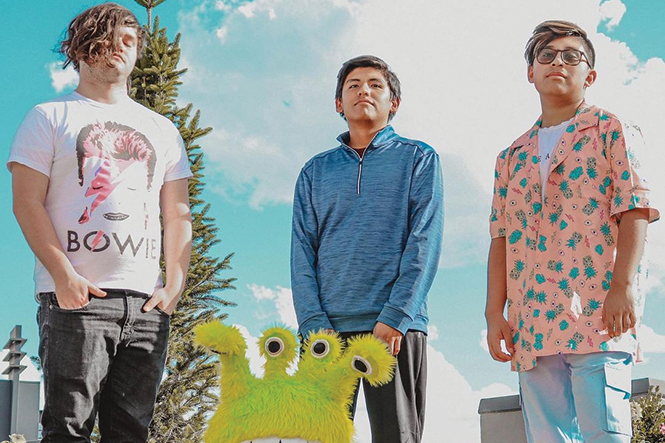 Southernmost Gravy and Aurhe Shake Up Kilby Court
The young have a way of re-interpreting genres of old that keeps things fresh, no matter how bygone things seem to get. Two acts coming through Kilby Court on Thursday, Jan 14 have some novel stuff to play to the COVID-capped audience, stuff that will shake off any preconceptions that these genres are dead or uninteresting. First, there's the super-youthful band Southernmost Gravy, who are first notable for their goofy name, but secondly and more importantly for their adoption of EDM (the soundtrack of the early aughts, alt and pop alike) as their own experimental playground. Despite the band being made up of teenagers who were probably in elementary school when the genre was at its peak, the three-piece has released two full albums as of 2020, dissecting EDM into pared down, minimal compositions that verge into dream pop territory despite the fact that EDM is only historically dreamy for ravers. These kids are too young to rave, but apparently not too young to creatively reimagine a genre that's felt like a very "done" sound for years now. And, they've got yet another album on the way, working with older and more established local names like Brother. and Suit Up Soldier. They're joined by very different company on stage, by way of Lehi-based Aurhe. The working name of Ava Stone, Aurhe is a powerhouse synthesis of '80s hair metal and aughts emo—and not the melodic kind, but the Vans Warped Tour kind. Aurhe appropriates glam rock shredding, then pairs it with vocals that could contend with those of Paramore's Hayley Williams, especially on "Summer Song," where Stone belts over electrifying riffs. Other 2020 singles include "Wildflower" and "Take a Breath," the former heavy on the '80s rock riffs found on "Summer Song," and the latter heavy on the neon aughts-emo styling. The two genres, though decades apart, always had some things in common—over-the-top glamor, a showy edginess, the starkly similar reliance on power chords—but it's pretty unusual to see a young artist like Stone calling back to either, let alone both. If there were ever an all-ages show appreciate an all-ages cast of talent, this is the one. Visit sartainandsaunders.com for tickets and more info.

The Beehive Has a Patreon Now
When The Beehive was first introduced to the world, it was rickety as hell. The small space at 666 S. State (yes, that's the real address) was a shell of a venue, with a bathroom door that didn't really close that well, a crisp draft in the air and the general feel of a haunted, abandoned building—which is pretty much what it was. Since those early days a few years back, though, The Beehive has been transformed into a glowing communal space for music and local arts in general, complete with a little vegan restaurant nestled in the front of the space called, fittingly, Mark of the Beastro. Over the course of the pandemic, locals sought to support the venue, which was closed like so many others for the bulk of last year save for a few random, socially-distanced shows. Supporters like Petr Chubak ran virtual shows such as the Beehive Instafest with the help of other local musicians, seeking donations during the course of the live-streams. Now, though, the folks at The Beehive have made it much easier to support the venue's survival, as we enter a new year riddled with just as much risk for such a small, young venue. Like so many others, they've turned to Patreon as a way to get some consistent income going. Running with the Instafest model, the Beehive Patreon offers tiers that include access to live-stream sets, behind-the-scenes business at The Beehive and a specially-produced music video courtesy of Short Round Films. And there is, of course, a tier just for those who can only afford to chip in, with no added perks besides the knowledge that one is helping keep The Beehive alive. If you're a fan of the arts fostered by this venue, or would like to one day visit it when it reopens, visit them and sign up for a tier on Patreon by searching for The Beehive.

The Depot Opens the Year with Carver Louis
It's no mystery as to why a large venue like The Depot hosted very, very few shows in 2020—not only is it dependent on large crowds to fill its space, but is mainly home to touring acts, which were all-but-non-existent over the past year. That, and it's operated by LiveNation, the mega-venue conglomerate that's taken over big venues all over the country. LiveNation was pretty quiet during the pandemic, but now its Depot holding has a new lease on life with its first upcoming show of the new year, after a few scant sets like the Royal Bliss Thanksgiving bash back in November. The upcoming show, which features solo artist Carver Louis, will feature new rules at the 21+ venue—including, obviously, the required wearing of face masks while inside the venue, assigned entry times per ticket and all groups entering at the same time with their grouped tickets. Ahead of this first show in so long, The Depot is also including a very explicit warning in their description of the event, more so than any other venue in town—perhaps owing to The Depot's place in a national venue conglomerate that's beholden to more seriousness around COVID than is found in our own conservative state. Their warning includes a reminder that COVID is a deadly, "extremely contagious" disease (perhaps even more so if that British strain spreads, eh?), and that any attendees of shows at The Depot are voluntarily assuming all risks related to going into an indoor space with other people during a pandemic. LiveNation is certainly covering their bases. As for the entertainment for this first show at the venue in ages, Carver Louis is a local—to be specific, an up-and-coming country singer from Park City. If you've missed nights at The Depot especially this past year, then don't miss this chance to visit this Friday, Jan. 5 at 8 p.m. Tickets range from $25 to $45. Visit depotslc.com for more details.

Jacob T. Skeen and Lord Vox visit the Urban Lounge
A one-man band isn't something you see every day, but Jacob T. Skeen is Utah's very own, and he's playing this Thursday, Jan. 14 at the Urban Lounge. With his tight little kit of oddly fitted drums (the hi-hat is sideways by his knee), snarling rockabilly guitar and a vintage twanging voice, Skeen manages to sound like much more than the single man that he is—and all with with perfectly slicked back hair and a tidy, old-fashioned suit. His debut album, Death, Thou Shalt Die, came out on the heels of the beginning of the pandemic in April 2020, which led to show and tour cancelations for the artist. It's a shame, because the album is foot-stomping blues for any lover of real rock 'n' roll, or the soulful, tortured origins of what would become in the '90s the rather campy genre of psychobilly. And though Skeen's whole deal could come off as gimmicky, what he really puts out there is a novel character who thrashes away at his kit, with songs both classy and spooky, looking like a 1950s church pastor cursed to fight off the devil with gothic riffs alone. He's brought his act to a few different venues over the course of the last year, though not many, for obvious reasons. He'll find support in a band that's been doing much the same—Lord Vox, the atmospheric psych rock outfit that played shows constantly since their conception, until the pandemic hit. Though psych rock has been, in recent years, somewhat done to death around SLC, Lord Vox revived it thanks in part to soulful vocals from frontman Nahum Reyes—who, like Jacob T. Skeen, favors the drama of a memorable outfit, via the sweeping black cloak that swings around his shoulders at each show. Lord Vox has been understandably less busy this past year, since it's harder for bands to practice together during a pandemic, but they still managed to put out their early 2020 single "Even in the Night." Both acts will find an opener in The Fervors, who seem to have been busier than any other opening band in the past year. As with all shows during the pandemic, Urban Lounge is requiring masks, tickets bought in groups of up to six people and social distancing when away from one's group at the show. Visit sartainandsaunders.com for tickets and more info.

Gifted Music School Streams 2020 Showcase
Though we are now well into the new year, there's still plenty of time for reflection on the year now behind us, and that includes looking back at the progress made by students like those at the Gifted Music School. The local non-profit specializes in offering expertise and training to young musicians from all backgrounds, through classes structured for students of all ages and through public school outreach programs like GRIT. Though just marking their 12-year anniversary here in 2021, the school has already made leaps and bounds in the music education world, leading young students to places in prestigious music programs all around the country—and that progress hasn't stopped during the pandemic. Throughout 2020, the school has still conducted or been featured in live-stream events, such as an August appearance made by their young violinists on an Excellence in the Community stream, or last May's Resilience Celebration. Now they want to give the community a chance to appreciate the talents and growth of their 2020 Conservatory Starling and Dummer scholarship recipients at a Winter Concert that's unlike any before it, since it's online. Members of the Conservatory program are the Gifted Music School's highest tier of students, ones who are prepared to move on to programs and conservatories of merit all over the country. Featuring the talents of the Gifted Music School's young violinists—Makenzie Hart, Ezekiel Sokoloff, Aryanna Holmes, Ellen Hayashi—the Winter Concert will also feature pianists Dr. Whitney Pizza, faculty at the school, and co-founder Dr. Vera Oussetskaia. The stream will be available at 7 p.m. on Gifted Music School's Facebook (facebook.com/giftedmusicschool), their YouTube (@giftedmusicschool) or on their website (giftedmusicschool.org/winter-concert).