SUNDANCE CONCERTS
I’ve said it before, and I’ll say it again—gaining access to concerts during the Sundance Film Festival can be a bitch for anyone without proper credentials and/or tight networking skills. Rather than face freezing temperatures and humiliating rejection, focus on events open to the public including the new Salt Lake City Festival Cafe, located in the Beehive Tea Room (12 W. 300 South). Starting Jan. 18 and continuing through Jan. 26, the cafe will feature an eclectic lineup including the Red Rock Hot Club, Bob Moss, Rauber-Prinz Trio, Jo’mo’ka, Global Cocktail and Latin Jazz Factory All-Stars. Radical Rat’s Spur Bar residency (350 Main, Park City) is another good option, with local and touring acts playing intimate day and evening shows today through Jan. 26. Highlights include Leopold and His Fiction, Gigi Love and Emily Kurn. BMI’s Turning Leaf Lounge (751 Main, Park City) hosts several singer/songwriters including Joshua James (!), as space allows. New Frontier on Main (333 Main, Park City) features several cool multimedia events including a live performance by Califone playing along with Brett Green’s animated films, and DJ Spooky! Again, space is limited, so get there early. Ditto for the Star Bar at night. Info: Sundance.org/Festival; RadicalRat.com

AKON
Senegalese-American performer Akon is quickly earning a reputation as somewhat of a loose cannon—like 30 Rock’s Tracy Morgan, or maybe Charlie Sheen in the ’90s—whose mostly onstage antics often threaten to overshadow his Grammy-nominated skills. For those who don’t scour entertainment headlines for salacious watercooler fodder, in 2007, Akon allegedly simulated sex with a minor, allegedly threw a teenager off the stage and onto a woman who suffered a concussion, and released a song titled, “Sorry Blame It On Me” to which many people obliged. Should he learn from his mistakes, Akon will likely stick around for some time. His skills as an R&B singer, songwriter and producer are no joke. The blame-game song is seriously catchy, and “Bartender,” his collaboration with T Pain, sparked more than a few summer flings. Like Snoop says, that’s some sensual seduction. Pony up the dough and get your freak on already. Harry O’s, 427 S. Main, Park City, 9 p.m. Tickets: SmithsTix.com

Tuesday 1.22
MAC LETHAL
Oh Mac Lethal, you had me at “Self-absorbed women don’t make good lovers.” Any artist who renounces hot but arrogant models in favor of average-looking but genuine and interesting ladies has my attention. Lethal, another standout on the Rhymesayers roster, deserves recognition not only for exhibiting stand-up character, but also quick wit and smooth narrative style that place him on par with Aesop Rock and fellow label mate Brother Ali. His rhymes are humorous and intelligent but, perhaps most importantly, they resonate with guys and gals who don’t necessarily spend the weekend passing the Courvoisier. Lethal’s subject matter is more universal territory, from unfit mothers to mad ex-love and proving oneself as an unsuspecting young-looking emcee. Kilby Court, 741 S. 330 West, 8 p.m. (with Grieves and Blue Collar Theory) 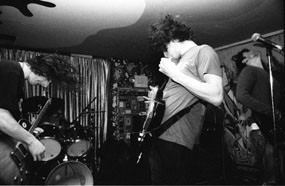 Wednesday 1.23
ZELAZOWA
As a general rule of thumb, musicians need to tour like crazy if they ever want to get signed. Of course, there’s an exception to every rule—and Zelazowa found out the hard way. In 2006, the Philadelphia-based artists were listed as the only independently touring rock band to play 220 shows without securing a record deal. They funneled their frustration into What They Want Us to Be, We Can’t Always Be ... , a short documentary detailing a seemingly Sisyphean journey. Judging by their recorded material, it should be only a matter of time before Zelazowa gains more recognition. There’s no obvious reason why they should fail, with deep, brooding vocals, prominent bass lines and an overall spaced-out vibe that’s neither groundbreaking nor forgettable. Maybe it’s just timing. In any case, they could use your support—and deserve some attention. Kilby Court, 741 S. 330 West, 8 p.m.