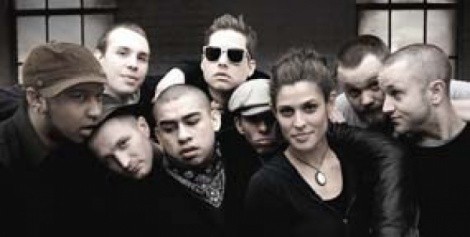 ANDREW BIRD, JOSH RITTER
Andrew Bird is one complex fellow. The Chicago-based instrumentalist navigates a space occupied by Beirut, Arcade Fire, Sufjan Stevens and other modern-day troubadours who draw on an arsenal of instruments to produce fantastic indie rock that sounds as new as it does old and oddly familiar. While he’s somewhat toned down his experimental approach to recording, his last release Armchair Apocrypha (2007) proves he is still one of today’s most refreshing solo artists—and a darn fine whistler. Unlike a certain band that played last year’s Twilight Concert Series, Bird does it all live. No whistle-syncing, or whatever. Josh Ritter, often cited as “the next Bob Dylan” or “soon-to-be folk legend,” writes powerful songs heavy on narrative, wordplay and gritty imagery. He also blogs for Huffington Post, but we’re glad Arianna Huffington doesn’t sing on his albums. Gallivan Center, 239 S. Main, 7 p.m. All-ages. Free

last week’s Live), but perhaps Doomtree (left) just sounds like a cool title for the next Tim Burton movie. If so, take a moment to familiarize yourself with the Minneapolis collective—a crew, 11 strong and getting stronger weeks before their long-awaited eponymous debut hits streets July 29. Eight years in the making, the 21-track album highlights the nine members’ individual talents as well as their strength in numbers. Doomtree isn’t a crew—they’re a bona fide family spitting grace and hellfire over ominous beats. Regarded as one of their hometown’s top live acts, they give 100 percent at every show because there’s no alternative: “We be all in the struggle, man/ grind hard/ 24-7, man.” Believe that. Avalon, 3605 S. State, 6:30 p.m. All-ages. Tickets: SmithsTix.com (with Flobots)

Saturday 7.19
SMITH BROS. DIRT BAND
In a way, Smith Bros. Dirt Band are punk rock. They don’t play punk music—far from it, in fact. But when founder Randall Smith started the band four decades ago, he did so in part to rock the establishment. Back in college, when his required classical music listening list didn’t fly, he discovered fast-paced bluegrass and jug band albums—and shortly thereafter formed his own group to keep the sounds alive in Salt Lake City. Their two vinyl releases on ‘70s label Ham & Egg Records aren’t available on CD (yet), which is a shame because judging by reviews of Once Over Easy (1976) and Stuck in Salt Lake (1979), the albums are a welcome jig down memory lane. Until the band goes digital, you’ll have to see them live to experience their quick wit and fast-picking down-home groove—a unique experience in its own right, with Smith’s daughter joining the group on fiddle. Vieve Gore Concert Hall, Westminster College, 1840 S. 1300 East, 7:30 p.m. All-ages. Tickets: 832-2457

Wednesday 7.23
FLEET FOXES, THE DUTCHESS & THE DUKE
Fleet Foxes sound both familiar and otherworldly—a grounded bunch whose collective output resonates as if transmitted from up on high. To wit, several tracks off their eponymous album reference epic journeys: “Come down from the mountain, you have been gone too long” and “She left a week to roam/your protector’s coming home,” all unfolding in a pastoral setting. Frontman Robin Pecknold sings in a style similar to My Morning Jacket’s Jim James if James were a ’50s crooner hollering down a tunnel. This show is likely the last time you’ll have the opportunity to see Fleet Foxes at Kilby. They’re traveling a steady trajectory to Big Time and will open for Wilco’s sold-out Red Butte gig in August. Foxes will be joined by two solid openers: The Dutchess & The Duke—no frills acoustic Americana with loose male/female harmonies that have a wonderful impromptu quality reminiscent of bonfire sing-alongs—and Salt Lake City’s The Devil Whale who might be playing their last gig with guitarist Marcus Bently tonight. Kilby Court, 741 S. 330 West, 7 p.m. Tickets: 24Tix.com