Oh! Wild Birds have been performing for nearly a year now, but if for some reason you’ve missed their live show now is a perfect time to get caught up on the local quintet. Armed with a proportionate arsenal of noise generators, including the underused bouzouki—a pear-shaped string instrument plucked to great effect in, largely, Balkan music—plus keyboards, mandolin, violin, drums, guitar, keys and flute, Oh! Wild Birds produce searing, stark melodies with soothing but eerie vocals not unlike Iron & Wine’s Sam Beam or Xiu Xiu’s Jamie Stewart. It’s quite beautiful. Keep an eye out for a forthcoming debut EP, and in the meantime come to the show. The Urban Lounge, 241 S. 500 East, 10 p.m. Info: 746-0557

Friday 6.6
CALICO CD RELEASE
Good things come to those who wait—especially when

Calico is concerned. Wait, and you’ll better appreciate the local collective’s aesthetic; their celebration of restraint manifested in rich, sparse, deliberate instrumentation. “Wait/ where the ocean calls/ in the sun/ in the sun,” Brady Gunnell sings on Black Pyramid, the accomplished follow-up to Calico’s previous eponymous release. Romantic, dramatic, but never overblown, the album tempts and flirts like a wolf in sheep’s clothing. Pyramid brings Gunnell’s vocals front and center for several numbers, displaying a cool assuredness that’s downright delicious, especially when he suggests, “Let the blood flow, baby. Let the blooood flow.” It sounds wrong for all the right reasons. Calico recently completed a mini Northwest tour which hit a giant festival featuring 25 bands. The gig helped clarify the group’s need for less speed: “Giving Calico 20 minutes to play is, essentially, a death sentence for our music.” Settle in for the long haul, tonight, when the band releases Pyramid to the public. It’s well worth your time. Slowtrain, 221 E. Broadway, 7 p.m. All-ages. Info: 364-2611

When Salt Lake City rockers Thunderfist released Barefoot & Pregnant in 1998, and soon after entered City Weekly’s Showdown to South by Southwest band competition using a beer cooler stuffed with an (empty) Pabst Blue Ribbon case as a press kit, it was clear: These boys are career artists! They showed all rock & roll doubters by surviving 10 years on SLC’s grimiest stages, releasing five increasingly smokin’ CDs (No. 6 is on the way) and touring as their vans and livers allowed. Come celebrate a decade of decibels as Thunderfist rocks all damn night with every past member of the band (even the one who spontaneously combusted) for no cover (just as Burt’s did back in the day). Burt’s Tiki Lounge, 726 S. State, 10 p.m. (with Swamp Donkeys)

Saturday 6.7
¡ANDALE! CD RELEASE
Listening to ¡Andale! inspires a tinge of sympathy for certain subjects berated in the group’s more acrid tracks. “Liar. Liar. Liar. Liar … I can see right through you,” lead vocalist Memorie Morrison sings to some sorry sap on “Interceptor,” her voice dripping with derision. Of course, the next song off the local quartet’s long-awaited, officially official eponymous debut hints at a sweet, sensitive side beneath the salty grit: “I know it’s hard to believe that I ever loved you dear/ I know it’s hard to believe I’m holding back my tears.” So, you know—stay on their good side. It won’t be hard if you dig solid, stripped-down tunes that are punk like Mike Watt. The famed Minuteman bassist put it best when he said, “If you’re punk, you can play anything you want.” Which means ¡Andale! can safely be bratty and wise; slightly sloppy and solid. Recorded by guitarist Mike Sasich and released on Pseudo Recordings, the group’s short and not-so-sweet album is 10 tracks of stripped down, polished—but never slick—material that leaves a mark long after the teeth sink in. Pick up a copy, tonight. The Urban Lounge, 241 S. 500 East, 10 p.m. Info: 746-0557 (with Pink Lightnin’ and Junta DeVille)

Monday 6.9
KANYE WEST, RIHANNA
Is there life on Mars? Like a hip-hop David Bowie, Kanye West doesn’t seem so interested in solving the red planet riddle as he is in creating his own far-out universe. Makes sense, if you know anything about the cunning mogul (who surprisingly hasn’t yet started his own West awards ceremony). Love him or hate him, West knows what he wants and isn’t afraid to pursue it. Good news for anyone who can look past the enormous ego and embarrassing bravado to simply enjoy the incredibly solid hits spanning three groundbreaking albums. West hits town tonight on his Glow In the Dark tour with Rihanna who could probably just perform “Umbrella” all night without much complaint from the crowd. E Center, 3200 S. Decker Lake Dr., 7 p.m. All-ages. Tickets: SmithsTix.com 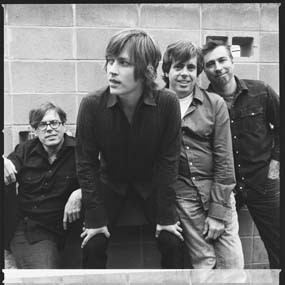 Wednesday 6.11
OLD 97s
Tired of blog-machine-hyped Band of the Moment? Maybe it’s time to curl up with an old favorite—specifically, Old 97s. The veteran alt-country band has been cranking out timeless material, off and on, for the past 15 years. Their new Blame It On Gravity instantly sticks to yer bones/heart/soul with clean hooks, crisp vocals and no-fuss lyrics that most folks can relate to. Which isn’t to say the seminal artists play it safe. Gravity charts new territory, zigzagging down a romantic dirt road with plenty of jaunty, cutting pop (“I Will Remain”), romantic Latin-kissed (“Dance With Me,” “She Loves The Sunset”), country and classic-rock pit stops. Refreshing like a retro bottle of Coca-Cola—minus the brand endorsements, of course. Paladium, 615 N. 400 West, 7 p.m. Tickets: 24Tix.com