Marqueza releases EP Omizu Diosa
Local artist Marqueza has strayed from her typical solo work ethic with her newest EP, Omizu Diosa, a collaboration between herself and fellow local Adam Fuller, of the band Ivouries. Where Marqueza usually uses her music as a vehicle for explorations of self-love and understanding, in Omizu Diosa (which translates to "water goddess" in Japanese and Spanish) the rippling rings of her pondering expand to include feelings for (and focus on) another. Her tendency to wander emotively through songs is left intact here, but with Fuller's co-production, the three songs on Omizu Diosa feel not only refreshing, but like Marqueza's sound reaching a new clarity. Her lenses of sight and feeling remain the same; multiculturalism is always integral to Marqueza's musical self, as is her identity as a deep-feeling Piscean. But here she becomes a self-actualized mermaid, thanks to delicate vocal effects and crystalline synths that build up on her natural sweetness. Indeed, opener "Kurione'' references the Japanese term for "clione," an angelic-looking sea creature that represents the shiny surface of the sea—aesthetically, the song is exactly that, but Marqueza also lyrically touches on surface-level things like performance and new love, whether it's outward or inner. She sings, "I know I could be your angel if you let me / I know I could be my angel if I let me." On "Aquamarine," she begins with bare, sweet vocals, then slow ringing piano parts, then a tender—if not siren-like— invitation to "the deep." "Nocturno" is the sensual conclusion, though its quick beats and energetic, bright synths contrast with Marqueza's demands to keep the passion slow. Meanwhile Fuller's presence makes an indelible, transformative impression on Marqueza's musical foundation, and it's hard to tell who is whose muse here—which is part of the magic. Stream it wherever you stream, and follow both on Instagram at @marina.marqueza and @ivouriesfats.

Hive Music Festival Announces Summer Lineup
You read that right: There's a music festival coming to Utah. Slated for early August this year, the Hive Music Festival is the first festival in the state, it seems, to firmly plan for live music to happen in a festival setting—and more than that, to believe in the possibility so much that they've actually got firm dates. Staged by the hip hop event production company Select Sound Entertainment, it's a festival in the truest form, with a lineup filled to the brim with acts from all over the country—unless someone else is daring enough to beat them to the punch, this will probably be the first major, touring act-heavy event of 2021 in Utah. The two-day festival includes headliners $uicideboy$ on the opening Friday night, followed by Utah's very own adoptee Post Malone on Saturday night. Other notable acts include Trippie Redd, Flatbush Zombies, Ski Mask the Slump God, DaBaby, JPEG Mafia, Flo Milli and more than two dozen others. At the moment, it looks like no local talent has been announced to open for these more established acts—but here's to hoping that's only because the announcement just came on March 15. Slated for August 6 - 7, the event is all-ages and will unfold at the Utah State Fair Park. Ticket sales opened on March 19, and though the first three tiers have sold out, fourth tier GA and VIP sales are still open, starting at $349, with payment plans available. Tickets are non-refundable, even in the event of another surge of COVID, which would trigger the festival's postponement. The festival is also an opportunity for event production workers to find some employment, info for which can be found at hivefestival.com, along with more general info. It's early yet, so follow the festival on Instagram at @hivefestivalslc for updates, and cross your fingers that this might be the start of festival season returning to SLC. 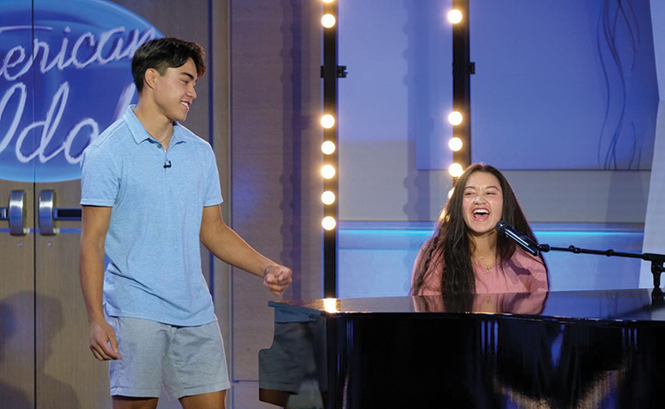 Utah Stars on American Idol: COVID Style
While television has done a good job of concealing all the adaptations it has had to make in the face of the pandemic, American Idol's changes ended up making the show more accessible to American singers all over the country. At the end of February, the 19th season of the singing competition launched, with a twist. Gone were the days of massive lines of wannabe contestants lining convention centers in a rotation of US cities. In its place came the Zoom call audition, which also opened the doors to contestants in all 50 states, a first for the show. It also gave access to several Utah singers, all of whom have musical hustles that precede the show. Among those Utahns moving on in the show are the couple Grayson and Lizzy O'Very, both of whom are active local musicians and owners of O'Very Studios—Grayson released his first single "Numb" last month, and Lizzy lends her soprano voice to whimsical dream pop compositions. There's also the sibling duo of Ammon and Liahona Olayan, who released an EP together in 2019 and in 2020 were featured on a youth album for The Church of Jesus Christ of Latter-day Saints. Young business school drop-out turned Berklee Music School student Wyatt Pike also made the cut, and for Gen Z representation, there's Abby LeBaron, a 19-year-old whose music career is thus far mostly alive on TikTok. Besides repping Utah, these American maybe-Idols also serve as a reminder that today's generation of competitors have many avenues to "making it," and American Idol is just one of them. Tune in on Sunday and Monday nights at 7 p.m. on ABC to follow their progress.

Urban Lounge Backyard Shows, Concert Cruises Recommence
Last spring, warmer weather became merely a vehicle to see friends in the safety of the outdoors, in a world where being indoors with lots of people was no longer safe. This spring, though, the air feels a little fresher, the sun a little more vibrant as we welcome not just a new season, but what feels like the beginning of the end of COVID. And while we wait for most people to get vaccinated, outdoor entertainment options are still a great way to be. The Urban Lounge is once again launching their outdoor concert series, which last year found them using their back lot for a safe version of concert-going through the summer. The shows seem to follow a model that's a lot different than pre-COVID indoors shows, with bands starting and ending earlier—there's no chance to get rowdy and forget yourself here, folks. S&S, owners of the Urban Lounge, also recently announced that they'll be keeping mask mandates in place until a target date of July 1—with the caveat that as vaccine roll-out changes, so could this goal. The outdoor shows kick off April 2 with not music, but stand-up. The Bawdily Function will feature the talents of locals Amerah Ames, Arash Tadjiki and Sloan Valenzuela. Tickets for that show are $10, and the show starts seating at 6 p.m. On April 3, Jim Bone & The Dig, Planet No Planet and The Swinging Lights will bring the music back to the stage for a $15 set starting at 6 p.m. The following week finds the venue hosting back-to-back pre-weekend gigs, with Red Bennies and Musor opening things up on Thursday, April 8 for $10 at 6 p.m. and Lord Vox, Goodbye Clocks and The Graylings playing on Friday, April 9, same time, same ticket price. Visit theurbanloungeslc.com for all upcoming dates, and book your tickets quick. All COVID protocols remain intact.

Song of the Week: "Oldies playing in another room and it's raining" by Nemo's Dreamscapes
While I don't usually seek out ASMR, there are arguments to be made that it can be music and music can be it—examples like the viral "lo-fi hip hop beats to study and relax to" video prove it. If you don't know what the hell either of these things are, you simply must Google it—just like I was forced to Google "Oldies playing in another room and it's raining" when it was mentioned by someone on Twitter. The screenshot she shared of the YouTube video was a still of a snoozing Snow White, upping my immediate impression that this whole thing seemed kind of creepy. Upon my Google, I found a video titled "Oldies music playing in another room and it's raining (no thunders, fireplace) 1 HOUR ASMR v.19", accompanied by an image of Wendy from Peter Pan flickering with a faux-film effect, cartoon "Zzz"'s floating above her head. And as promised, fuzzy '30s-ish bassoons and trumpets music began playing (the author cited the song as pulled from public domain), muffled as though from another room—the snapping of a fireplace and an insistent drizzle of rain rounded out the artificial coziness. On the sidebar were more "dreamscapes," with thumbnails of characters like Betty Boop, Jerry the mouse, Sleeping Beauty and Donald Duck, and qualifications like "(no rain)," "oldies playing in a tent," "oldies playing in another room but you're on the porch," etc. It wasn't until playing the thumbnail with two cartoon cats perched on a window overlooking the Eiffel Tower that a memory was triggered—rainy days in childhood spent watching old Disney films like The Aristocats, the clatter of my real-life surroundings combining with the old-fashioned soundtracks and the cartoon's lo-fi, plot-related noise. It makes sense that these videos, of which there are dozens, are called dreamscapes—millennial childhoods like mine, filled with media, make it hard to differentiate between sounds that are truly familiar, and sounds one simply heard on TV. Color me tripped out.