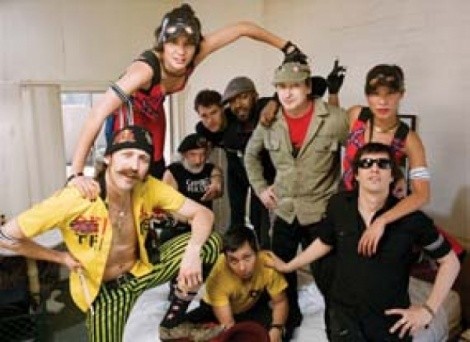 Thursday 3.6
HOLY FUCK, A PLACE TO BURY STRANGERS
Some electronic artists rely on laptops to get the job done. It’s a perfectly noble approach, though completely maddening to rock purists who consider computers a distant second to “real” instruments like guitar, bass and drums. Of course, those critics are missing out on some killer music. Maybe Holy Fuck can help them develop a modern love for futuristic sounds. The Toronto trio fuses the usual organic suspects with lo-fi casios and zero laptops to produce sprawling instrumental oddities in the vein of Battles, Maserati and TransAm. A Place to Bury Strangers takes things one step further by actually customizing tricked-out effects pedals for maximum distortion, amplification and manipulation. DeathByAudio.net features several examples of these ear-drilling instruments, including the Wave Destroyer, Optical Compressor and Double Barrel Double Fuzz Pedal which promises “extreme tweakability.” Flight of the Conchords once observed “The humans are dead,” but Holy Fuck and A Place to Bury Strangers prove they’ve found a way to live in harmony with the robotic race. The Urban Lounge, 241 S. 500 East, 10 p.m. Tickets: 24Tix.com

GOGOL BORDELLO
Gogol Bordello’s live show is an off-the-hizzy (hizzie?) party from start to finish. Now, we’re not talking about a crazy shindig where beefcakes smash beer cans over their heads. No. Gogol Bordello brings the noise and the thought-provoking conversation, weaving heated social and political commentary into their lively communal gypsy-punk anthems. Leader Eugene Hütz survived Chernobyl, so he knows a thing or two about valuing life—and, man, does he live it to the fullest. He doesn’t just wear his heart on his sleeve—he sheds all pretense to expose his soul, tendons and guts (of which he has many). Not one to shy from controversy, he takes on outmoded customs and misguided practices (see his extensive rant on the music industry) with infectious zeal. Each and every Bordello jam is oozing with virile passion. It’s raw. It’s sexual. It’s everything you need to experience after a long winter in Utah. The Paladium, 615 N. 400 West, 9 p.m. Tickets: SmithsTix.com

Sunday 3.9
SWEATSHOP UNION
Things are looking up. Until recently, touring bands often side-stepped Utah en route to more fabulous destinations—like, say, Boise. Now, out-of-state groups are not only penciling us in as a pit stop, but actually circling back from distant locales to play not one but two or even three dates in town. Canadian hip-hop collective Sweatshop Union is hitting Ogden tonight and will return in three days to turn on Salt Lake City and then Park City to their positive, sing-along sound. The seven-piece group rises above without being cheesy, seamlessly delivering in a diverse range of voices poignant lines about homogenized/sellout rappers, greed and ennui. Get in while the getting is good. Grab seconds on at Kilby on Wednesday, straight up binge at Celsius next Thursday. Brewskis, 244 25th St., Ogden, 10 p.m. Info: 801-394-1713 (with DJ Chassis)

XIU XIU, THAO NGUYEN
Listening to Xiu Xiu’s sixth full-length album is a bit like waiting for a serial killer to step out of the darkness with a nice Chianti. Or maybe realizing moments after taking far too much LSD that this is it: You’ve finally tumbled into madness. Paranoid and unsettling, Women as Lovers is also like drowning, slowly. Your limbs get warm, then numb. You feel like taking a nap and dreaming the most wonderful dreams while Jamie Stewart softly, creepily waxes poetic over heavily layered bleeps and blips, crashing and clanging in lush discordance. Just when you’ve grown accustomed to the witching hour, the album also sandwiches in a surprisingly faithful cover of David Bowie’s “Under Pressure.” Amazing. Fellow Kill Rock Stars mate Thao Nguyen is a striking newcomer whose distinct vocals orbit Cat Power and Rickie Lee Jones with a bluesy, throaty falsetto that aches and yearns as much as it flirts and threatens. Are you ready to get shaken and stirred? The Urban Lounge, 241 S. 500 East, 10 p.m. Tickets: 24Tix.com

THE HELIO SEQUENCE
Listening to The Helio Sequence’s latest release Keep Your Eyes Ahead (Sub Pop), one (OK, one obsessed with anti-heroes and the Psychedelic Furs) can’t help but imagine the Oregon duo providing the soundtrack for an updated John Hughes movie. Maybe Pretty in Pink, with Maggie Gyllenhall as Molly Ringwald and James Spader as James Spader. The album’s title track, for example, would really complement scenes in which an outsider reclaims his/her pride by making a funky dress/telling off Spader/riding a BMX bike around town. In all truth, The Helio Sequence could probably score just about any film. Their music is quite simply atmospheric. They nimbly manipulate an arsenal of organic and electronic equipment so that on record it sounds like five-plus people making magic and onstage you completely believe that just two people can produce such a giant wall of shimmering sound. Bonus points for the drummer’s jack-in-the-box movements that make him appear to be having an enjoyable seizure. Double your pleasure by checking out these dudes tonight and then again, 10 days later at Velour. Kilby Court, 741 S. 330 West, 7 p.m. All-ages. Tickets: 24Tix.com