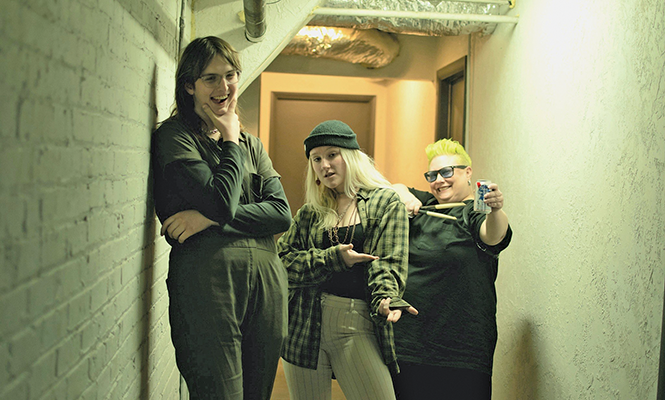 Get Funky Festival @ The Great Saltair
V2 Presents is bringing house and techno music to the Great Saltair (12408 W. Saltair Dr., Magna) with this rejuvenated festival, a renewed SLC Memorial Day weekend tradition back in '22 after a 2021 reboot. This showcase for house and electronic acts will feature two full nights (and early mornings) of performance on Friday, May 27 and Saturday, May 28. Acts on the first evening will include Green Velvet, Reel Mood, Silent Reign, Kendoll, Benny Benassi and Dom Dolla; Saturday brings AC Slater, J. Worra, Dusty Cloud, Nate Lowpass, Black V Neck and Kyle Watson. Gates for the shows open at 7 p.m., with the acts running from 8 p.m. - 2 a.m. nightly; it's an 18+ event. There are various price points for Get Funky's single day and weekend passes; specific info can be found at getfunkyfestival.com. That site also addresses FAQs like overnighting (nope), bag policies (keep 'em clear), rental lockers (they got 'em) and other very-specific-to-Saltair questions.

Pedrito Martinez Group @ JQ Lawson Capitol Theatre
The show's bio gives a sweet, full overview of this fine concert headed to the Capitol Theatre: "The Pedrito Martinez Group has its roots planted firmly in the Afro-Cuban Rumba tradition and in the bata rhythms and vocal chants of the music of Yoruba and Santeria. Ben Ratliff summed it up aptly for the New York Times calling it, 'complex, blenderized Africa-to-the-New-World funk.' Since its formation, the Pedrito Martinez group has developed into an extraordinarily tight and creative unit delighting fans worldwide." If that didn't sell you, run over to your nearest device playing YouTube and call up the band's NPR Tiny Desk concert for a sampler; this four-man band sounds significantly more dense than your average quartet, with soulful sounds that aren't heard in downtown SLC every weekend. This show takes place at the JQ Lawson Capitol Theatre (50 W. 200 South) on Friday, May 27. Tickets run $10 - 29.50, depending largely on if you're buying floor tickets or seats (it's likely some folks will find this percussive music of such quality that no seating will be necessary). For additional information see saltlakecountyarts.com.

Battle of the Bands @ DLC @ Quarters
Celebrating a first birthday, The DLC (5 E. 400 South) offers up an old-fashioned Battle of the Bands for the old-fashioned price of $5. Saturday night will be alright for (musical) fighting for the following area acts: Scheissters, Strawberry Cough, Slick Velveteens, Cudney and Beneath The Sparrows. The winner of the event gets, in no particular order of importance, bragging rights, an actual trophy; and 1,000 U.S. dollars. Okay: the money's the best "get," for sure. Meanwhile, various other fun stuff (raffles, special pricing, etc.) will be offered to fans. This May 28 show is a 21-up affair with tickets found at the door, or at quartersslc.com.

The Body @ Urban Lounge
Occasionally—and maybe more than that—you wish to go to a show with the clear intent of having your door rattled, your cobwebs cleaned, your roof raised. The Body have released a record of the 2021 vintage called I've Seen All I've Need to See, and it really does awaken the senses. The mere idea of these songs being played in a room with a massive sound system is enough to cause knees to shake and ears to twitch. This is the top-tier, heavy stuff. The Guardian goes over the top in describing the album's opening track, writing "It's no exaggeration to say this U.S. duo are one of the greatest bands working anywhere today, making metal at its most corroded. With its screams and silences, 'A Lament' seems to survey a collapsing planet." The Body plays the Urban Lounge (241 S. 500 East) on June 1 with a 7 p.m. door. Tickets at $15 can be located at 24tix.com. Also appearing are Midwife, Sympathy Pain and Last.

Crucial Salt Lake @ Kilby Court
A host of local talents will take the stage at Kilby Court (741 S. Kilby Ct.) for a Sunday day/night affair that'll include Acacia Ridge, Sunfish, Say Hey, Despite Despair, Lane & The Chain and other acts TBA. This show takes place on Sunday, May 29 with an early start time of 3 pm. Tickets are $10 (though young ones under 12 are free); full show info can be found at kilbycourt.com.

The Carousel Tour @ Metro Music Hall
This tour's a fascinating one, featuring three vocalists, bandleaders and songwriters in Laura Jane Grace, Anthony Green and Tim Kasher. The three will alternate full sets, with collaborations scattered along the way; bassist Megan Siebe and drummer Alex Kerns provide the shared rhythm section. The Houston Press notes that all three are able to blend new songs into their sets, as "Grace released two solo projects recently, 2020's critically hailed Stay Alive and a 2021 EP titled At War With The Silverfish. Kasher, also of Cursive and The Good Life, dropped new music last month, a solo album titled Middling Age. Green, who is lead singer for Circa Survive, Saosin and The Sound of Animals Fighting, presented his first collection of children's music last year." Undoubtedly Grace, best known for work with Against Me!, will bring in a ton of fans, but it's the shared experience that all the performers are shooting for with this unique live concept. Doors for this Monday, May 30 show at Metro Music Hall (615 W. 100 South) open at 6 p.m. Tickets are $25 and available at 24tix.com. Oceanator rounds out the bill. CW