JOAN OF ARC
The list of contributors to Joan of Arc’s Boo Human reads like a page out of Mark Lanegan’s back catalog. To wit, principal songwriter Tim Kinsella (Make Believe, Cap’n’Jazz, Owls) approached the group’s 11th studio album as the former Screaming Trees frontman often does—inviting friends and past collaborators to, whenever and however, flesh out a skeletal net of songs. The result: Fourteen tracks reflecting various degrees of jazz, post-punk and folk sensibilities. While the random rules invoked for Human’s recording might have easily resulted in a chaotic mess, the record instead is just eclectic enough: “Everywhere I Go” loops a beatnik’s repetitive drawl with discordant guitar and disorienting sound effects; “Laughter Reflected Back” and “Just Pack or Unpack” run parallel to Ian MacKaye’s train-of-thought delivery in Fugazi; and so forth until no clear pattern remains. How wonderful to hear a familiar sound that still twists and turns. The Urban Lounge, 241 S. 500 East, 10 p.m. Tickets: 24Tix.com (with Vile Blue Shades and Future of the Ghost)

GRAND ARCHIVES, SERA CAHOONE
Reunited and it feels so good—for Mat Brooke; for Sera Cahoone; for anyone who shed tears when cult favorite Carissa’s Wierd disintegrated years back. The indie group, which in retrospect might well deserve “super” status won hardcore followers with the kind of shimmering melodies and thoughtful, bitter subtext that might find a distant substitute in one of Death Cab for Cutie’s earliest works. But Carissa’s flock is lucky enough to have the next best thing in three spin-off projects: Ben Bridwell drives people to drink with Band of Horses; former drummer Sera Cahoone took the reins with her eponymous country band, breaking hearts with a weathered and disarming siren call; Mat Brooke, well, he came as close as any of his former collaborators to reviving Wierd’s aching pop spirit. Catch two out of three offshoots set the next generation on fire. Be patient. It’s a slow burn. In the Venue, 579 S. 200 West, 7 p.m. All-ages. Tickets: 24Tix.com

JILL COHN
Jill Cohn’s eighth album Every Street Inside Of You is not for cynics. Chances are, heartless bastard/elitist hipster types won’t even get past the album’s liner notes, in which the Seattle-based artist thanks her “spiritual teacher” Sri Gary. And that’s OK. One can only listen to so many experimental post-punk and electro-soul throwbacks before they’re cold to the idea of straightforward balladry in the strictest singer/songwriter sense. Besides, plenty of folks will warm to her honest songwriting and lush, piano-dense instrumentation—especially those who’ve caught Cohn on past SLC tours. Every Street truly shines when the glossy production makes room for Cohn’s powerful voice to take center stage, as on the hushed, aching, violin-fueled “Marshmallow Chairs,” a more substantive reflection on love lost than its name might suggest. The Woodshed, 60 E. 800 South, 9 p.m. Info: 364-0805

Saturday 5.31
PAUL JACOBSEN, BUTTERY MUFFINS, CRYPTACIZE
If you want to think of Paul Jacobsen as a country singer or folk artist, that’s fine. Thing is, though, the Salt Lake City musician seems more like a well-rounded Western performer—the kind who craves wide open spaces. Even as he exercises restraint, singing in measured—if trembling—tones, Jacobsen emanates a clear Don’t Fence Me In vibe. Paul Jacobsen & The Madison Arm, his long-awaited follow-up to the well-received 2003 debut You Might Regret You Ever Cared, is peppered with references to the West in general (“I could use some western skies tonight”) and Utah specifically (“I miss Ruth’s Diner”), sentiments largely jotted down during Jacobsen’s three-year residency in New York City. Look for further updates on the forthcoming album, due out this summer. Buttery Muffins and Kathryn Cowles round out tonight’s opening lineup before headliners Cryptacize take the stage. Muffins are a seemingly once-yearly indie-pop project featuring Will Sartain, Tolchock Trio’s Ryan Fedor, and men about town Matt Crane and Brian Pickles. Cowles is an accomplished writer/founder of the Working Dog series. She’s been testing the waters as a singer/songwriter for the past couple of years. See her master yet another craft and try to repress your jealousy. Kilby Court, 741 S. 330 West, 7:30 p.m. All-ages. Tickets: 24Tix.com 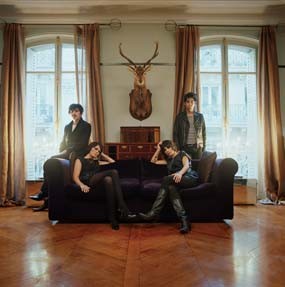 LADYTRON, DATAROCK
If you missed M.I.A. earlier this month—or if you just want to recapture all the down and dirty dance party action—strike a pose to Ladytron and Datarock, tonight. While decidedly more androgynous and futuristic than the Sri Lankan-born electro-rapper’s fantastic trip through neon-illuminated ‘90s nostalgia, tonight’s headlining acts will absolutely command the crowd to move in ultra-sleek, robotic movements. To the uninitiated, it might not sound like Ladytron’s taking any risks, but the European quartet has been making new-waves since 2001—a year ruled by the rudimentary jams of Britney Spears, N’Sync and *gulp* Enrique Iglesias. Bailamos! Ladytron’s latest release Velocifero is just as pulsating, throbbing and sexy (in an asexual way) as any of the seasoned electronic artists’ previous releases. Datarock shares Ladytron’s passion for digital programming, though theirs speaks more to “Computer Camp Love” and … What’s that? You don’t feel like moving? Unacceptable! “Now is the time on ‘Shprockets’ when we dance!” In the Venue, 579 W. 200 South, 7:30 p.m. All-ages. Tickets: 24Tix.com