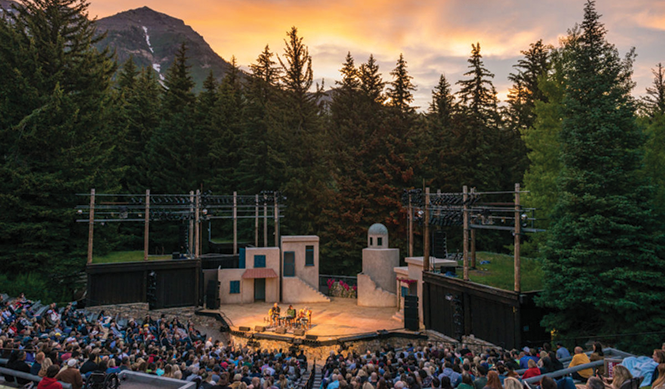 A Nashville-Utah Connection Revives
It's no secret that Utah's music scene has connections with arts and entertainment establishments all over this country, from Los Angeles and New York to Nashville, TN. That latter one particularly finds a home at the Sundance Mountain Resort's annual Bluebird Cafe Concert Series, a partnership between the Bluebird Cafe in Nashville, Nashville artists and Utah audiences that's been going on for nearly 20 years. The festival took the last year off, of course, but they're getting back to normal this summer on Friday and Saturday nights. The festival highlights the talents of some of Nashville's most famous songwriters, cornerstones of the community there who are behind much of the great music that comes out of the town. And though they may not be household names, the people they write for—like Carrie Underwood, Keith Urban and Blake Shelton—are, so concertgoers can expect familiar songs, but performed by their original creators. This year's lineup includes: Doug Johnson, Elvie Shane and a third TBA artist on July 9 and 10; Bob Dipiero and two other TBA artists on July 16 and 17; Marc Beeson, Adam Hambrick and Kelly Archer on August 20 and 21; Lance Miller, Jessi Alexander and The Warren Brothers on August 27 and 28. The Sundance series keeps the tradition of Nashville's Bluebird Cafe alive—shows are known to be reverently quiet as the songwriters play and explain the origins of each track. Tickets vary by seating arrangement: prime bench seats are $60, regular bench seats are $55 and the lawn is $50. Group and individual tickets are now both on sale, and tickets can also be got for the BBQ dinner, at $23 per adult and $20 per group. State and county health guidelines will be followed. Visit sundanceresort.com/bluebird-cafe-concert-series for info and tickets.

Davis Arts Council Brings Back Summer Music Programming
For our friends in Davis County, you'll be glad to hear that the Davis Arts Council's Free Sunday Concert Series is back for summer 2021, alongside other exciting events like their Summer Nights with the Stars shows at Kenley Amphitheater. While the latter event is of course not free, both traditions bring plenty of opportunity for engaging in music, from locals to big-timers. And we're giving you an advance heads-up, because even though the Sunday Concert Series is free, tickets are still required for entry to the event, and can be purchased starting Tuesday, May 11 at 10 a.m. (call 801-546-8575 or visit the DAC box office at 445 N. Wasatch Dr, Layton). The Free Sunday Concert Series will kick off June 6 with Mimi Valentine & The Gentleman's Club, followed in subsequent shows by artists like Ché Zuro, Jay Warren Trio and many more stretching into August. But if it's glitz and glamor you crave, they've got that covered too. Summer Nights with the Stars this year launches June 15, with an "approximation" of The Everly Brothers by Jack Skuller and Sean Altman. Other notable acts among the many include Asia (June 23), local trio GENTRI (June 28), the one and only Marie Osmond (July 10), Three Dog Night (Sept. 3) and Air Supply (Sept 30). Prices for these shows range between $10 and $90 for GA, reserved and orchestra tickets, and for the different shows. Visit davisarts.org for more info so you can snag your tickets soon. All events will follow local and state health guidelines.

The Music of Andrew Lloyd Webber at Eccles
In a coordinated celebration of music returning to Utah stages, the music of Andrew Lloyd Webber will make a special appearance at downtown SLC's Eccles Theater May 7 - 15. The London-based Really Useful Group—which is just Webber's means for licensing and promoting his productions around the world—is allowing for a special series of his compositions to be played by a stunning cast of Utah talent. For super-fans of productions like The Phantom of the Opera, Cats, Joseph and the Amazing Technicolor Dreamcoat and Jesus Christ Superstar this is big news, and for fans of Utah's classical community, it's even bigger news. Utahns tackling the sweeping classics will include the Emmy Award-winning composer Kurt Bestor, Phantom veteran Dallyn Vail Bayles, Tony Award winner Lisa Hopkins Seegmiller and Lexi Walker, who's spent time performing in other circles of the Utah classical community, including with The Piano Guys and Lindsey Stirling. And of course, an Osmond will be present in the form of David Osmond, who has over the years been the go-to man to perform the leading role in Joseph and the Amazing Technicolor Dreamcoat. While audience members are swept away by the grand music, they'll take comfort in knowing that the only real phantom in the Eccles Theater will be the dispersing spirit of COVID-19. Tickets are $45, and can be found along with showtimes at live-at-the-eccles.com, or by calling 801-355-2787.

Treefort Music Fest Swaps Spring 2020 for Fall 2021
People always say Boise and Salt Lake City have a lot in common. Besides our twin Pie Hole restaurants, Boise is also home to the Treefort Music Fest, which has long been home on its own to tons of small Utah bands over the eight years it's been running. Built to Spill, technically an Idaho property, practically feel like Utahns because they play here so often. Last year, the musical back and forth between the two cities paused, due to obvious COVID reasons that led to the cancelation of the spring 2020 festival. But with 2021 here, and late summer and fall looking safer and safer, Treefort is rushing ahead to make up for lost time, even if it means breaking with the spring tradition of the festival. In addition to its general friendliness to SLC bands, the lineup features more than 350 artists, from the well-known to the most obscure. The fest kicks off Sept. 22 - 26 with stages all over downtown Boise. Headliners include Japanese Breakfast, Calexico, The Marías, Andy Shauf, Christian Scott Atunde Adjuah, Built to Spill (unsurprisingly) and other bands from far off locales, like Tennessee and even Niger! Others on the lineup include Joshy (formerly Joshy Soul), an artist who was one of SLC's brightest until he decamped to L.A. last year to score a shiny record deal. Salt Lakers making appearances include Savage Daughters, Hoofless, The Boys Ranch, and Provo bands like Roadie and Brother. Early-bird tickets are unsurprisingly already sold out, but the remaining tickets range from $150 to $420, with payment plans available and kids' entry a whopping zero dollars. Visit treefortmusicfest.com for more info.

Song of the Week: "The Phantom of the Opera" by Andrew Lloyd Webber
You may be wondering why I'm writing about a song from a production that's mentioned already, in our little piece on the Eccles Theater performance coming up. Well, it's been a slow week of listening to nothing novel for me, besides some rainforest-y lo-fi cumbia music from Bandcamp that would be uninteresting to describe because it was only slightly interesting to listen to. What is interesting to me is that I realized today that the title track—if one calls songs from musical productions "title tracks"—of the famous musical is an exciting synthesis of contemporary-for-the-time musical tropes and operatic tradition. Punchy percussion parts and deep, intense keyboard synths march along together as a dramatic companion for a strings section that has pizazz that truly marks it as a composition that came out of the '80s. Outside of its grand, romantic '80s pop textures, freaky organ and the high soprano of Sarah Brightman make it a thrill, especially if you're not used to listening to melodramatic theater soundtracks for pleasure. Listening to it while writing about The Phantom of the Opera this week brought me back to seeing the film version as a child, and wondering why someone would fall in love with a masked man determined to shatter chandeliers and hold her captive in his underground lake/lair. Now, I'm determined to find a stage production available for viewing online, if only to enjoy this sweeping banger of a theater song performed as it's supposed to be.