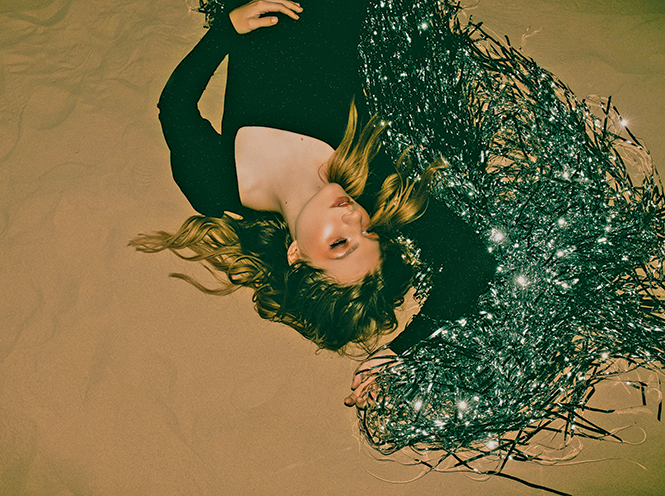 Sophie Blair's Debut EP Arteries
What happens when an ex-violist, accustomed to dabbling in the indie world, goes pop? Well, that's what Provo's Sophie Blair has done with the release of her first EP under her own name, Arteries. It's not her first time at the rodeo, since she formerly played as Nymph, and with well-known Provo acts The Moth & The Flame and Fictionist. On top of her classical music training, she's been a fixture with many other notable local acts, but what's remarkable about her now is her new project: herself. Effortlessly shifting her emotive lyricism from the more atmospheric, viola-filled Nymph releases, her new work is all sensual glitter and gutted honesty. Picked up by past collaborator and Provo pillar Mindy Gledhill's new label Wonderwild Records and paired with Grammy nominated producer Nate Pyfer, Blair's whimsical roots have been respun into a rather haunting and distinctive pop EP in Arteries, released at the end of October. A new kind of Blair, sharper and more mature, gets to shine here, specifically on singles like "Don't Be Like That!," a track that recalls good old-fashioned indie pop, like Sky Ferreira in her "Lost In My Bedroom" days. The other stand-out is "AIR I BREATHE," a perfectly-paced, softly grooving track carried by the breathless themes of new love Blair so catchily narrates: "I'm in love with you and I tell you so much it must be / hard not roll your eyes these days when you talk to me / it's fine you're just the air I breathe." There are more dramatic moments to counter these perfect pop songs, like the title track and opener, which though it smolders compellingly with glitchy, swirling synths and gasped lyrics about maybe-heartbreak, feels a bit self-indulgent, whereas the similarly-paced "Drive" leaves an impression of deeper reflection among its swirling string parts. Moments of pause are hard to dwell on, though, when most of the EP is so undeniably good. With songs like these under her belt, the future seems bright for Sophie Blair, pop star. Stream it wherever you stream.

RSD Black Friday with Lavender Vinyl
Ogden's Lavender Vinyl was one of a few local record shops to participate in the pageantry and tradition of Record Store Day—and during COVID times, that meant splitting the event up into three different drop days to ward off unmanageable crowds thronging into tiny shops. That's also going to be the case with Record Store Day's Black Friday sales, which Lavender Vinyl is participating in, too. The push towards Black Friday sales is one meant to scoop small businesses—and, in particular, record stores—into mainstream holiday shopping habits, at a time when there's no better time to support small businesses as one starts to holiday shop. Lavender Vinyl's Black Friday event will hopefully be part of this shift from big businesses getting the lion's share of shoppers, when small businesses work so hard to serve the communities they're a part of. The event will have just as many COVID-conscious rules as their past Record Store Day drops, including ticketing measures that start at 9 a.m. on Friday, Nov. 27. Tickets replace the need to line-up, and customers will be called in the order of their ticket purchase, then allowed to shop the outdoor tent full of RSD Black Friday special releases from 10 a.m., or the shop and all its inventory after noon, with mandatory masks. Shoppers will need to come with a mind for what they're looking for, because Lavender Vinyl is only allowing five minutes of shopping per customer of their exclusive releases, with four customers at a time allowed under the tent—this isn't to be stingy, but to allow everyone to have a chance to do their shopping quickly, without loitering or spreading germs. If you missed Record Store Day, want to do some Black Friday shopping that's not as crowded (and dangerous) as bigger retailers will surely be, or just want to support a cool, small local business doing what they can to keep vinyl love alive, don't miss Black Friday at Lavender Vinyl. Follow them at facebook.com/lavendervinyl for more info.

Cardboard Club Releases EP Hemlock
If you're feeling a little bored stiff with whatever you've been listening to, take a spin with the fantastical weirdo indie pop of Cardboard Club. They've been plying their craft for several years now, including a string of singles released as On Three! in 2018. At that time signaling a deference for early 20-teens pop like that of Two Door Cinema Club, the group has subsequently reached new heights of songwriting and style all their own with the October release of the new EP Hemlock. At only four songs, the record calls to mind, strangely, some particularly chaotic Mario Kart tracks—although that might just be because tracks like "Sun Bleached Topaz" feature sound effects one might find in the game, like being dunked under water, before returning to the sunny acoustic riffs and cartoonish "ooh-wap"-ing in the background. Other tracks also feature synth notes that sound a helluva lot like they were ripped from video games, with many a victorious pling! bouncing around. Vocalist Christian Banner is the cherry on top of their mad dash way of doing things, blowing through the lyrics at speed with self-assured twee charm. The collection of songs is something of a toned-down, beached-out version of the singles they released earlier this year—"Show Love" and "Take Your Shot"—which seem to be experiments in playing complicated songs really fast. Tracks like "Omelas" balance Cardboard Club's chip-tune alliances with funky basslines, and more of that clever, plucky beachified guitar. Altogether, the EP is a melee of varying influences, a sugar rush of energy and unchecked but well-constructed mayhem—like the moment in Candy Crush when the row comes together and bursts. For fans of the campy and the zany, Hemlock is an album for you, and can be streamed on Spotify or bought at cardboard-club.bandcamp.com.

Talia Keys Joins KRCL
Local musicians have been getting creative in many ways this year, where opportunities to gig out are rare if you're willing to play live shows, and nonexistent if you aren't. So, many have turned to live-stream performances, interacting with followers and fans in new and exciting ways; still others have turned inwards and crafted or finished music projects, releasing singles, EPs and even full albums in the time since everything music-wise changed so drastically. Juggling many things at once isn't a new task for local scene staple Talia Keys, though. The multi-instrumentalist funk 'n' soul 'n' rock 'n' roll queen usually has a lot on her plate—besides performing with projects like Talia Keys & The Love, she also works as Music Director for SLC's Rock Camp, a now-established music learning program tailored for girls, and transgender or gender-expansive youth, who might otherwise be dissuaded from taking on music as a hobby due to the masculine tradition of rock 'n' roll. Now, the ambitious artist is the newest addition to the lineup of knowledgeable DJs at KRCL. Every Saturday, Keys will be using her midnight to 2 a.m. slot to bring night-owl listeners a whirlwind of just about every kind of music, which might surprise folks used to hearing the specific and personal blend of genres that shows up in her own music. She'll be whipping pop, old school hip hop, reggae, funk, folk and jam bands all up together for her unique show, and special guests will find their way on the air, too. It's not often that KRCL welcomes a new DJ to their stable of reliable talents, let alone by way of an already famous local rocker. So the next weekend you're up late or stuck at home with the quarantine scaries, tune into We're Here with Talia Keys at midnight Saturdays on krcl.org or 90.9 FM.

More Holiday Deals and Ideas
Not all local record stores are hitching to the Record Store Day ride, and are instead planning to host their own small sales for the holiday of consumerism—or gift-giving, whatever it is you and yours call it amongst yourselves. One of the shops City Weekly reached out to about Black Friday shenanigans expressed that Record Store Day-affiliated sales can actually be difficult for some small shops to work with, since you can't return the stock that you don't sell. Luckily, programs like the Shop in Utah grant have allowed smaller shops like Peasantries & Pleasantries to run their own sales, which Peasantries has been doing for a while now, with 20% off on a bunch of stock, a sale which will run until the $500 discount limit the shop has been allotted runs out. Peasantries & Pleasantries can be shopped by appointment from Tuesday to Saturday, noon to 5 p.m., and appointments can be arranged by DM or by contact info available on Instagram @pleasantlyslc. Among stores running specific offers for Black Friday, Albatross Recordings and Ephemera, too, is offering a 15% off sale, and are otherwise open at their storefront at Boozetique from Thursday to Saturday. Folks can keep up with Albatross on Instagram @albatrossrecslc. Diabolical Records will also be open as usual, and it's worth keeping an eye on their Instagram @diabolicalslc for heads up on their drop day collaborations, like their Dianormical deal which finds them pairing their records with Normal Ice Cream goodies—a combo that would make for a pretty killer gift idea for the sweet-tooth-having vinyl head in your life. So, there are plenty of options for getting a jump start on your gift shopping, while both supporting local businesses and avoiding the craze at big box stores. Hop to it, and be safe!