Mdou Moctar at The Urban Lounge
You think DIY music is hard to do here in the wide-open, interstate-connected United States? Try touring DIY venues worldwide when your home-base is a rural village in Niger. That's how Mdou Moctar came up into the global music scene, though he did achieve viral status in West Africa in the Tuareg language remake of Purple Rain, titled Akounak Tedalat Taha Tazoughai, which Moctar wrote, produced and starred in. Taking inspiration from the six-string technique of Eddie Van Halen, Moctar has developed his own unique style of guitar playing, and with the success of 2019 albums like Ilana: The Creator, he's earned the nickname "Jimi Hendrix of the Sahara." His music pulls from contemporary Saharan aesthetics while establishing a distinctly fresh psychedelic sheen all its own, which shines citrus-bright and sweet on his newest effort, Afrique Victime—also the band's Matador Records debut. Like any great rock album, it focuses on themes like love, but also on topics including religion, women's rights, inequality and West Africa's exploitation on the global colonial stage. Moctar and his band stop into The Urban Lounge on Wednesday, Sept. 22 as part of a lengthy North American and European tour, one that's long overdue for the always busy and jet-setting band—who still find themselves based out of Moctar's modest hometown of Agadez. The show starts at 7 p.m., is 21+, and tickets are $16. Visit theurbanloungeslc.com for tickets and more info.

Edison Street's New Street Festival
For the last few years, Edison Street has been, in stops and starts, a great place to spend a night out on the town. Diabolical Records used to host shows in their tiny shop regularly, crowds of which would spill out into the street; next door, Secret Top Secret would sometimes have parties complete with a half-pipe on which bands played at least once. Well, with the addition of some new businesses on the street like Curry Up Now, Roc Taco and Mortar & Pestle, plus the influence of new local music conduits like UPHERE! Records, there's more to see and do on Edison Street than ever. Diabolical Records's new fusion-inspired neighbor Roc Taco is presenting a new all-day Edison Street Festival, complete with food from the local businesses, plus local artists, crafts and of course, music. From 11 a.m. to 10 p.m. on Saturday, Sept. 18, the festival will feature music kicking off at 12:30 p.m. with local band hi again, followed by Savage Daughters, Toothpicks and The Boys Ranch in the afternoon. At 4:30 p.m., Worlds Worst welcomes the evening, and are followed by Backhand, Dad Bod, Sculpture Club and the final band Lord Vox, before the rest of the night is taken over by a DJ set from 08gracee. The fest happens across the street from Roc Taco on Edison Street, presumably in the parking lot that is chronically vacant. For more updates and a schedule, visit @roc.taco on Instagram. 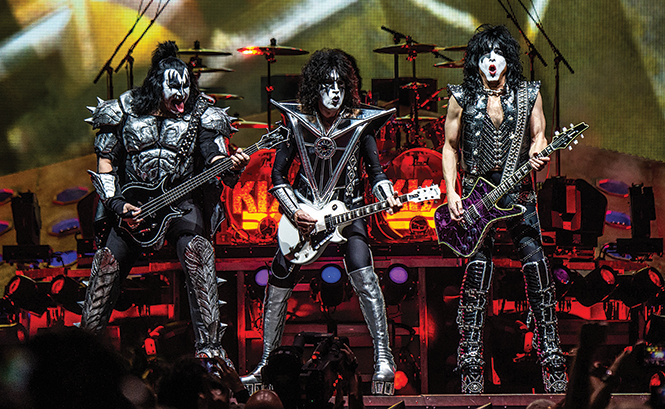 KISS End of the Road Tour Comes to SLC
The legendary glam rock band KISS are at the end of the road—or at least that's what they're saying about their latest tour. The End of the Road Tour started in 2019 and was interrupted in 2020 by the pandemic with mass re-schedulings, but has now resumed in 2021 (albeit interrupted by COVID diagnoses for band members Paul Stanley and Gene Simmons). The Salt Lake City date was one of those that had to be pushed from its original slot this time last year. All that time throws into question whether the tour will ever really end, especially with scheduled dates that extend into 2022. Having trotted the globe, as world famous rock stars are wont to do, KISS is stopping back here in America, visiting the USANA Amphitheater on Wednesday, Sept. 22. While out on this tour, they've obviously played all the hits, while also wowing fans by breaking stage pyrotechnics records to go alongside said hits. Unless they do another lap around the globe before calling it quits, this is your last chance to see an iconic band like KISS—in your own backyard at least. Tickets are still widely available, and they range from $68 to $1,472. Tickets bought for the 2020 date are valid for this one. More info can be found at saltlakeamphitheater.com.

Gather Hear Tour Concludes at Alliance Theater
A Boston-based classical concert pianist has embarked on an unusual journey, one that involves a whole piano following her on her cross-country travels. Miki Sawada is this pianist, and her goal is to take classical piano music outside of the barrier of the concert hall, and insert it into more accessible community spaces in both urban and rural environments—and to do that in all 50 states. After touring all around rural Utah through the latter part of August and early September, Sawada is finally finishing in Salt Lake City, with support from WESTAF TourWest and Salt Lake City Arts Council. The Mundi Project will present the last three of the 16 Utah events. Her last rural performance will be in Price at the Price City Peace Garden on Sept. 16 at 7 p.m., and the last Mundi Project presented show here in Salt Lake City will be on Saturday, Sept. 18 at the Alliance Theater at Trolley Square at 7 p.m. Both of these events are free, and listeners can expect to hear excerpts from Sawada's electro-acoustic debut album A Kind of Mirror, which was written for another Gather Hear tour in West Virginia in 2018. Sawada will also perform African-American spirituals by Samuel Coleridge-Taylor, pieces by Franz Liszt and a piece written for the tour by the University of Utah composer Elisabet Curbelo. To learn more about Sawada's music and her journey, and to keep track of future Gather Hear tour dates, visit gatherhear.com/utah.

Ben Brinton at Marmalade Jam Fest
Partaking of the homemade jam that's in competition at the Marmalade Jam Fest isn't the only way to jam out if you stop into this neighborhood fest. Held at Mountain West Cider's The Garten for the fourth year in a row on Saturday, Sept. 18 and Sunday, Sept. 19, there's much to entertain besides pursuing the offerings of the fall fruit preserves competition. A celebration of the fruits that historically grow on the trees of the aptly named Marmalade neighborhood, this annual festival will also include beverages by Red Rock Brewing and most definitely Mountain West Cider, and music by locals to enjoy while sipping and munching. Among the performers will be local solo artist Ben Brinton, kicking things off at 11 a.m. on Sunday, performing songs from his 2020 album Pocket Octavez, which is full of tongue and cheek, warm-hearted and often humorous original songs. His acoustics and melodies build on '90s pop-rock traditions like that of the Gin Blossoms or the Spin Doctors, and are perfect for a sunny late summer day dealing in sweets. Brinton's set is also accompanied by ASL interpretation, an accessibility move not common on the local show circuit, but maybe one that should be. Other folks at the fest include Picky Out The Stingers later in the day, and more TBA. Marmalade Jam Fest is free, all ages, and more info can be found at facebook.com/TheMarmaladeJamFest.