Perfume Genius and Hand Habits at Metro Music Hall, Side Door Launches Back To Live, Lost Dog Street Band at Soundwell, and more. 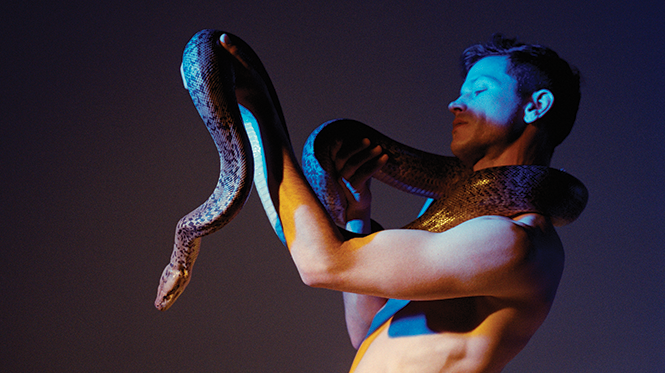 Perfume Genius and Hand Habits at Metro Music Hall
This Tuesday, Sept. 7, head over to Metro Music Hall to catch a long-overdue tour from one of modern indie pop's most iconoclastic figures. Perfume Genius—AKA Mike Hadreas—has made a vibrant career for himself over the last decade, gaining the kind of fame that made him a household name in indie crowds with albums like 2014's Too Bright, and songs like the wild, defiant "Queen," a hit song inspired by "gay panic" that came out a year before gay marriage was legalized in the U.S. Hadreas's often heavy emotional work—delivered through thin vocals and dangerously glinting, deliberately-paced instrumentals with a heavy reliance on sonorous piano—continued on 2017's No Shape, which delivered hits like "Slip Away" that would keep Hadreas fresh in everyone's minds until the 2020 release of Set My Heart On Fire Immediately. Perhaps his most approachable full album to date, dreaminess still takes up a chunk of space on tracks like opener "Whole Life" and "Leave," but new grit like that in the guitar-crunched "Describe" or the urgent, dark wave-ish pulse of "Your Body Changes Everything" add dimension, making the album deeply texturally interesting, as much as it's often just really catchy. Hadreas will finally be touring this wonderful album, and with support from fellow indie pillar Hand Habits. The show has doors at 7 p.m., is $28 and 21+. Visit metromusichall.com for tickets and more info.

Side Door Launches Back To Live
The 2017-launched Side Door is something of a mix of both Airbnb and Tinder; the platform focuses on connecting artists who want to play shows with people who want to host them, at venues outside the norm and beyond the usual tour routes. It's also different from SoFar Sounds—another more established space-sharing, house show-modeled concert platform that relies on volunteer hosts—because Side Door makes available resources for multi-platform show promotion, and automates ticketing to put money right in the pockets of artists. Side Door was co-founded by an actual musician, too. JUNO award-winning musician Dan Mangan came up in a DIY scene where he relied on spreadsheets to keep track of friendly hosts on his tour routes, an experience that supplied the inspiration for Side Door's mission to connect artists with accessible and well-paying opportunities to play shows, wherever they are. The altruistic mission is even more so with the addition of their new Back To Live with Side Door subsidy program, where hosts and artists can apply for up to $500 in assistance to put on an event, or $100 for online events—because it takes a lot to put on a killer house show, especially if one is doing it for the first time with no prior experience or resources. In-person, online or hybrid shows alike are all applicable shows to produce with Side Door, a dynamic born of the pandemic and the isolation of artists stuck at home, and of 2021's hesitant return to real-life shows. If visiting big venues makes you nervous as an audience member or artist, take things into your own hands and plan your own intimate show. Visit sidedooraccess.com for more info on hosting, playing and applying for the subsidy.

Lost Dog Street Band at Soundwell
Some real street-wise wanderers and their travel-weary music will be gracing the walls of Soundwell this Saturday, Sept. 4. The Lost Dog Street Band was formed in 2010 by guitarist and singer Benjamin Tod and fiddler Ashley Mae, life partners who met when Tod was a wayward train-hopping teen stopped in Mae's Nashville punk scene stomping grounds. Since those distant days, though, the two have rounded their music group out with Jeff Loops of the roots band Deep Chatham. They've also made a name for themselves in the bluegrass and folk world with crowdfunded releases, one of which, Weight of a Trigger, ended up snagging a number five spot on the Billboard Bluegrass Albums chart in 2019. The album ponders the experiences of outlaws—which Tod is, in several states, a remnant of his days as a ne'er-do-well wandering kid—while drawing from influences like Appalachian folk and old-timey country blues. While they draw on time-worn themes and the warm tones of their humble genre, Tod's distinctive twang sets them immediately apart—there is a plain emotiveness to it, a slant that side-steps place, just like he does in life. They'll be joined at Soundwell by Matt Heckler. The show starts at 7:30 p.m., and while tables are sold out, GA tickets are still available for $15. This is a 21+ show, and tickets can be found at soundwellslc.com

Jonas Brothers at USANA Amphitheatre
While the Remember This Tour rolling through West Valley City this Sunday, Sept. 3 is being marketed as an experience where every audience member will be a screaming teenage girl, there is also sure to be a lot of nostalgic young adults in the crowd. While the Jonas Brothers have lately found themselves churning out adult hits and earning the contemporary relevancy that comes with them—thanks to tracks like 2019's reggae-infused "Only Human," and a 2021 single collab with Marshmello, "Leave Before You Love Me"—they also have a reputation with older fans that'll draw a crowd. First finding their way to fame with Disney Channel-affiliated releases and movies like Camp Rock and its sequel, The Jonas Brothers became Disney's own homegrown pop heartthrobs, winning the hearts of kids, tweens and teens across the world throughout the mid-aughts. Fast-forward to now, and not only are their early songs—2006's "Year 3000," 2007's "S.O.S" and 2008's "Burnin' Up" to name a few—still bangers for those now-grown up fans, they've got a whole new generation of fans raised up on their newer hits to join the fan club. So whether you're a late 20-something or have some young ones of your own who can't wait to scream along to the iconic tunes of the Jo' Bros, visit saltlakeamphitheater.com for more info on how to attend. Tickets range from $29 - $5,500, and the show is all-ages.

Rebelution Brings the Good Vibes
We could all use a hearty dose of some positive energy, and that's what Rebelution and their purely easy, breezy, beach-infused brand of reggae are bringing to Utah when they stop in at Rio Tinto on Thursday, Sept. 2 on their Good Vibes Summer Tour. Rebelution embodies the spirit of reggae, a genre that specializes in the teasing out of all good vibes, from the spiritual to the simple, into an always-palatable sound. While here in the mountains we are far from the islands where reggae was born, Utah has a strong reggae fanbase, and Rebelution is no stranger to us, or us to them. What will be new to fans at the Rio Tinto show, though, is their fresh album, the 2021-released In the Moment. The album finds the band exploring some complexities in life's challenges, as in the song "Heavy as Lead," which asks questions like, "how do we get through this?" and answers "life's real but that's what we live for / come heavy as lead / won't let nobody ever take me down / hold steady my head when the world is crumbling all around / no pressure no stress." Drawing on the classic reggae dedication to peace and chill to get through hard times? Sounds about right. Rebelution will be joined with performances by Kabaka Pyramid, Keznmadi and DJ Mackie. Tickets range from $37.50 - $102.50, doors are at 4:30 p.m. and the show is all-ages. Visit rebelutionmusic.com for tickets and info.