Oktoberfest Must Go On
While many autumn traditions have been lost for this year, some smaller scale operations are keeping the spirit of the season alive. In the case of Mountain West Hard Cider, that means going forward with their yearly take on the seasonal tradition of Oktoberfest with their 4th West Oktoberfest. The event—which will go down at their German style biergarten, The Garten—involves much more cider than would be found at a typical beer-centric Oktoberfest event. This year it will also involve less roaming around with sloshing mugs of cider (or Red Rock brews, which are often featured at the festival for all the beer people to partake of). Table service is the new mug refill, though VIP ticket holders do get their own commemorative mugs—in addition to Oktoberfest gift packs, drink vouchers and shady tables close to the music—to take home. From tables, it might also be easier for both GA and VIP attendees to enjoy the entertainment, which will run through both Saturday, Sept. 25 and Sunday, Sept. 26. First will be Michelle Matyja, Bill Heaner and Two Old Guys on Saturday, followed by Brooke Mackintosh, Eric Sisler and The Proper Way on Sunday. While Mackintosh, The Proper Way and Two Old Guys are common names on the bar and restaurant circuits, the others are well worth seeing, too. The fest runs each day from 10:30 a.m. to 10 p.m., with music starting at noon and running on and off til the end of the day. While entry is free, VIP tickets allow attendees to skip the line, running $15 a head for groups between 5 and 10, and can be found at
facebook.com/MountainWestHardCider.

SoFar Sounds Free Streams
Last year, City Weekly profiled the entrance of SoFar sounds into SLC. The company has been around throughout the 20-teens, disrupting and re-inventing what a "house show" looks like—or rather, monetizing the intimate model and purporting to deliver a flawless live concert experience. So, the turn towards free live-streamed shows now regularly up on their site has been an interesting one, but no doubt is now a comforting ritual for some who miss the immediacy of live entertainment. Since the pandemic began, SoFar has been doing its small part to help out-of-work artists who used to make use of their platform, setting up a donation pool that seeks to give those artists $250 each as a small token of aid in these financially trying times. Meanwhile, they've opened up and speedily updated their platform to one that makes music an accessible constant, with features like their Listening Room (a pun and re-imagining of their living room shows of the past?). I dropped in on a live performance by the Buenos Aires-based duo Duratierra while writing this, where they unspun some minimalist tunes with the spare pair of guitar and soft, quivery vibratos from the singer Micaela Vita. Below the live video block is a tempting green button to donate to the artists playing, and below that a list of upcoming live streams of the day or week. The SoFar blog is also quite the resource for keeping up with all music news happening within the timeframe of the pandemic. All of these resources can be found at sofarsounds.com 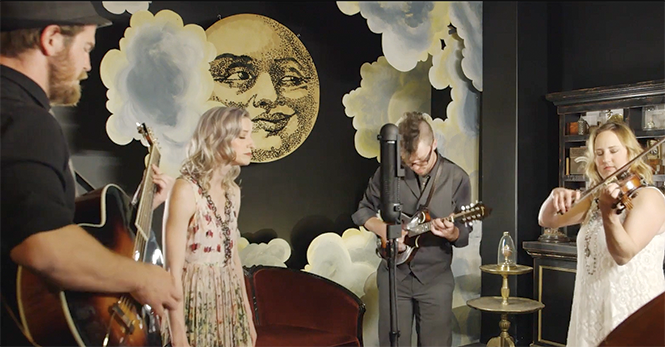 Early Autumn in Urban Lounge's Backyard
What once were summertime shindigs behind the Urban Lounge are soldiering on into fall, and this week is packed with local goods. The pivot to outdoor fall hangs isn't necessarily a bad idea, especially since on any crowded night at Urban Lounge pre-Corona, the back patio was usually packed no matter how cold the weather was. So, if a crisp night out sounds good to you, regard these weekday and weekend-adjacent offerings. First on Thursday, Sept. 24, there's a $10 show featuring Heavy Rollers, with their chaotic, blues-informed style of heavy rock 'n' roll, alongside openers The Medicine Company and The Fervors. The former matches the Heavy Rollers in owing their sound to folksy, blues-brewers of the past, while The Fervor's atmospheric psych rock gives a little contrast. Next up on Friday, Sept. 25 and Saturday, Sept. 26 is a double-header of Pixie and the Partygrass Boys, with tickets bumped up to $20, likely because of this band's good-time dependability and local prestige. An SLC stalwart, Pixie and her boys offer up feel-good folk Americana tunes with more consistency than many folks around. Complete with spirited fiddles and delightful harmonies, this is one band that can stand readily on their own. They'll be doing just that on both days of their residency behind Urban, and they're well worth seeing if you haven't yet. All shows run 6 p.m. - 10 p.m., with hang time allowed for an hour after the show—the perfect opportunity to suck down one more frosty beer before calling it a night. Visit facebook.com/UrbanLoungeSLC for the event pages and more info.

Record Store Day #2 Hits Lavender Records
If you missed the start of Record Store Day's staggered solution to Corona (i.e. the danger of being in enclosed spaces together, touching the same sticky record jackets), then have no fear: The second drop day is here. Ogden's Lavender Records is providing the goods this Saturday, Sept. 26. Just like any shop that's doing Record Store Day, they've got both virus concerns and RSD's own rules to navigate around, meaning that they've got quite the system in place for those who want to shop, whether in person or online. The shop will start handing out tickets at 8 a.m., which will function as one's "spot in line;" at 10 a.m., four at a time are allowed to enter the shop according to their line-up number. Tents outside will act both as a checkpoint (but like, in a fun way, not a warzone way) and a sidewalk sale. At 11 a.m., those who have to or want to shop from home can start calling in to the shop or placing orders over Instagram, though that too will require some competition. Finally, at noon, the shop opens up to the general public for folks to peruse whatever's left, and maybe grab some non-exclusive merch while they're at it. Though all these rules may seem like a lot, they're all in the true spirit of Record Store Day and the reason it was originally founded—to keep records accessible to and exciting for people, and to provide support to small, indie record stores all over the world. Now more than ever, art and music are essential to getting by in the day-to-day of this new world, and Record Store Day's a good time to pay it back to folks like Lavender Vinyl. Follow them on facebook.com/lavendervinyl to keep up with updates on the shop and the next drop day on Oct. 24.

Los Vii Releases Breezy Debut EP
If you missed your summertime vacation, SLC's Los Vii has already crafted memories of it with his melancholic and hazy sonic palette—like a dream that never really happened, because it didn't. Los Vii is Carlos Viitanen Corberan, an SLC-based native Spaniard who seems to have a pretty steady hold on all things beachy, considering he's living in a land-locked space now. His debut EP Everyone, Asleep is the kind of dream pop that dabbles in soft, frivolous, goofy psychedelia, such as Mild High Club, while calling to mind the tender, unembarrassed sap of acts like Sean Nicholas Savage. His vocals are oh-so Tame Impala, but that's not a knock against him. Everyone, Asleep is surprisingly strong for a first release, even taking into account the fairly good singles he's been releasing since 2019, such as "Wake Up Call" and "One Hundred Lives." The EP, at six songs, is cohesive in its production, which is weedy and intricate, interwoven with warm synths and crackling samples of people speaking, recalling very closely at times the sound-bytes like those on Men I Trust's campy 2019 album Oncle Jazz. The EP is, despite its general beachiness—on "On the Mind," a sample of water rushes through—a very inside-facing album. And that's not just by way of its title, or its cover art of a house lit up at dusk, but with homebody lyrics like "there's no going out tonight / it's warm inside and it feels so nice / ... made my mind up, won't think twice." It speaks to a time, certainly, when staying in could be a rebellious act of self-care in an extrovert-focused world. Now, most folks miss the worlds outside their windows, but this EP is a comforting reminder that anywhere is dreamy if you've got enough sparkly synths to keep you company. Stream it on Spotify, and follow @losvii on Instagram to keep up with the talented local.