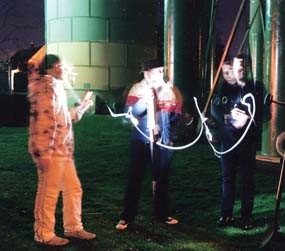 “Gold Sunset,” off CarCrashLander’s self-titled debut, is in many respects the sound of taking off, taking flight and floating outside the ozone. The adventure starts out well enough, with warm, lush piano, vibes and horns propelling a dreamlike cruise above the ozone. Halfway through the opening track, things take a melancholy turn. Crash! Suddenly the passengers of this extraterrestrial cruise are plunged into darkness, separated by vast, unexplored territory. “This isn’t a coma. You’re wide awake,” the haunting vocals repeat over blistering electronic noise. Remaining tracks are equally heavy, exploring not just outer space effects but also the space between each essential chord. CarCrashLander’s Cory Gray might be best known as a former member of Desert City Soundtrack and backing player in Norfolk & Western/The Decemberists, but you’d be wise to keep appraised of his personal project. New album Mountains On Our Backs traverses even groovier terrain. Slowtrain, 221 E. Broadway, 9 p.m. All-ages. Info: 364-2611


JAMES SHOOK CD RELEASE
James Shook is a longtime fixture on Salt Lake City’s reggae scene, perhaps most recognizable for his role in the formidable dub rhythm section behind Afro Omega, One Punch and Dub Shack Band. When he’s not backing artists like Miss Omega (who recently returned from a brief hiatus and is busy polishing the band’s next full-length release), Shook fronts a solo project that reveals a set of pipes reminiscent of Steel Pulse’s David Hinds. His new LP Rising is super chill but also incredibly tight—a credit to a group that works overtime and never breaks a sweat. Bar Deluxe, 666 S. State, 10 p.m. Info: 521-5255

Sunday 9.28
NIGHT OF THE IMMORTALS
Created for the scene, by the scene, Salt Lake City’s annual Dark Arts Festival celebrates the underground community of gothic, industrial, punk and electronic musicians, visual artists, dancers and unique spirits who stand tall—and fashionably—against mainstream mediocrity. But this cherished event isn’t cheap, and as a nonprofit organization, the Dark Arts Foundation needs all the support it can get. Tonight, pony up the funds for a good cause and enjoy performances by darkwave sensations Cruxshadows, industrial/electronic groups Ayria and I:Scintilla, plus gothic belly-dancing troupe Obscure Mudra, an art gallery and costume contest. Proceeds benefit DAF 2009. Area 51, 451 S. 400 West, 6 p.m. Info: DarkArtsFestival.com

Monday 9.29
BLUESAPALOOZA
Gluttony might be one of the seven deadly sins, but come on—does it really belong in the company of murder? How about we bend the rules a little for Bluesapalooza? The annual orgy of all-you-can-eat BBQ and more music than any sane person can handle. Tonight’s the perfect time to go nuts, though, with performances by local blues artists Roby and Ritchie Kap, The Ides of Soul featuring Joe McQueen, Shades of Gray featuring Jesse Luckett, and The Legendary Porch Founders featuring Korene Greenwood and independent radio man Bad Brad Wheeler. He’ll also be broadcasting live between bites of cornbread and ribs to help generate funds for KRCL 90.9. Pat’s Barbecue, 155 W. Commonwealth, 7 p.m. All-ages. Info: 484-5963