by Randy Harward and Lee Zimmerman

THURSDAY-SATURDAY 3/2-4
Pure Prairie League
Had they done nothing more than record the '70s radio staple "Amie," Pure Prairie League would still be guaranteed enduring immortality. Overshadowed at the time by such like-minded country rock combos as Poco, The Flying Burrito Brothers and Nitty Gritty Dirt Band, they can nevertheless claim a pedigree that puts them at the forefront of the emerging Americana movement, well before the term was conceived. Indeed, considering their list of famous associates—like country superstar Vince Gill, country legend Emmylou Harris, Eagles' Don Felder and painter Norman Rockwell (whose art, a play on his Saturday Evening Post covers, adorns PPL's debut album—also the first appearance of their iconic, poncho-clad bandido mascot)—it's clearly time they were recognized for more than that one simple, if simply beautiful, song. Now in their fifth decade, the band soldiers on with founding member John David Call and longtime bassist Mike Reilly still at the helm. And while they've undoubtedly influenced scores of rootsy rockers, PPL clearly remains in a league all their own. (Lee Zimmerman) The Egyptian Theatre, 328 Main, Park City, 8 p.m., $23-$50, egyptiantheatrecompany.org

FRIDAY 3/3
Tennis, Hoops
Tennis, anyone? No, not the sport—the Denver-based duo consisting of Patrick Riley and Alaina Moore, music makers who bill themselves with a sports moniker best identified with fuzzy balls, Wimbledon and superstar sisters Venus and Serena Williams. However, theirs is no racket (sorry) but rather a giddy, bucolic series of melodious, '70s AM-pop and soul-influenced songs on their new long-player, Yours Conditionally (Mutually Detrimental), which hits the streets one week after their Salt Lake City gig. Four albums into their career, the pair has been accorded all kinds of kudos and spots at the top of the charts, not to mention the full gamut of late-night television appearances. The song titles included on the new disc are especially expressive—"My Emotions Are Blinding," "Please Don't Ruin This for Me," "In the Morning I'll Be Better"—bringing to mind an unlikely mix of Belle and Sebastian twee, David Vandervelde's sunny amber-toned pop-smithing, The Smiths' melancholia and Cocteau Twins' cinematic dream pop. As a result, Tennis scores through a heady mix of angst and enthusiasm. Openers Hoops come from Tennis' former label, Fat Possum—known for releasing only the good stuff. The four-piece Indiana band shares some of the same retro-mindedness as their tourmates, perhaps with more of a Brit-influenced power-pop bent. (LZ) The State Room, 638 S. State, 9 p.m., $18, 21+, thestateroomslc.com 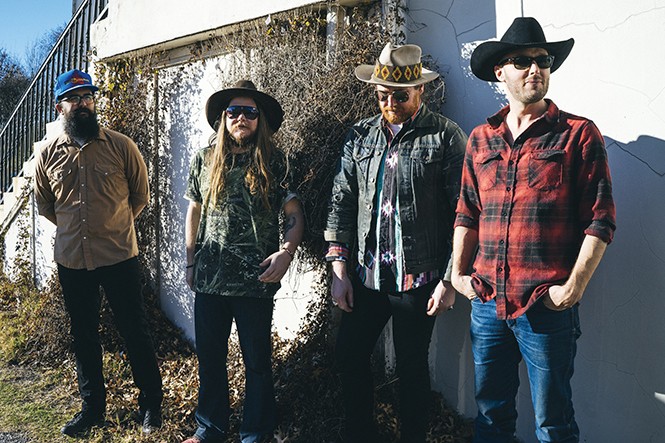 SATURDAY 3/4
The Cadillac Three, Quaker City Night Hawks
It's easy to poke fun at rednecks, but some of that Duck Dynasty life ain't so bad. I mean, they can keep the religion, jingoism, bigotry and hunting. I'm talkin' about dirty, dangerous, hold-my-beer fun. Like the bottle rocket-and-Roman candle war I had in a rural Idaho cow pasture, where it was pitch-dark and the only light came from Bics and blasts. That's a good-time adrenalin rush for sure, especially if you're turd-phobic and the battlefield is littered with cowpies and dipshits. (Don't try this at home, children and easily led adults.) Both of these bands remind me of that night. The Cadillac Three's unabashed redneck-ness is more Waylon than Toby, and their country-rock songs celebrate their heritage and use words like "Dixie"—but I haven't spotted a Confederate flag in any of their vids and pics, so I won't put sarcastic quotation marks around heritage. As for Texas quintet the Quaker City Night Hawks, I don't go for none of that Amish mess. But I do love me some oatmeal—and reallyreallyreally love El Astronauta (Lightning Rod), the Texas band's latest album of trippy Southern rock/blues informed by ZZ Top, Harper Lee, Heavy Metal, Mexico, spaceships, Mark Twain, the '70s, Doug Sahm/Sir Douglas Quintet and possibly Dr. Timothy Leary. The SL County Debbilbabies open. Just kiddin'—they don't exist. Yet. (RH) The Depot, 400 W. South Temple, 7 p.m., $18 presale, $20 day of show, depotslc.com

SUNDAY 3/5
Martin Sexton, Brothers McCann
An exceptional guitarist with a penchant for folk finesse and bluesy ballads—and possessed of an incredibly versatile and expressive voice—Martin Sexton is also an adept songwriter, boasting a 30-year career that's garnered him a small but devoted following. After Sexton acquired his first guitar at age 14, he was a busker in Boston. Three years later, he issued a collection of demos titled The Journey on 8-track tapes, selling 15,000 copies—an especially remarkable feat for that time. From that point on, Sexton's career quickly accelerated, and he earned rave reviews and even a nod from the National Academy of Songwriters, which named him their Artist of the Year in 1994. His latest effort, 2015's Mixtape of the Open Road—released via his own Kitchen Table label—reflects a varied musical travelogue that often accompanies his incessant touring, all reflecting his remarkable diversity. For their part, opening act Brothers McAnn derive their sound from the same Northeastern environs. Their lush, supple blend of three-way harmonies, chiming acoustic guitars and sheer serendipity is simple and uncomplicated, predicated on coffeehouse ambiance. Flannel shirts and Birkenstocks not required, but you can wear them if you like. (LZ) Park City Live, 427 Main, Park City, 8 p.m., $25-$40, 21+, parkcitylive.net

Tuesday 3/7
Red Bennies, Brain Bagz, Dark Lord, Muzzle Tung
Not enough local bands record live albums. Sure, you can find live recordings, but how many proper live albums—where a band tries to capture their very best performance, or at least a collection of stellar live moments, for posterity? If you're Red Bennies (est. 1994), and you have a reputation for bitchin' shows, then that's an outstanding idea—and it's already happening. For two years, head-Benny-in-charge David Payne has been recording the trio's performances with what he calls "a unique process that might be interesting to read about, if not too nerdy." Knowing Payne's a tinkerer, it's definitely extra-nerdy and super-geeky—but also cool as hell. He's using an 8-track that records to SD cards, special flat mics that can be placed on the floor instead of on stands near his own handmade, hyperdirectional Space Invader speaker cabinets "that run multiple instruments but send separated line-outs to the recorder." Payne is calling the project Dai Ou Jou, which he says translates loosely as "peaceful death." Does that mean this might be Red Bennies' swan song? That's hard to imagine, since guys like Payne would wither if they didn't have irons in the fire. But then, Payne has the lounge band Jazz Jaguars, nerdcore duo Jade Knight/Lord British and a slew of others to keep him busy if he decided to retire Red Bennies after its long and distinguished run. "No retirement," he texts. "It works, though, in case we die first." Maybe they should call the album Live Before Death. (Randy Harward) The Urban Lounge, 241 S. 500 East, 8 p.m., free, 21+, theurbanloungeslc.com

WEDNESDAY 3/8
Slick Velveteens (tour sendoff), Penrose, The Artificial Flower Company, Dealin' In Dirt
Comin' outta Bountiful like jack Mormons and refinery wind, with a name that sounds like a creepy porn site, Slick Velveteens are headin' out on their first tour. That's not meant as an insult. But the foursome does appear to be in development and, since they haven't really recorded yet, this tour is probably an exercise in bonding and cohesion. Their concept and sound both come off undercooked on the three clips they have on YouTube, but something sure smells good. Filmed in December for Park City TV's Mtn Views, the mix is bad (not their fault) and the songs are somewhat disjointed. "Crooked Stare" can't quite reconcile the sweet indie-pop verses with the rollicking choruses. "Rogue" finds singer-guitarists Kenzi Waldon and Devi Strill trading vocals and, while more focused, it's still a little off. "Cold Feet," a fist-pumper featuring Strill, is by far their best tune—a real cooker. There's something in the other tunes that wants to bubble up, and I'm eager to see how the band develops. But please tell me there's more to the tour than the one show in Boise, dudes! (RH) The Urban Lounge, 241 S. 500 East, 8 p.m., free, 21+, theurbanloungeslc.com