Music | Review: Ali thrills; Ghostface Killah, not so much at Harry O’s.

Let me start off by saying that I grew up in —lived there pretty much my whole life. Despite the enormous amounts of development that I have seen in my (relatively) short lifespan, it still retains a certain amount of small-town charm that’s hard to overcome. It’s not uncommon to run into your kindergarten teacher at a grocery store or restaurant and she’ll still recognize you and ask about your family. It’s what Green Acres would be if it was covered with snow eight months out of the year.

That familiarity is also the reason why I don’t go to bars or clubs up there. The scene is just teeming with people you knew from high school who haven’t gotten over the supposed “coolness” of it (cool like paying twice as much for drinks and watching 30-year-old ladies dress like 16-year-olds). Call me old-fashioned, but I take no pleasure in watching well-known LDS classmates get shit-faced or in seeing the valedictorian dry-hump some well-groomed choch—they’re just awkward situations that I’m better off avoiding.

But when Ghostface (or any ex-Wu Tang) comes callin’ you have to answer. When a publicist offered up a plus-1 entrance to Hip Hop Live tour at Harry O’s on Wednesday, Nov. 7, suddenly all my principles went out the window.

Around , the Rhythm Roots Allstars took the stage and proved to be the perfect warm-up band. A 10-piece from LA, they pummeled out a brief-yet-obligatory set of salsa-y music that had managed to steal the attention of an audience transfixed on the dancing Scary Hoes. They were very talented, technically, but I don’t think a career in the “perfect warm-up band” is something artists generally tend to strive for. Looking around, I could tell that the audience was eating it up, but since most of them looked dangerously underage, I assume that they were just happy to not have their IDs taken away.

Those PC kids are clever, I know.

Brother Ali was the first rapper to perform, with the Allstars as his back-up band. I have to say I was a little skeptical when I saw the 30-ish, overweight, albino rapper take the stage, but he unleashed what was to be the night’s most captivating performance. With a ferocity that white-rappers seem to feel they have to possess to compete in the hip-hop world (see Sage Francis), Ali’s nonstop flow ranged from angry to less-angry. Between songs, he would pay homage to the world of hip-hop, obviously excited to share the stage with his personal icons. Before his voice could give out (and it was on its way) he left us with a touching song about his kid. The emotion and sincerity was so high that he left the stage to the crowd chanting “ALI, ALI!” 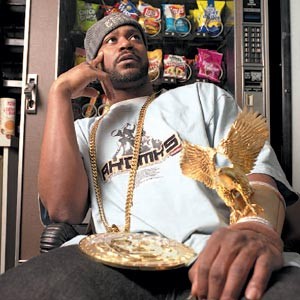 I want to take this moment digress. A couple years ago, I had the opportunity to see comedian Tracy Morgan for free in . His Brian Fellows was one of my favorite SNL characters at the time, so you can imagine my excitement. It might have been a bad night for him, but it turned out to be the least funny performance I have ever seen. I’m as politically-incorrect as the next guy, but his set made up of “cumming on the ass” and retard jokes just came off as mean-spirited. I felt taken advantage of, like he destroyed every perception of him I had. I’m still baffled by how funny he is on 30 Rock. Anyway, seeing Ghostface Killah reminded me of that night.

Ghostface came out to a crowd ready to throw themselves at him; Ali had revved us up and all Ghostface had to do was deliver. One by one, a posse of rappers emerged on stage until Ghostface had three or four other rappers onstage with him. Maybe it was supposed to remind the audience of an ensemble, like Wu-Tang, but it just came off as an unfocused effort. Ghostface often relied on this other emcees to carry the songs while he chimed in every once in awhile—and they weren’t that good. If you’ve ever been to a karaoke performance where there are more than three people onstage, then you’ll know what I’m talking about: everybody’s shouting over each other in one blurred, sloppy chant.

They would often start songs, maybe playing a verse or two before getting sidetracked trying to make the crowd chant “Wu-Tang Clan ain’t nothing ta fuck wit!” They would play Wu-Tang medleys, mix them with an ODB song and then maybe turn it into half of a Ghostface song. I think maybe they played three complete songs during the grating set, including unnecessarily long between-song banter. Somehow it took Ghostface around five minutes to tell the story of how “greedy bitches stole my cookies” before launching into the song “Greedy Bitches.” He would hold songs while making ridiculous requests to the light guy (“I just want red! None of this blinking shit!”). The crowd grew wary and had noticeably thinned by the time Ghostface finished. Even the Allstars looked lost, which confirms my belief that having a live band backing rappers isn’t always a good thing.

The tragic thing is, Ghostface’s album Fishscale is ill by all definitions. It would be unfair to suspect that such an amazing album came about by accident, but it’s hard not to think that after his performance last night.

Anyway, Rakim was good, but we didn’t stay through his whole set. It’s hard to get back into the groove after such a major disappointment, so we said goodnight to the Scary Hoes and made our way out the door, but not before recognizing one of the doormen as a former-PC football player. Ugh.