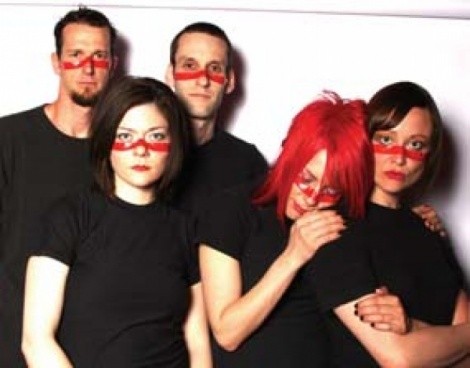 “It doesn’t even occur to me whether it’s fun anymore,” says Camden Chamberlain, a crazy-prolific Salt Lake City musician and recording engineer whose latest project Cavedoll is decidedly more upbeat than his attitude might suggest. A blast of electro-new-wave retooled, revamped and remixed on a seemingly daily basis, the group’s ever-evolving sound is an absolute riot—a welcome dose of insulin-shot-pop that redefines smart, sexy songwriting.

And yet, Chamberlain struggles to match the enthusiasm of a well-placed hook. After more than a decade of making music, he’s feeling the weight of an often soul-crushing industry. “I’m somewhere between being really jaded and really excited,” he says. “Just depends on the day.”

May 8 was a good day. That’s when NPR.org featured Cavedoll as a new artist to watch. A self-proclaimed “shameless promoter,” Chamberlain scored a coveted spot on the station’s Second Stage page thanks to good-old fashioned grunt work—and a couple of hired guns. While Chamberlain handles all of the writing, recording, mastering, distributing (not to mention raising kids, hanging with wife/Cavedoll member Vanessa and running Kitefishing Studio), he quickly realized there are some things better left to the pros.

“Locally, I think it’s best to do it yourself, but on a national level, you’re going to get farther if you hire people to help—it just lends legitimacy to it. I think there are three critical areas to it all: touring, radio, PR. To have the best chance at any serious success, I think you have to have them all going strongly all at once, which is hard to do without a pretty good-size label behind you,” he says. Of course, that’s assuming you lack the dough to match the talent. “Give me a couple of hundred grand to play with, and I guarantee you we’d be up there with the big boys selling a lot of albums in a few months time.

“If I were to be in the position of giving advice to another up-and-coming band, I would say to quit fantasizing about landing that big record deal and just realize that record labels are just loan sharks. Find a way to raise your own money, borrow it, do whatever, and do it yourself.”

As cheesy or pretentious as it might sound, Chamberlain doesn’t think he has much say in the matter. He didn’t choose music so much as it chose him.

“This really is just ‘what I do.’ Besides my family, it’s the only thing in life that I’m really passionate about,” he says. “I get pretty depressed when I go too long without doing it, so I suppose in that respect, it does make me happy. It at least keeps me somewhat sane.”

Clearly, Chamberlain feeds off that insatiable creative instinct. In the past seven years, he’s released several dozen albums under the names Deliccato, Jupassa, Geisha Glory and now Cavedoll. Though many people have credited the latter project for finally bringing Chamberlain’s vision into focus, he says it’s really just a reflection of his own personal growth.

“It doesn’t have much to do with the other people. It’s more to do with the fact that I’m more focused now,” he says. “Not to sound egotistical, but I mean I’m just getting better at what I do and learning—trying to get better, at least.”

“Some of it will get more collaborative if this lineup stays together, and I’m sure it will. I feel like this lineup is finally a good one that could work,” he says. “We get along really well, and everybody is cool with their roles.”

In addition to the recent full-length album No Vertigo, Cavedoll recently released three remix albums as well as electro covers album Robot Love: Scene 1. They will be available online and at live gigs, including this weekend’s performance at the Utah Arts Festival. Catch Cavedoll before they hit the road in July to play Oklahoma’s DFest where they’ll probably have at least a little bit of fun.