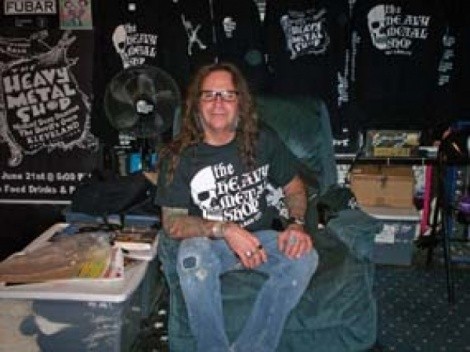 The Heavy Metal Shop is a local and international institution, whether anyone knows it or not. Kevin Kirk opened the music ’n’ gear store in Sugar House 21 years ago; the infamous HMS skull logo has been a staple of every metal musician and fan’s wardrobe worldwide ever since. Once Slayer’s Tom Araya set the standard by wearing a Heavy Metal Shop T-shirt in the ’80s, there was no going back.

On Saturday, June 21, The Heavy Metal Shop is throwing a free birthday party, with live performances by Michael Dean Damron, Kleveland and Pissed Pissedoffherson at the store (63 E. Exchange Place) at 5 p.m.; the party moves to Bar Deluxe (666 S. State) that evening for the adults. Kirk took time out from carving up animals—not for Satanic sacrifice—to explain himself:

City Weekly: Your slogan is “Peddlin’ Evil Since 1987.” Do you feel as evil now as you did then?

CW: Are there more people wearing Heavy Metal Shop T-shirts and hoodies than have ever actually been in your store?

KK: In the beginning, I knew everybody who sported our clothes. When we started out, I figured it would just be my family and friends wearing the shirts, so we printed a few and sold them in the shop. No marketing plan or anything, just a few shirts to advertise. It was kind of a gradual thing. Now we get mail orders from around the world though HeavyMetalShop.com, so there are quite a few people flying our colors who’ve never set foot in the shop.

CW: Do you sell more music or merchandise?

KK: We’re in the same boat as the bands, so to speak. When you can get the music for free, or buy downloads online, selling an actual CD is much tougher. The Heavy Metal Shop merchandise is definitely our life’s blood now. We still do sell CDs and records, just more classic metal catalog stuff these days.

CW: Shedding any tears over the flattening of your old Sugar House location on 2100 South?

KK: Sugar House was dead to us as soon as they booted us out and painted over our Slayer mural [in 1999].

CW: If Exchange Place suddenly becomes “cool,” will you have to move?

KK: They would probably force us out, and we’d have to relocate to another uncool place. Maybe move over to Broadway.

CW: Do you need a day job to pay the bills?

KK: The shop pays the bills, for the most part. Let me use the band analogy again: The Heavy Metal Shop used to play arenas; now we’re playing Club Vegas. To keep our evil toys, monster trucks and boats and to pay for the gas to use them, a couple of years ago I went back to my old day job cutting meat at Smith’s. I do that in the wee hours before I open the shop—so if you come in and I’m asleep in the La-Z-Boy, that’s why. I start my days at 4 a.m. That’s also why I open the shop at noon and close at 6, so please don’t complain about my shop hours. Have a heart.

CW: What was the best in-store you’ve ever had? Or the worst?

KK: Best, as far as the biggest, would have to be Slayer. We’ve had a lot of memorable ones, though. I especially like the live performances we’ve hosted—like Chainsaw Kittens, one of my favorites from the ’90s. Throw Rag, The Supersuckers and Red Planet were lots of fun! The worst would have to be the band Trouble. They were really cool, but nobody showed up to meet them, so we watched This Is Spinal Tap. And then they proceeded to kick my ass.

CW: What about the bands playing your 21st anniversary show, Michael Dean Damron and Kleveland? And who the hell is Piss Pissedoffherson?

KK: Michael Dean Damron is an Okie who now resides in Portland; he used to front the band I Can Lick Any Son of a Bitch In the House. He’s one of my favorite singer-songwriters, in the vein of Steve Earle and the Drive-By Truckers’ Patterson Hood. But besides that, he’s a hell of a great guy. He’s like the cool brother I never had. Kleveland, also from Portland, are like family too. Piss is the leader of The Devil’s Own from San Francisco—but you’re going to have to come to the party to find out who Piss really is. He has an encyclopedic knowledge of all things metal. You can play “Heavy Metal Trivia” with Piss and try your luck at winning some heavy metal prizes at the anniversary party.

KK: I’d have to thank Tom Araya, first and foremost, and all of the rivet-heads who’ve supported The Heavy Metal Shop over the years. The nonbelievers can go fuck themselves.