Music | White Anglo-Saxon Performers: W.A.S.P. kicked ass back in the day. Still do 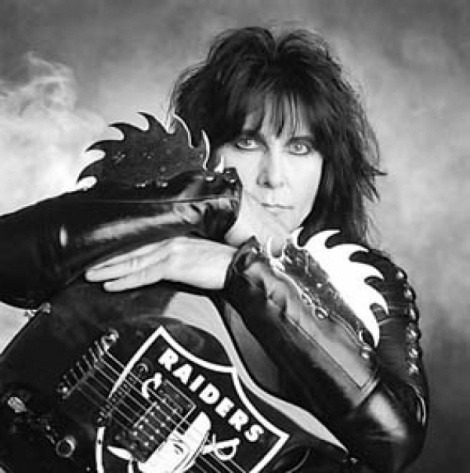 The idea of being pelted with raw meat—even at a time when Mad Cow Disease wasn’t shit compared to AIDS—was probably enough to scare anybody. Who would do that? The same sick SOB who’d guzzle blood from poor Yorick’s skull like Kool-Aid on a summer day, wearing an evilly demented glare that says, “After I wipe the red nectar from my lips, I plan to violate you a different way for each letter of the alphabet!” Oh, W.A.S.P. There is thy sting.

I learned about the rock group W.A.S.P. from a steady stream of ads and pictures in Hit Parader, Circus and RIP, and posters on my burnout cousin’s wall. Tipper Gore’s PMRC hysteria was in full swing—and my newly born-again father was working out his hellfire and brimstone chops—and my impressionable 14-year-old mind bought into some of it. I was sure that just looking into Blackie Lawless’ crazed, googly, eyes would be enough to make me hopelessly loco—or a pawn of Satan. Especially since Tipper and her troupe of stitched vaginas had declared—surely after thorough research—that W.A.S.P. stood for either “We Are Sexual Perverts” or “We Are Satan’s People.”

When I finally dared to read the articles, I got a sense that W.A.S.P. wasn’t as harmful as Tipper and my paranoia would have me think. And it turned out that Lawless, the band’s nucleus, had some cool credentials. He was in the New York Dolls for a spell (and Arthur “Killer” Kane’s band afterward) and London with Nikki Sixx. Still, when I stumbled across the video for “I Wanna Be Somebody” on MTV, I wasn’t prepared.

Lawless was a demon in black leather, wild-eyed as he stalked the stage with his black widow-shaped B.C. Rich bass. He sang like a banshee that drank too much milk and, as the clip closed, he drank from the skull. This time, I got it—it was awesome. I borrowed my cousin’s copy of W.A.S.P. and wore it out, digging how Lawless took Alice Cooper’s shticky hard rock and the Dolls’ pop smarts into heavier, more sinister territory in his frightening fist-pumping anthems about teen angst, kicking ass, fucking and—awwwww—love. I dubbed myself a copy.

Soon I started to see ads for a new album—The Last Command—all over the place. And oddly, my ultra-snooty junior high stuffed us in a room one day to watch MTV, W.A.S.P.’s “Wild Child” came on. Were I not outgrowing my religion-based irrational fears, I’d have believed the band—agents of Satan—was following me around, plotting my assimilation. Anyway, it was too late.

“Wild Child” was W.A.S.P.’s poppiest song yet, but its ominous riffs and meathook chorus were just devilish enough—and Blackie had lost nothing in terms of his threatening demeanor. I watched them rock atop craggy desert mountains between shots of Lawless riding a chopper down a long stretch of road, riding hard toward an encounter with a devil woman clad in red—a “nake-ehhhhhd heat machine!” It set me off like Beavis & Butt-head. Yeah! Yeah!

They came to town, opening for Kiss, and did an in-store signing at Crossroads Mall. I hightailed it there and bought The Last Command, listening to it on my Walkman. The cassette insert had pictures of the band’s decapitated heads on poles, dripping with raw gore. Sweet! Alas, W.A.S.P. showed up very late and signed for maybe 15 minutes before leaving. Crestfallen, I went home to await showtime.

Oh man, it was cool. Giant replicas of the heads-on-sticks towered over the band. Lawless’ voice was at full power. Guitarist Chris Holmes was drenched in sweat and beer—hilarious, ‘cause I’d read he was raised Mormon. Lawless’ stage rap leading into “Wild Child” (based, no doubt, on the video concept) was deliciously cheesy: He told how one time he was riding through the desert when this hot babe appeared on the side of the road, just beggin’ for it.

Blackie: No, no—I’m gonna mount you, then I’m gonna stuff you.”

And the crowd went wild!

I waited for the raw meat, but it never came. Instead Blackie made the crowd scream to be fed W.A.S.P. merch. Disappointing, but still that show kicked ass. It was the first time I saw a band come out and really give it hell. It was one of the most exciting shows I’ve ever seen, and although Lawless is the only original member—no drunk-ass Holmes—W.A.S.P. still pulls out all the stops with pyro, blood and Lawless’ elaborate, spark-spitting, motorcycle mic stand and a start-to-finish rendering of their critically-lauded concept album The Crimson Idol. I can’t wait for Wednesday night.