The mile-markers of Utah music 2012

“Music has always been a matter of energy to me, a question of fuel. Sentimental people call it inspiration, but what they really mean is fuel. I have always needed fuel. I am a serious consumer. On some nights, I still believe that a car with the gas needle on empty can run about 50 more miles if you have the right music very loud on the radio,” said gonzo journalist Hunter S. Thompson.

To extend the metaphor, the fuel that is the music of Utah has been high-octane in 2012, and we’ve driven far and wide. Here are the year’s pit stops, or noteworthy moments. 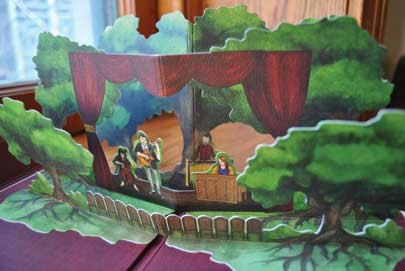 Thematic Albums
Serious: Many of my favorite local albums had a thematic approach—but not similar themes. Joshua James’ record dealt with the mystical and spiritual search at the bard’s core; Eagle Twin dug into mythological symbols; Book on Tape Worm put out a collection of sad, literature-inspired songs (the CD packaging was a pop-up book, pictured above); Gaza yelled about anti-religion and anti-establishmentism from a soapbox of sonic bricks; Chinese/American hybrid-folk band Matteo released a five-song EP recorded at Sichuan University in China during their period there as artists-in-residency; and Open Orchard Revival was a collaborative effort between The Folka Dots and The Trappers to record a memorial gospel album.

Landmark Successes
Firsts: For the first time ever, Clark Planetarium worked with a local musician to produce a light show, utilizing CGI animation with CPU-intensive, high-graphic images. Brad Stock’s The Atomic Clock is cosmic-sounding—perfect fodder for a trippy planetary show (pictured). This next one’s bittersweet: L’anarchiste landed “Sleep” on prime-time TV—Jersey Shore. The lush, slow song came on when Deena was crying to her mom while having a “meatball day” (seriously). The Piano Guys performed the first full-length concert to be filmed at Red Butte Garden. It aired on KUED.

UtahTube: Utah musicians garnered millions of views on YouTube, mainly with cover songs. More on The Piano Guys: With videos shot at stunning Utah locales, the five dads have received more than 160 million views in total; their cheeseball cover of One Direction’s “What Makes You Beautiful” has more than 13 million views. Ex-Survivor contestant Tyson Apostol and the Utah-based production company Teddie Films racked up more than 8 million hits with a Gotye parody, “The Star Wars That I Used to Know.” Provo-based pixie Lindsey Stirling’s videos, filled with quirky dancing and violin-ing, were filmed in Utah County and went viral (more than 141 million total views). The kids can’t get enough of her classical-music-infused dubstep, including a rendition of The Legend of Zelda theme. There’s also a rumor that the music video for “Gangnam Style” was filmed in Provo.

Scene makers: Provo-based pop-rock sensations Neon Trees landed sophomore album Picture Show at No. 17 on the Billboard Top 200, with lead single “Everybody Talks” coming in at No. 6 on the Hot 100 chart. Neon Trees opened for Flaming Lips in Mississippi to help make history, when the Lips broke the Guinness Book of World Records record for most concerts in different cities (eight) during a 24-hour period. Spirit Master also connected with the Flaming Lips: Via Twitter, Spirit Master asked Wayne Coyne if they could open the show at the Great Saltair, which they did—and made a short doc about it. Jay Leno loves The Urban Lounge, apparently. When indie-rock band Tennis performed on The Tonight Show in March, Leno mentioned their next gig—at The Urban Lounge. Why? Leno obviously loves hipsters.

Artist/Fan Interactivity
Crowdfunding
was a significant theme for 2012. Book on Tape Worm, Parlor Hawk, The New Electric Sound, Matteo, Open Orchard Revival, The Awful Truth and The Mighty Sequoyah, among others, launched campaigns with industry game-changer Kickstarter to fund their albums. Using a similar platform, BringTheGig.com let the people become concert bookers, and that crowdfunding website brought Jonathan Coulton and First Big Flight to town. GigViz.com, an online streaming website, launched this summer to allow at-home-in-your-pajamas concert experiences—both local and national touring bands performing at local venues. It doesn’t replace the live-concert experience, but neither do concerts replace the Chinese-take-out experience; this is a happy middle ground.

Collaboration Is Key
The Utah Music Association, an advocacy organization for Utah musicians and music-industry professionals, launched in April 2012 with a tri-fold mission: recognition, community and philanthropy. After partnering with Conscientia Productions and moving to Jenk Star Ranch, Desert Rocks Festival became a “celebration of consciousness” rather than “just a party.” The weather wasn’t pretty, though, and, despite positive intentions and vibrations, it was a horrible weekend. Maybe next year. Artists for Local Agriculture (Carissa Gardner & Mike Cundick are pictured) hopes to plant awareness seedlings—for a younger, concert-going demographic in the community—about everything from corporate agriculture to local farmers’ needs. The nonprofit launched plans for a downtown community garden in 2013—broccoli has never been so hip.

Hey DJ
W Lounge closed, rebranded and reopened in a new location as food-focused Zest Kitchen & Bar, which still hosts DJ events. Nightfreq branched out to host parties in Los Angeles, thanks to Cedes and Arsenal. Former Uprok Records co-owner Chase One2 got out of the record biz. BassMachine.com received kudos from Beatport and Earmilk—no easy feat. And Flash & Flare finally got a gold grill (pictured).

Everything Else
Stuff people complained about: Twilight Concert Series began charging a $5 admission to help continue booking killer bands. With the fee, the lineup was better than ever, although it’s unfortunate that many of the thousands in attendance at Pioneer Park aren’t there for music. The Salt Lake City Jazz Festival went from three days to one, and former mayor Rocky Anderson, who oversaw the festival’s implementation, proceeded to grumble about the change on Facebook. Also, old-schoolers whined about KRCL’s programming (see above), as usual.

Stuff for eyes: King Niko frontman Ransom Wydner vied for a spot on competitive reality TV show The Voice, but, unfortunately, he didn’t make it past qualifiers in California. BYUtv proved innovative by featuring local and national bands on its mini-doc series Audio-Files, and individual musicians in a sweet, heartfelt series titled The Song That Changed My Life. Inspired by NPR’s Tiny Desk Concert Series, KCPW launched Sounds From the Lounge—an online video series of live, in-studio performances—to highlight local talent. And, finally, Brandon Cahoon’s pseudo-documentary about local singer-songwriter David Williams, Intro, following on the heels of its screening at the Torino Film Festival, was shown at the Salt Lake City Film Festival.