Symphony musicians are getting some club gigs.

Like a little Mozart with your mojito? Violinist David Porter helped create Musicians of the Utah Symphony, a group of 10 musicians who are kicking off the After Dark Series on Friday, Dec. 11, at 9 p.m. at Under Current bar (279 E. 300 South, Salt Lake City). Featuring selections by Mozart, Paganini, Muhly, Ysaye and Schubert, the group will perform sets roughly 20 minutes long. A $10 cover charge is payable at the door. To find out more about the program, visit MotusAfterDark.com. 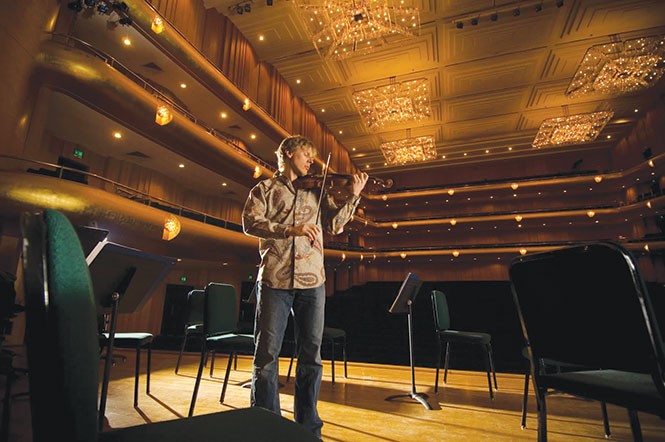 So, what’s the relationship between a cocktail and classical music? Do they go together like Scotch & soda?
They both make you feel warm and fuzzy and can be Old Fashioned.
Isn’t the goal to bring people out of the bars into Symphony Hall? Or are you the Pied Pipers?
Well, our Principal Flute Mercedes Smith is playing—it’s all part of our elaborate scheme.
Will your group be wearing tuxes and gowns?
Nope, just the hipster outfits that are apparently required to frequent any downtown Salt Lake City bar, but I’ll wear a gown if City Weekly will feature me on their cover.
What is considered proper etiquette for such events? Are bar patrons allowed to talk among themselves during the performances?
Duct tape will be administered at the door, with a hole just big enough for a cocktail straw. Sure, people can chat, or even yell out if they love it—we just want people to engage and really listen. Maybe just use common sense so others can enjoy the music.
Pretend you are Mozart: What would you say to 21st-century bar patrons about the music you’ll be performing?
I wouldn’t say a word. I would play the sublime opening of the second movement of my 23rd Piano Concerto and dare people to ignore the music of the gods.
Conversely, what would Mozart think about the audience of the 21st century?
I think he would be consumed with jealousy of Kanye’s success. More seriously, contemporary concert hall etiquette is a relatively new phenomenon. In Mozart’s day, it was commonplace to clap during the music if audience members were so moved, or to have movements spontaneously repeated. So, one could argue that the more interactive atmosphere at MOTUS After Dark events would be quite familiar to Mozart, and everyone knows that Mozart loved the nightlife.
What’s a brief juicy tidbit or interesting factoid about each of the musicians you’ll be playing with?

How do you choose music for After Dark events?
Classical musicians are offered an embarrassment of musical riches, so it’s often more about what not to program, like trying to fit the Louvre into your average living room. We offer relatively short movements or works that illustrate the striking variety of color, expression, and style classical music has to offer, often ones that I remember hearing as a teenager and never being able to forget.