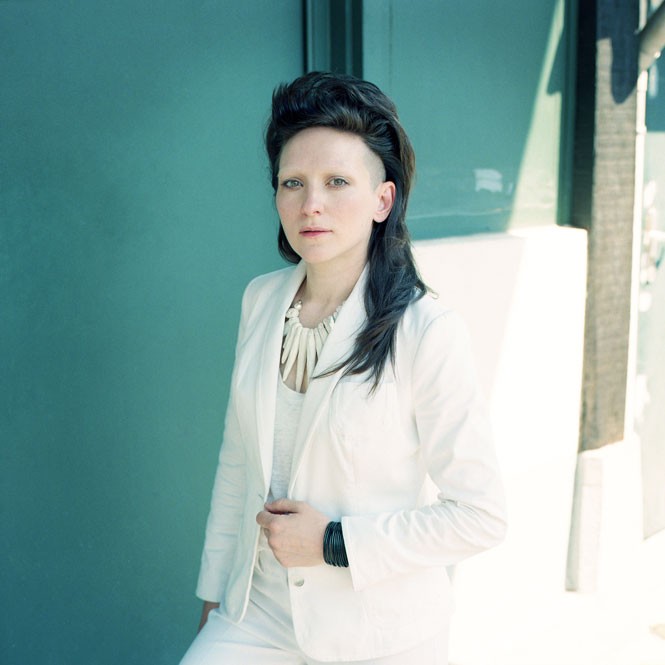 The music video for "Pressure," a sparkling new single by Shara Worden, aka My Brightest Diamond, is filled with bodies in motion. Flailing, whirling, spinning, kicking, colliding and bending, they wildly and ecstatically dance, moving together to the rhythm as one united group of hands, feet and limbs.

This emphasis on the body at its most physical is indeed a significant theme of Worden's latest album, This Is My Hand, released in September. But on a deeper level, the music is largely inspired by the revolutionary act of claiming one's own body.

"I grew up in a Christian culture that didn't allow room for the body at all," says Worden, who was born in Arkansas. Though her parents listened to a variety of music, "they didn't let me dance," she says. And in college, when she realized it might be difficult to be recognized as a legitimate musician if she was also a dancer, she chose to "shut down that part of me," she says.

On This Is My Hand, the Detroit singer-songwriter and composer's fourth original release as My Brightest Diamond, she sought to put an end to those years of self-denial. "I really wanted to ... begin that kind of self-acceptance, take ownership of my body for myself—not for what I grew up with or I thought people would think of me or any of that," Worden says.

Worden's original vision for This Is My Hand was for a "full experience of like a tribe coming together and dancing and singing and clapping, and telling stories together," she says, but "when I went to write dance music, I realized that I don't know how to write dance music." Worden's sound—as heard on earlier albums such as 2011's All Things Will Unwind and 2008's A Thousand Sharks' Teeth—has up till now been soft-edged, often-ethereal orchestral-pop, delicately woven with strings, horns and Worden's unearthly, smoky voice.

This Is My Hand, however, is Worden's first album where "a lot of the music did start with the beats first," she says. The symphonic quality remains, but underneath the inventive combinations of marching-band-like drums, flutters of woodwinds and jazzy horns is a sleek, dance-worthy beat.

The unique sound is a result of the meeting of two opposing ideas in Worden's musical philosophy. On one hand is the "idea of music being for everybody," embodied in the accessibility of punk, she says. "But then there's another side of me that loves astronauts. And the astronauts go to the edge of the universe as far as they can see, and they specialize, they push the limit of what they can know," just as composers continually push boundaries when they create classical music.

Worden says she's "always pulled" in both directions, and that tension is crystallized in This Is My Hand, which intrigues the mind as it propels the feet to move. There's similar range in the lyrics; some are esoteric, full of cryptic symbols, but others are universally applicable, such as her descriptions of what it means to be a human with a human body.

This Is My Hand is a pivotal point in Worden's career "on many levels," she says. The progression through her previous albums has "been a journey of these experiments over these four records of trying different instrument combinations and different acoustic solutions and struggling with it," she says, "and now it feels like in a new place."

And whatever Worden comes up with next will be an even newer place. She has plans to simplify her sound, shedding the intricate embellishment to focus more on the musician/listener connection. And, perhaps most significantly, she hopes to move toward subject matter that's "less conceptual in a way and more just like, 'Here's me, here's a human being, and this is what a human being can do with their body and with their voice.'"