Psychedelic western blues-rockers return from tour in the black. 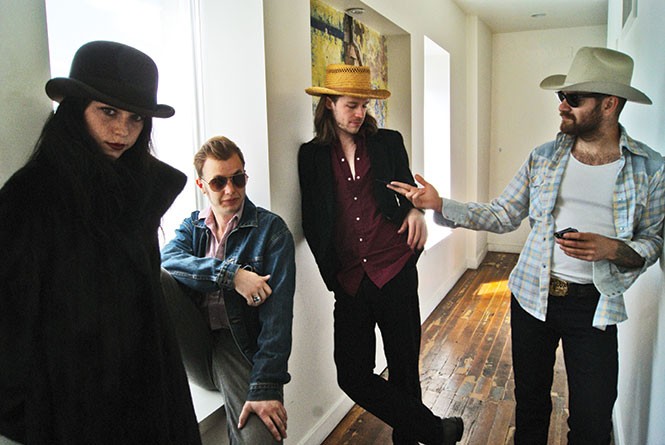 Eight days back from tour, Crook and the Bluff bassist Kevin Schultz and guitarist Ryan Arnold are perched on barstools at Junior's Tavern, while singer-guitarist Kirk Dath pours draft beers for customers. Schultz' eyes roll upward as he tries to recall how many shows they played: "... 16 in 19 days, I think."

The road-weary band is a cliché, and a fact of musical life. After a week-plus at home, they still look tired—and Schultz is leaving town again tomorrow. But even when it's for some humdrum occasion, like a family reunion or job interview, the road brings adventure. Halting daily grinds (Schultz teaches music, Arnold works at Jade Market) to load the car and light out, exploring the limitless potential ahead, is a reprieve and a rebirth. When your journey involves playing music for strangers in strange towns, the anticipatory magic multiplies.

Sometimes—perhaps always—the fantasy trumps reality. Nothing ever goes as planned, Styx sang. Given the title and tone of the band's album, Down to the Styx, that seems especially apt. The "psychedelic western blues rock" is their own Charon, the ferryman, paying their own fares for a dicey trip. Only they're not dead sods; they're musicians. That's where the pipe dream can break down: "Jump in the boat/ to Hell I go," Dath intones in the title track, leading into a burning, fuzzy, 16-bar guitar solo.

"You pretty much work your day-job to go on tour," Arnold says. Dath, sauntering over between pours, adds, "I work here to support my gear habits, and to make a tour work." He can make $250 at Junior's on a Friday night, or perform for free (or, ironically, for beer). If they're lucky, they might make $200 as a band. "But that rarely happens," he says.

Touring is a necessary—and expensive—evil. "If you feel like you have something that's worth getting out there, you do it," Dath says. "In order to get promoters and venues and other bands to buy into you, you've got to buy into yourself," Schultz adds, "to show them that you've deemed that your music is worth your blood, sweat and tears, so it's worth [their efforts], too."

The group went into their third tour with realistic expectations. Any independent band, Schultz says, operates in the red for a while before the ink, hopefully, blackens; "Our biggest goal was to break even." This time, Dath says they returned "significantly in the black."

The sentimental ink is likewise dark; they're richer in experience, exposure and supporters who enjoyed seeing a band play great songs accompanied by an analog lionid light show by Lance Gordon of the San Francisco-based Mad Alchemy. They also added stories to Bluff lore, like when police separated and interrogated them for two hours after a misadventure on the Golden Gate Bridge. It wasn't fun, but it's a nice memory of their last hurrah with drummer Sarah Anne DeGraw, who they knew would leave after the tour to focus on her singer-songwriter career.

Crook and the Bluff's somnambulant, tortured songs make sublime traveling music. They occupy—and score—that dark-gray space between asleep and awake, fantasy and reality, lies and truth. It's like when you're driving with nothing to look at and everything to think about, and your mind's eye is keenest, registering more than your physical rods and cones. Or when you're working that day job, pouring pints, teaching scales or stocking shelves, wondering when—if ever—you'll get to move forward, to see if, somewhere down the road, you'll get to go on another adventure. One where you've somehow bamboozled fate into letting you do what you want to do, not what you must.

Texting with Dath a couple of days later, City Weekly asks the significance of the band's name. Is crook to bluff what criminal is to con? Or is it like in westerns, where an outlaw stands at the precipice, with a choice between the hangman and dying free? "You pick," he says. A text to Schultz asks if he's traveling for business or pleasure. "Technically business," he writes. "I'm on a short Arizona tour with [local folkie] Charles Ellsworth. It's certainly enjoyable, though."

When Schultz returns, the band will play a welcome-back show with a fill-in drummer, and continue to write new material. Dath says that, unlike Styx, where he wrote nearly everything, all members now have "equal input." They're in a transitional period, he explains. They don't want to write albums, but rather performance pieces that incorporate the visuals, "like Crook and the Bluff Present ... whatever." But first, they're heading south to headline the Escalante Canyons Art Festival. So begins another journey.