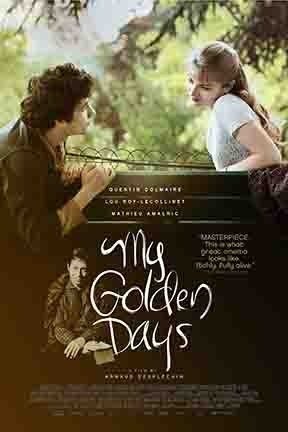 ★★★★★ ★★★★★
Nostalgic, aching reminiscence gets the Arnaud Desplechin treatment—meaning that it’s a narrative full to nearly bursting with tone shifts, emotional swings and cinematic flourishes. Beginning in the present with the story of an academic named Paul Dedalus (Mathieu Amalric) as he prepares to return to Paris from Tajikistan, it’s spent mostly in flashback to key events from Paul’s 1980s youth (Quentin Dolmaire), particularly his mercurial relationship with his first love, Esther (Lou Roy-Lecollinet). Once Desplechin settles into that story, it’s an affecting story of young romance, complicated by their long-distance relationship, the challenges of volatile family and friendship connections, and their respective insecurities. You just need to wade through Desplechin’s penchant for diversion—like an odd subplot involving young Paul’s involvement in smuggling documents to Soviet Jews—and find it endearing rather than distracting that he’s so fond of stuff like split-screens, iris shots, direct address to the camera and ghostly apparitions. This is a filmmaker who’s always been committed to conveying turbulent feelings in an unapologetically big way—which means he’s found an ideal kind of story to tell. By Scott Renshaw

Sorry there are no upcoming showtimes for My Golden Days