My Short-Lived Life as a Competitive Eater

Having a superhuman appetite, I’ve long clung to the illusion I could make it as a competitive eater. I'd travel the nation awash in grease, fame, women and Tums—garnering free T-shirts and dinner coupons while leaving my proud picture on the walls of fine eateries across the land.

In my brief attempt to conquer two local eating challenges, I have instead been left with only a deflated dream and a stomach bloated and distended by defeat.

As Tenney’s is a place to pick up pizzas for takeout, it is not an ideal setting for a challenge. You have to eat the monstrous (but delicious) pizza in the waiting area at a coffee table. As people stream in to pick up pizzas, they look over from the register at some fatso sitting quietly in the corner by himself, eating a pizza larger than a wagon wheel.

The Beast was my first indication that I was in over my head as a competitive eater. The first presidential debate was playing on the store’s radio as I sunk my teeth into the Beast. Like the president, I came to realize that I had apparently bitten off more than I could chew. After an hour of woodenly chewing and having pepperonis carve the roof of my mouth, I downed only 10 of the 16 slices.

The Beast was supposed to be a warm-up victory for my showdown the following evening at Lucky 13 (135 W. 1300 South, Salt Lake City, 801-487-4418, Lucky13SLC.com). The Lucky 13 challenge is 5 to 6 pounds of food in two hamburgers and a plate of fries that’s worth $500 if you complete it in an hour. The challenge itself costs roughly $34 and has never been accomplished because, frankly, it’s an impossible feat.

The Big Benny is a foot-high burger decked out with sauteed onions, house-smoked bacon and ham on top of 28 ounces of ground chuck burger. Its smaller companion, the Lucky 13, is the showstopper—14 ounces of burger with grilled-cheese sandwiches for buns. Here’s the kicker: The sandwich buns are injected with an evil number of roasted jalapeños and habaneros. The burger patties are doused in a lava-like glaze of Belizean habanero purée and smooshed all over with more roasted habaneros.

The Big Benny was a delight. I knocked that tower of chuck down without shedding a single bead of the meat sweats. But there’s a reason the bar makes you sign a liability waiver—you agree to pay for any vomit-related damages: The Lucky 13 itself is a stomach-destroying terror.

At least in the Lucky 13 challenge, you’re allowed to drink whatever you like, and the bar was gracious enough to provide me with cups of cream to help douse the fire. Still, the heat was unbearable. At one point, I created “spicy pills,” taking the unadulterated bun from the Big Benny and wrapping it around habanero paste from the Lucky 13 and then swallowing the bites whole like big, fiery horse pills. This only delayed the impact of the spice and allowed the full fury of these bites to be unleashed entirely on my innards, creating a certain intestinal hell I wouldn’t wish upon my worst enemy.

I felt gut-shot the entire following day, racked not only with my shameful defeat but the feeling I had burned a hole in my intestines. I have now resigned from competitive eating, and maybe it’s for the best—clearly, it’s a sport that requires more discipline than I had expected. Plus, if I did it full time, it would turn all the joys of overeating into work—and where’s the fun in that? 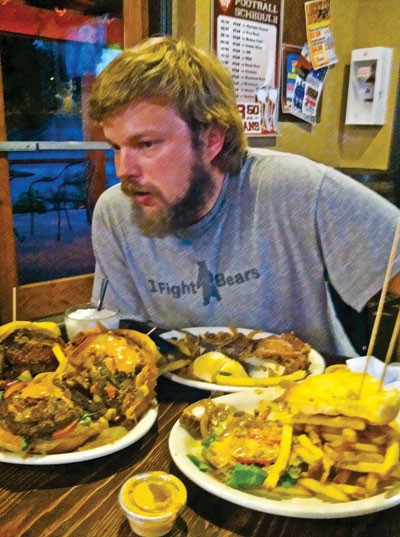 Eating for Fun & Profit
These 10 restaurants let you face the challenge.
By Colin Wolf

Insatiable beasts train their stomachs for any type of threat. They eat warm-up meals before every sit-down dinner. They’re no longer invited to friends’ barbecues because they’re known to eat all the beef. So for all you competitive eaters extraordinaire, we’ve compiled a list of Utah’s biggest, hottest and greasiest food challenges sure to motivate the most competitive of steely guts.

The Lucky 13 Burger Challenge
The Challenge: First, you must crush one Big Benny burger: a 12-inch-tall behemoth consisting of four 7-ounce patties, bacon, ham, cheese and sauteed onions. Then, you must eat one Lucky 13 burger, which in place of buns has two grilled-cheese sandwiches containing two 7-ounce patties topped with habanero and jalapeño peppers. Oh, yeah, and there’s a pile of fries, too. (See “My Short-lived Life as a Competitive Eater”)

Kobe Sushi’s Hellfire Sushi
The Challenge: Consume one spicy tuna roll from each of levels 4, 5 and 6 on the hotness scale, then devour six of the Level 7 spicy tuna rolls.

Boardwalk Pizza’s Longboard Calzone Challenge
The Challenge: Digest a 5 1/2 pound, 16-inch-long, supreme-style calzone with meatballs that would normally feed up to five people.

Sensuous Sandwich’s 24-Inch Challenge
The Challenge: Take on any 2-foot hoagie filled with 1 pound of meat and cheese.

Angie’s Restaurant’s Kitchen Sink Sundae Challenge
The Challenge: A little over a half of a gallon of vanilla ice cream, your choice of three toppings, two bananas and heap of whipped cream. Served in a miniature sink.

Time Limit: None
Cost: $11.99
Prize: Photo on the wall of fame and a bumper sticker that says “I cleaned the sink at Angie’s”
Difficulty Level: For some, this would be an after-challenge palate cleanser.
690 N. Main, Logan, 435-752-9252, Facebook.com/Angies-Restaurant

Wing Nutz Purgatory Challenge
The Challenge: One must sign a waiver and then plow through 10 hot wings soaked in purgatory sauce (a habanero and cayenne-pepper mix). The goal is to beat each location’s record, which is usually under two minutes.

Time Limit: None.
Cost: $9.99
Prize: Free T-shirt, the wings are paid for and your picture goes on the wall
Difficulty Level: Find your soul mate, Homer.
Multiple locations, WingNutzLLC.com


Pop On Over Cafe’s Devil’s Challenge
The Challenge: All you gotta do is eat 12 deviled eggs cut in half. Seven of the eggs are tolerably hot, but the final five are made with Trinidad scorpion peppers, which are literally the hottest peppers in the world. Even if you finish eating, to complete the challenge, you can’t eat or drink anything for 10 minutes.

Drafts Park City, F’N Hot Challenge
The Challenge: Mouth-punch your way through 10 wings made with a secret hot sauce that changes every time someone completes the challenge. Once you finish, you have to sit there for five minutes without anything to eat or drink.