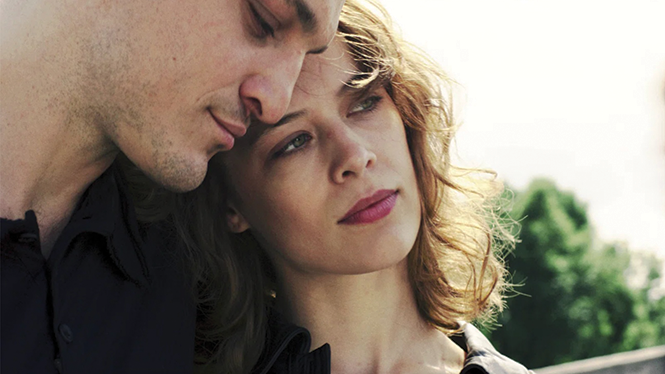 The mythologies created by humans—across eras and cultures—have always been stories that help us try to make sense of our own existence. They're a code to be cracked, though not always a difficult one, with real-world application. So what, exactly, is the story behind the story of Christian Petzold's Undine?

It's clear, not just from the title, that Petzold is making use of the mythology surrounding ondines—female water spirits who can only acquire a soul via love with a human man, and who curse those men with death should they be unfaithful. In the opening scene, Undine Wibeau (Paula Beer) is on the receiving end of a dumping from her boyfriend, Johannes (Jacob Matschenz), at a café in Berlin. And she informs him, in no uncertain terms, of the possible consequences of following through on the break-up: "If you leave me, I'll have to kill you."

It doesn't sound like an idle threat, but it's also one that Undine quickly forgets when, on the same day as that breakup, she meets Christoph (Franz Rogowski, Beer's co-star in Petzold's Transit). They quickly fall into a passionate, somewhat-long-distance love affair, with Christoph—an industrial diver who makes underwater repairs on dams and bridges—and Undine traveling back and forth by train to one another's home cities. Petzold effectively captures the swooning quality of a romance's early days, right up until an event that makes Undine begin to regret that she hadn't followed up on the necessary consequences for Johannes.

But there's another fairly significant part of Undine that's not directly connected either to the Undine/Christoph relationship or to the potential fallout from Johannes' infidelity: Undine's day job as a historian/docent giving presentations to tourist groups about Berlin city planning and architecture. She walks guest through the layout of scale models; she addresses how the political goals of Communist East Germany affected decision-making about building design; she even, at Christoph's request, turns the rehearsal of a talk about the rebuilding of a bombed-out castle into a kind of foreplay. If you walk into Undine never knowing a single thing about the buildings of Berlin, I guarantee that won't be the case when you walk out.

The question is, why? Petzold certainly hasn't shied away from ambiguity in his previous films, like the aforementioned Transit, in which the touchstones of the story's setting made it unclear whether it was taking place in 1940s Paris, or in the present day. But Undine's architecture-based monologues make up such a large chunk of Undine—and feels even more so given the film's tight 90-minute running time—that it's clear Petzold intends it to be part of the story's thematic foundation. What precisely that is, especially to someone with zero previous grounding in the subject matter, could be confounding. Is Petzold attempting to connect the incorporating of ancient mythology into a contemporary story with the challenge of incorporating modern design into an ancient city? Is there a metaphor here somewhere for the post-Soviet reunification of Berlin? Any of those things could be true. Or none of them.

Strangely, it doesn't feel essential to "solve" that slippery subtext in order to appreciate Undine on its most surface level as a fantastical tragic love story. Beer's performance keeps Undine's possible alien-ness just percolating below the surface, and somehow adds to the humanity of a strange being in simple moments like having her hurriedly prepare for work. Petzold brings a more accessible mystery to moments like the shattering aquarium that accompanies Undine and Christoph's "meet-cute" first encounter, or to Christoph's underwater sighting of a gigantic catfish. If this were simply a short-form interpretation of the ondine mythology, it would easily prove satisfying, if not as emotionally powerful in its resolution as some of Petzold's previous features.

Still ... what the hell is up with all the architecture? I'm not arrogant enough to suggest that this might not just be a "me" problem, plainly decipherable by someone else in a way that might someday make me smack my head. It's just that when a movie makes a point of having someone say that "form follows function," it's hard not to get stuck on wondering "why this form?" and "what function?"