Something Fishy: Mikado morphs into Naked Fish, but is it anything new? 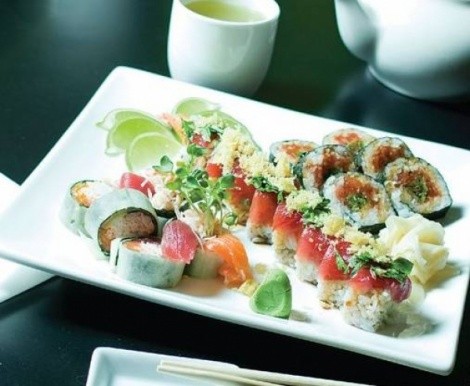 I’m a restaurant critic and food writer— an opinion columnist, not an investigative reporter. I leave that sort of heavy lifting to the guys and gals with journalism degrees. So I’m not especially equipped to unravel the complex saga of former restaurateur Gene Kwon and his Latitude restaurant group, which, at one point, operated 11 restaurants along the Wasatch Front and in Park City. This is certainly a case of “Oh, how the mighty have fallen.”

Kwon seems to have gone underground, leaving a trail of lawsuits, alleged unpaid taxes, unreturned phone calls and collapsed restaurants behind him, including the recently closed Ruth’s Chris Steak House in downtown Salt Lake City, Café Pierpont, Harry’s and Kampai. Word is that Ruth’s Chris may reopen with a new franchisee operating the restaurant. Meanwhile, there is an army of disgruntled ex-Latitude employees out there.

All of which brings me to Naked Fish, the new Japanese restaurant which recently opened in the space that, for decades, was home to Mikado, another restaurant operated in recent years by Kwon’s Latitude group. “He has nothing to do with this restaurant,” an employee was quick to assure me when I asked about his involvement in Naked Fish. When I followed up, I was told the Naked Fish is owned by The Blackstone Restaurant Group, and the contact person is Johnny Kwon, Gene’s brother.

Naked Fish does seem to be heavily populated by chefs and servers formerly of Hapa Grill, the Asian “bistro” Kwon opened in Park City. I was told that Naked Fish’s executive chef is Toshio Sekikawa. With Latitude, “chef Tosh” helped to create menus at Hapa Grill, Mikado and Harry’s, among others. So one might wonder: Is Kwon actually secretly behind the newly renovated Naked Fish? Beats me. All I can really tell you about is the food, service and ambiance.

Buddha Bar-style music permeates. Which I suppose begs the question: Do we really need another sushi restaurant? It seems like there are more places to eat sushi in the Salt Lake Valley than in Kyoto. So what has Naked Fish got to offer that the others don’t? Well, not much, actually. The menu is predictable. Overpriced edamame ($3.50) gets even pricier if you order the spicy version with garlic sauce ($4.50). For $9.95, there’s an attractive presentation of spicy, battered and deep-fried calamari nestled into a shell of fried wonton wrappers with a single deep-fried chile pepper alongside. The big chunks of calamari were surprisingly delicate and tender, but stilled tasted humdrum without any dipping sauces to embolden the rather lackluster squid.

You need no further proof than misomarinated sea bass ($17.95) to illustrate that Naked Fish is fully clothed and not really taking any chances. Miso-marinated sea bass is to Japanese restaurants here what fettuccine Alfredo has become to Italian ones: ubiquitous. Ditto for teriyaki filet mignon ($19.95), veggie tempura ($10.95) and the routine assortment of maki rolls like spider, playboy, Philly, caterpillar, funky, rainbow … yawn. In fairness, there are a few sushi rolls that depart from the norm—the “Mean Gene,” for example. Wonder who that’s named for? One roll—Spicy Jin Jin ($6.95)—was a hit. It combines spiced tuna with crunchy tempura jalapeños topped with a sweet soy glaze. The result is an appealing yin and yang of sweet and fiery flavors.

Table service at Naked Fish (as opposed to eating at the sushi bar) can be maddeningly slow. It took 10 minutes after being seated for a server to deliver the wine we’d ordered, and the rhythm of the restaurant just seems off. One server, Omar, is a guy I remember from Hapa Grill. He’s very friendly and personable, but at a dinner where we ordered an appetizer, maki roll, nigiri and sashimi, we didn’t expect it all to arrive almost simultaneously.

So you might want to play your cards close to the vest at Naked Sushi: Pacing is not their strong suit. I’d advise ordering your lunch or dinner in stages. Of course, the situation is more easily remedied by eating at the sushi bar, where there isn’t a go-between buffering you and your sushi chef. Speaking of sushi chefs, we ordered the special dee ruk sue sashimi combination ($19.95), described on the menu as “twelve pieces, six different kinds of fish, chef’s choice.” Pay attention to that last part: chef’s choice. Frankly, we were disappointed in the sashimi selections our chef made, which were all too pedestrian (I’m trying not to use the word cheap). Although fresh tai (red snapper) and kanpachi (amberjack) were being featured at Naked Fish, neither was included in our chef’s-choice sashimi combo. Instead, we were given octopus, maguro (big-eye tuna), shrimp, scallops, hamachi (yellowtail) and—yawn, again— salmon. Why wouldn’t the chef want us to eat the nightly special tai or kanpachi? My guess is they were more expensive than shrimp, salmon, octopus and hamachi.

I also wondered why we got freshly grated, real wasabi—which is more delicate in flavor than reconstituted wasabi powder or paste—with our sashimi combination but were given the bright green faux stuff with the rolls and nigiri we bought. Apparently, customers aren’t worthy of the real wasabi unless they go large—which left me feeling a little naked. CW