Why are girls and women not given the title "Junior," "II," etc.? 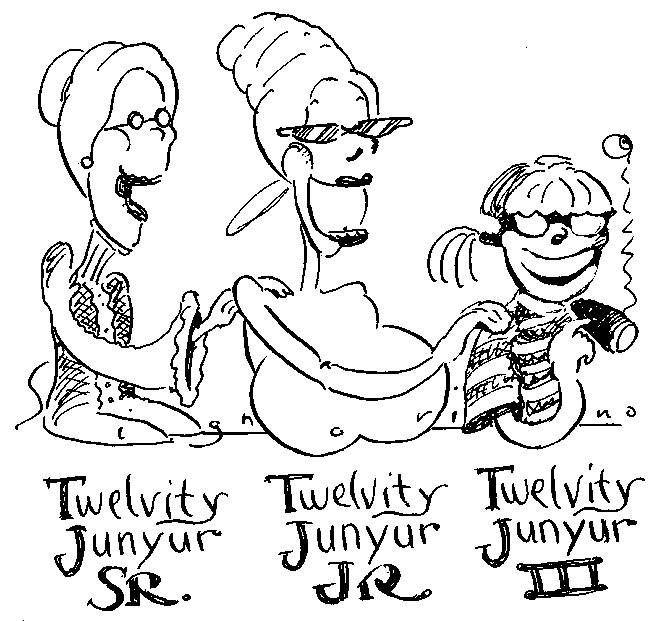 Baloney. I'll grant the two of you may not be chummy, but surely you've heard of that well-known Englishwoman Elizabeth II.

You may think monarchical naming practices have nothing to do with your question. But they do. They illustrate what's going on here: the progeny who need to be conspicuously numbered (or anyway ordered chronologically) are the ones who rule—and generally, though not always, they've been male.

I don't mean to overemphasize the fell hand of the patriarchy. Naming a child is above all a practical matter. The first order of business is to identify what family or tribe you belong to—in ancient times, and to a considerable extent now, these were the people who'd have your back.

That done, you needed a name to distinguish you from your relatives. In principle, nothing prevents parents from inventing names for this purpose; in practice, the number of widely used given names in most societies is relatively small. To avoid duplication, a common practice has been to pile on additional names or suffixes.

Some of these were less imaginative than others. When the early Romans needed to keep their kids straight, they evidently numbered them. The Roman emperor we know as Augustus was in his youth called Octavian, from the Latin for eighth. That's not because Augustus himself was the eighth-born child; by the emperor's day, Octavian was a family name and had lost any strictly numerical significance. But perhaps one of his ancestors had been.

For girls in classical Rome, though, sequential naming remained literally descriptive, since all girls in a family bore the same name, the feminine form of the family name, often without any distinguishing given names. Thus, sequential names: the daughters of the general Scipio Africanus, whose family name was Cornelius, were known as Cornelia Africana Major and Cornelia Africana Minor—Big Cornelia and Little Cornelia.

But these were birth-order names. Matters get more interesting when we turn to generational names—naming a kid after a parent or other ancestor.

Giving children patronymics—names derived from those of their fathers—is standard practice in some cultures. Vladimir Putin's middle name is Vladimirovich, son of Vladimir, because (duh) that was his dad's name too. Russian women have patronymics as well: e.g., Svetlana Iosifovna Alliluyeva, named after her father, Joseph Stalin.

Use of matronymics, on the other hand, is rare. In the 1800s it was sometimes taken as the mark of a bastard, whose father either wasn't known or had disowned the child. And no, the practice common in Spanish-speaking countries where a child receives family names from the father's and mother's sides—e.g., Gabriel García Márquez, son of Gabriel Eligio García and Luisa Santiaga Márquez Iguarán—doesn't really count as an exception: what's combined there are, effectively, the family names of the kid's father and maternal grandfather.

Clearer exceptions do exist: in Greek literature the hero Achilles is sometimes identified as "Achilles, son of Thetis," a sea goddess. But there you go: Achilles's father was a mere mortal king, Peleus. Once the old man hooked up with Thetis, he was outranked.

You see my point. In a male-dominated world, a son named after his father is commonplace. A daughter named after her mother is fairly unusual, and a daughter whose naming is proclaimed with the title "Junior" or "II" betokens a woman—perhaps two women—of unusual stature. Consider a few modern examples:

• Winifred Sackville Stoner Jr. was a child prodigy given a classical education as a toddler by her like-named mother. She reputedly spoke six languages, was typing at age 6, and had translated Mother Goose into Esperanto by age 8. A prolific versifier, she's best remembered for the couplet "In fourteen hundred ninety-two/ Columbus sailed the ocean blue."

• Broadcast journalist Dorothy Fuldheim applied the "Jr." suffix to her similarly named daughter, who grew up to be a professor at Case Western Reserve University.

• Nancy Sinatra, daughter of Frank Sinatra and Nancy Barbato Sinatra, is sometimes referred to as Nancy Sinatra Jr. The senior Nancy is chiefly known for having been the wife of one entertainer and the mother of another. However, on the evidence of other women who named their daughters after themselves, I'll guess she's not someone I'd care to cross.