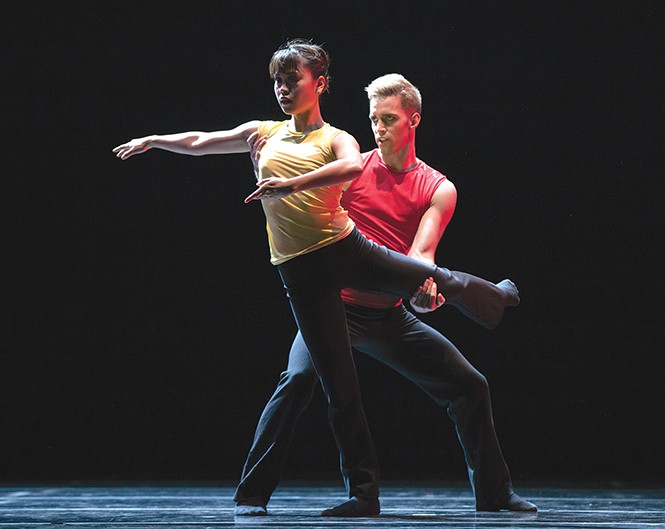 When Artistic Director Adam Sklute took the helm at Ballet West in 2007, one of the first and most daring ideas he implemented was a new program in the company's annual lineup: Innovations, a showcase for new ballet choreography created exclusively by members of Ballet West. The program looked to the future of the classical dance form, giving audiences a taste of contemporary work and offering creative opportunities to the company's dancers, making space for a new generation of art makers. Each season since that first year, Innovations has been the season finale for Ballet West—until now.

Instead, the company concludes its season with a brand new endeavor called the National Choreographic Festival. Innovations still exists but on a smaller scale; this year, it was performed in Park City, and not as part of the regular season. Though this is the National Choreographic Festival's first season for audiences, it has been a long six years in the making for Sklute, and a lot might hinge on the extent of its early success. If everything goes as planned, Sklute says the event could become Utah's next Sundance Festival, but for dance, presenting exclusive world premieres—something that would place Salt Lake City decisively at the vanguard.

"As we move along," he says, "I see this festival developing fringe fest offshoots, modern dance showcases and competitions."

During this inaugural season, the National Choreographic Festival runs for two consecutive weekends, hosting four visiting professional dance companies—Sarasota Ballet and Pennsylvania Ballet on opening weekend; Pacific Northwest Ballet and Oregon Ballet Theater on closing weekend. It also features new works by seven internationally renowned choreographers: Richardo Graziano, Trey McIntyre and Nicolo Fonte on the first weekend; and Helen Pickett, Annabelle Lopez, Val Caniparoli and Oliver Oguma on the second. Ballet West company members still get their hour on the stage, performing three of the seven works—those by Caniparoli, Oguma and Fonte—but the participation of other accomplished groups from across the county is, according to Sklute, an essential part of this new project.

It's not that Ballet West couldn't take a piece from any of these great choreographers and do it justice. Our local group has proved itself more than capable of tackling some of ballet's most explorative, modern works. In 2015, Ballet West was invited to perform at New York City's Joyce Theater after catching the eye of its executive director. There, Ballet West premiered Pickett's Games. The choreographer and educator's newest piece, Terra, is included in this inaugural festival. Games, a sexually charged piece about a love triangle, was a risky choice for Utah audiences, but when the company took the performance on tour, the dancers were praised by New York critics.

When Terra comes to the Eccles, it will be performed by dancers from the Oregon Ballet Theater, for whom the piece was commissioned. Sklute, for one, is excited to see how Pickett's choreography fits with other performers. "Choreography looks so different when created on different dancers," he says. "Each company has their own unique style and look." Seeing these variances of style—not just between choreographers, but among the companies—is part of what makes this festival such an amazing opportunity.

Of course, the one work that Sklute is most excited for audiences to see is that of Ballet West's resident choreographer, Fonte. "I adore his work, obviously," says Sklute, who hired him in 2012. "But I really think this is shaping up to be his best." Fonte's Fox on the Doorstep tells a personal story: Not long ago while working in Aspen, Colo., the choreographer opened the back door of his mountain cottage to find a rare white fox staring back at him. The animal calmly studied him, then turned into the woods. Hours later, Fonte received word that his father had passed away. "This piece is his way of working through that whole experience," Sklute says. "It's really moving, melodic and emotionally powerful. The dancers are diving into this with their bodies, heart and soul."

What Sklute has managed to pull off for this first National Choreographic Festival is nothing short of amazing. After years of reaching out to other organizations—being thwarted by busy touring schedules or the beginning of other companies' summer breaks—it is no small feat to have rounded up four in-demand companies for this Salt Lake City engagement. But this might not be as big as it ultimately gets.

"I want to get to point where we are able to invite every company in America, big and small, so the public can really see what's out there," Sklute says.